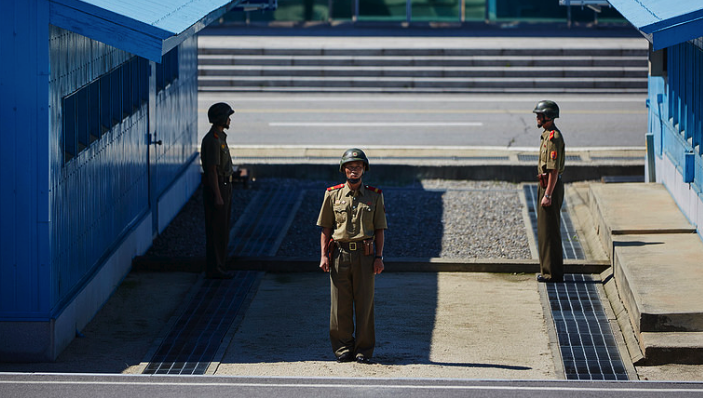 The two Koreas and the U.S. could declare an end to the Korean War before Pyongyang’s complete denuclearization, the South’s unification minister said on Tuesday.

Speaking at a policy briefing at the National Assembly’s Foreign Affairs and Unification Committee, Minister of Unification Cho Myoung-gyon said discussions between the two Koreas and the U.S. have sought to declare the formal end of the Korean war within the year.

“I think we can declare the end to the war… before the North achieves complete denuclearization,” he said.

The unification minister explained that a declaration of the end to the war could be possible “if the North takes sincere measures” to denuclearize, citing the dismantlement of the Punggye-ri nuclear test ground and reported scaling-down of facilities at the Sohae Satellite launch site as recent examples of the DPRK’s good faith.

Kim Yong Chol, vice-chairman of the North’s Central Committee of the Workers’ Party of Korea (WPK), told Cho that Pyongyang had prepared for the destruction of a missile test site in accordance with the DPRK-U.S. agreement in June, the minister said.

The two officials held talks in early July, when a South Korean delegation led by Cho visited Pyongyang for a series of inter-Korean basketball matches.

When asked on Tuesday if the reported dismantlement of the Sohae Satellite Launching Station could be a precondition for the declaration, Cho said a “comprehensive judgment is required” before providing an answer.

“The government’s clear stance is that the declaration of the end to the war is necessary at the current stage to provide the impetus for the North’s denuclearization and to start discussions on the peace regime,” the minister told lawmakers.

Cho’s comments appear to partially contradict a statement by the U.S. State Department on Monday, in which a spokesperson told the South’s Yonhap News Agency that “a peace mechanism with the goal of replacing the Armistice agreement” could only be possible “when North Korea has denuclearized.”

The Moon administration has strived to speed up negotiations between the DPRK and the U.S. “through multiple channels,” Cho said on Tuesday.

When asked why the DPRK-U.S. negotiation remain deadlocked, the minister told lawmakers time was needed to create a favorable atmosphere for diplomacy considering “70 years of hostile relations” and the severity of the nuclear issue.

“North Korea has put various efforts to achieve the denuclearization and resolve the nuclear issue in its own way,” Cho said.

“It appears that North Korea judges that its counterpart’s measures are insufficient.”

Pyongyang hopes that the U.S. will provide with a “concrete proposal” regarding its June pledge to give the North security guarantees, he added.

Following high-level DPRK-U.S. talks earlier in the month, the North’s foreign ministry denounced the Trump administration for not taking steps towards a peace regime on the Korean peninsula.

The stalemate in talks was also linked to Pyongyang’s recent criticism of the Moon administration, Cho said on Tuesday.

“It’s cautious to assess the North’s various and complex intentions, but the North appears to feel frustrated at the postponement of the North-U.S. negotiation,” he said.

DPRK-run outlet the Arirang-Meari on Monday criticized Seoul for not putting “active efforts” into declaring an end to the Korean War, just days after ruling party organ the Rodong Sinmun condemned ROK President Moon Jae-in for making “presumptuous remarks” on the nuclear issue.

Tuesday also saw the Ministry of Unification (MOU) say it hopes to open permanent representative offices in Seoul and Pyongyang following the establishment of a liaison office with resident representatives at the Kaesong Industrial Complex (KIC).

“We plan to establish a round-the-clock channel for consultation between authorities by opening the inter-Korean joint liaison office in August,” the ministry said in a report submitted to the Foreign Affairs and Unification Committee and carried by local outlets.

The MOU said it will use the office for discussions on forest, railway, and road cooperation and Seoul’s “New Economic Map Initiative of the Korean peninsula” plans, before expanding the scope of the discussion to inter-Korean relations.

“We will expand and develop [the joint inter-Korean liaison office] to permanent representative office in Seoul and Pyongyang considering the progress in the improvement of inter-Korean relations,” the report said.

Cho also on Tuesday told lawmakers the UN sanctions committee had granted an exemption to the South Korean government to repair facilities at Mount Kumgang for a planned reunion event of separated families in August.

The two Koreas and the U.S. could declare an end to the Korean War before Pyongyang’s complete denuclearization, the South's unification minister said on Tuesday.

Speaking at a policy briefing at the National Assembly’s Foreign Affairs and Unification Committee, Minister of Unification Cho Myoung-gyon said discussions between the two Koreas and the U.S. have sought to declare the formal end of the Korean war within the year.