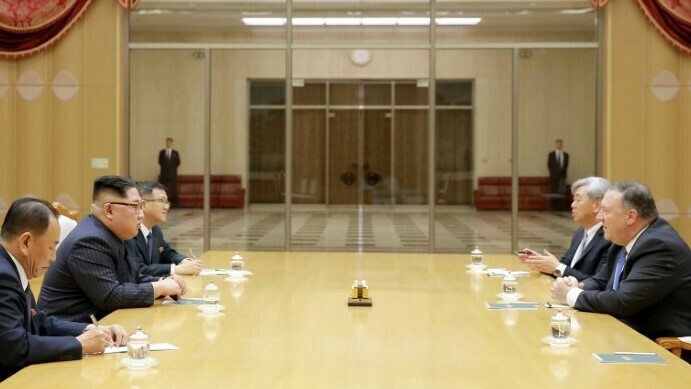 North Korean leader Kim Jong Un would like to see U.S. private sector investment in his country as part of the potential economic support that could be provided by the U.S. in a denuclearization deal, Secretary of State Mike Pompeo said on Wednesday.

The comments were made during testimony at the House Foreign Affairs Committee following a question from Committee Chairman Ed Royce regarding Pompeo’s assessment of Kim’s goals for the upcoming negotiations with the U.S. and President Donald Trump scheduled for June 12 in Singapore.

“Our demands have been unambiguous, when I spoke with him I could not have been clearer about the scope of the verification work that would be required all of the elements that would be necessary in order for America to understand that there had been real denuclearization, he took those onboard,” Pompeo said, drawing from his prior talks with Kim in Pyongyang.

“In return, he made clear it was important to him that when that time came and when those objectives had been received that he would receive economic help from America in the form of private sector businesses, knowledge know-how, from others perhaps contributions, foreign assistance and the like,” he added.

The Secretary of State also added that the North Korean leader “shared candidly” that he understood that the economic growth that would benefit his country would depend on a “strategic shift” from the DPRK.

Pompeo had previously referred to the possibility that U.S. private companies becoming involved in the DPRK market and invest in the country as a result of North Korea denuclearizing.

Speaking publicly about the potential June 12 summit, Trump has also made comments about the economic benefits North Korea would gain should a denuclearization deal be made.

During his testimony, however, Pompeo reiterated that the administration would be seeking the complete, irreversible and verifiable denuclearization of North Korea.

“The model that we have laid forth is the rapid denuclearization, total and complete. That won’t be extended over time,” he said.

He also expressed his opinion that thus far the U.S. has made no concessions at all to the DPRK to date and that it has no intention of doing so prior to a deal.

Pompeo also said that he had raised the issue of North Korean human rights but avoided answering directly to a question from Congressman David Cicilline as to whether or not human rights assurances would be part of any deal with North Korea.

“The issue was raised directly between me and Chairman Kim and will be part of the discussions as we move forward,” the Secretary of State responded.

As for the likelihood of the summit taking place on June 12, which has been thrown into doubt this week, Pompeo said that was in Kim’s hands.

“That decision will ultimately be up to Chairman Kim. He asked for the meeting the president agreed to meet with him, I’m very hopeful the meeting will take place,” he said.

North Korean leader Kim Jong Un would like to see U.S. private sector investment in his country as part of the potential economic support that could be provided by the U.S. in a denuclearization deal, Secretary of State Mike Pompeo said on Wednesday.The comments were made during testimony at the House Foreign Affairs Committee following a question from Committee Chairman Ed Royce regarding