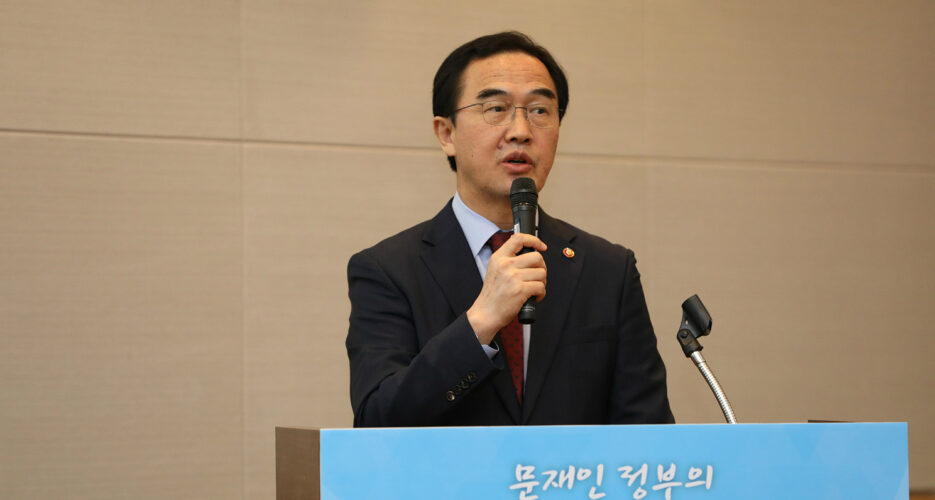 The difference in position between North Korea and the U.S. on the denuclearization issue remains “huge,” South Korea’s unification minister said on Wednesday, while insisting it would “not be impossible” to find a middle ground.

Speaking at a policy briefing for EU ambassadors in Seoul, unification minister Cho Myoung-gyon said that preparations for an upcoming North Korea-U.S. summit were ongoing, despite “temporary difficulties.”

“The difference of the position between the North and the U.S. in the denuclearization of the Korean peninsula is still huge,” Cho said during an opening statement carried by South Korea’s Yonhap News Agency.

“It won’t be easy to narrow this gap and coordinate with each other, but our judgment is that it’s not impossible.”

Cho said the South Korean government believes that Pyongyang and Washington were likely to reach a deal on the denuclearization of the Korean peninsula.

“Our assessment is that they will reach a compromise,” Cho said, adding that Seoul believes “it is desirable that the U.S. and the North reach a package deal on the North’s denuclearization and guarantees of regime security.”

Cho’s comments comes as Washington and Pyongyang hold a number of working-level meetings on the previously-canceled DPRK-U.S. summit.

But events in the days that followed have suggested that the summit could still take place.

As of Wednesday, both the U.S. and North Korea appear to be preparing once again to hold the planned Singapore June 12 summit, with three separate rounds of negotiations in the works.

A day after a surprise second meeting between ROK President Moon Jae-in and Kim Jong Un on Saturday, a U.S. team led by current Ambassador to the Philippines Sung Kim met with North Korean vice foreign minister Choe Son Hui on the northern side of Panmunjom.

Neither side has released details on the progress of the talks, and U.S. State Department spokesperson Heather Nauert said during a press briefing on Tuesday the two sides “plan to have additional meetings this week.”

South Korea’s Yonhap News Agency on Wednesday appeared to confirm that talks were ongoing, releasing a photo it claimed was of the U.S. delegation’s convoy crossing the Unification Bridge in Paju on its way to Panmunjom.

State Department spokesperson Nauert told press on Tuesday that Kim was set to meet with U.S. Secretary of State Mike Pompeo during his U.S. visit.

Kim Yong Chol, who serves as vice-chairman of the Central Committee of the Workers’ Party of Korea (WPK) and director of the United Front Department of the WPK Central Committee, appeared alongside Kim Jong Un at Saturday’s surprise inter-Korean summit.

He also met the U.S. Secretary of State during Pompeo’s second visit to Pyongyang in early May.

Nauert the following day said the team was “conducting logistics of the expected summit.”

North Korean media is yet to confirm the participation of any of its representatives in talks with U.S. officials this week.

And while the U.S. side has confirmed names of those officials, details about the content of what will likely be highly-sensitive talks remain scant.

A U.S. embassy spokesperson in Seoul on Wednesday declined to provide further information on the ongoing talks when contacted by NK News.

The South Korean unification minister on Wednesday also weighed in on recent discord between the North and the U.S. and the ongoing meetings.

“They didn’t know well about the position of the other side at the early stage even after agreeing to hold the North-U.S. summit,” he said.

“There was the temporary ‘up and down’ which we witnessed last week… as both waited for the other side to present its position first, but they have been holding discussions and exchanging views in earnest.”

The difference in position between North Korea and the U.S. on the denuclearization issue remains “huge,” South Korea's unification minister said on Wednesday, while insisting it would "not be impossible" to find a middle ground.

Speaking at a policy briefing for EU ambassadors in Seoul, unification minister Cho Myoung-gyon said that preparations for an upcoming North Korea-U.S. summit were ongoing, despite “temporary difficulties.”