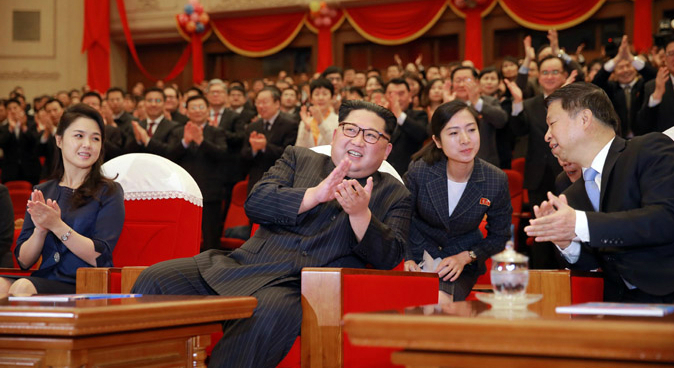 Amid several days of cultural events in the DPRK capital, Kim and his wife Ri Sol Ju last night attended a performance of the “Red Women Company” ballet staged by a Chinese performing squad at the East Pyongyang Grand Theatre.

The art troupe, composed of more than 200 people  – including artists from the National Ballet of China – arrived in Pyongyang on Friday to participate in the 31st April Spring Friendship Art Festival (ASFAF) held between April 11 and 17.

KCNA on Tuesday reported Kim had held talks with Song and other Chinese officials “in a warm atmosphere.”

“(Kim) expressed expectation that the Pyongyang visit by the Chinese art troupe would serve as a significant occasion in carrying forward and further consolidating the tradition of the DPRK-China friendship, the common treasure,” KCNA said in an English-language report.

“He highly estimated that the Chinese art troupe… gave the warm feelings of friendship of the Chinese people to the Korean people on this occasion.”

In response to Kim’s overture, Song expressed his desire to “deepen exchanges in the cultural and art field” in accordance with the intention of Kim and Chinese President Xi Jinping, in order to “wonderfully preserve, consolidate and develop the China-DPRK friendship.”

After the show, Kim and Ri met the Chinese performers, “congratulated them on their successful performance,” and took a group photograph.

Song’s visit came less than three weeks after a surprise trip by the North Korean leader to Beijing, where he held a summit with President Xi.

The meeting – Kim Jong Un’s first with a foreign leader since coming to power in 2011 – followed a year of poor relations between Beijing and Pyongyang, exacerbated by repeated missile tests by the DPRK and China’s increasing support for international sanctions.

The two leaders used the March summit to agree to expand exchanges between Pyongyang and Beijing, and saw Xi accept an invitation to visit the DPRK in the near-future.

First lady Ri Sol Ju on Saturday watched a performance of “Giselle” at the Mansudae Art Theatre, the first concert by the Chinese art troupe at the 31st ASFAF.

Song held a meeting with the DPRK leader on Saturday, with KCNA reporting that both exchanged “profound views on the important matters of mutual concern” as well as the international situation.

The North Korean leader said he would seek to “positively carry forward and develop the traditional DPRK-China friendship into a fresh phase of development as required by a new era.”

Kim proposed the further strengthening of ties between the Workers’ Party of Korea (WPK) and the CPC through exchanges of high-level delegations and boosting cooperation in a variety of sectors.

“Song Tao said that they would make a fresh contribution to promoting the prolonged and stable development of the China-DPRK relations…,” KCNA reported.

Ri Su Yong, Politburo member, vice-chairman of the WPK Central Committee, and chairman of the Foreign Affairs Committee of the DPRK Supreme People’s Assembly also held a meeting with Song on Saturday.

Both sides “exchanged deep views on further developing the relations between the WPK and the CPC” based on agreements made at last month’s Kim-Xi summit.

The International Department of the WPK Central Committee hosted a reception for the Chinese performing squad at Pyongyang’s Koryo Hotel the same day.

Kim Yo Jong, first vice department director of the WPK Central Committee, visited the accommodations of the Chinese art troupe on Friday and “once again and exchanged greetings and had a talk with Song Tao in an amicable atmosphere,” according to KCNA.

Amid several days of cultural events in the DPRK capital, Kim and his wife Ri Sol Ju last night attended a performance of the “Red Women Company” ballet staged by a Chinese performing squad at the East Pyongyang Grand Theatre.