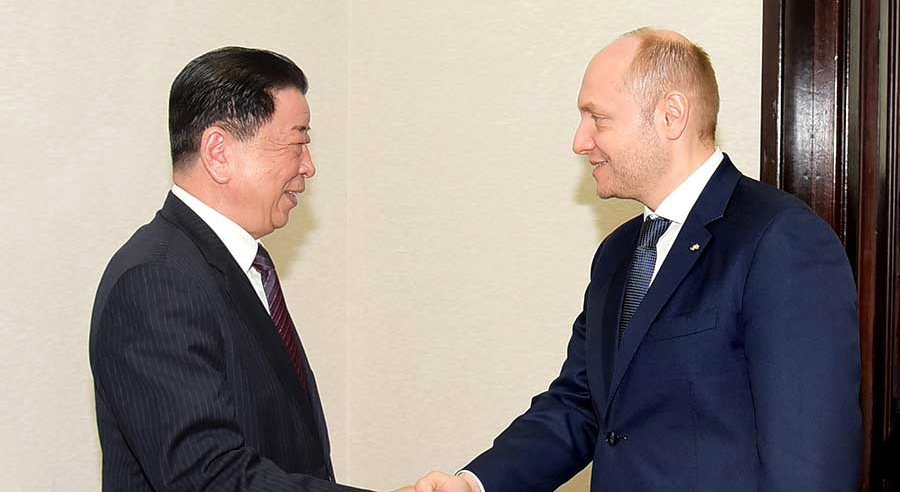 Moscow has set up a working group to draw up plans for a new bridge across the Tumen River on the DPRK-Russian border, the country’s Ministry for the Development of the Russian Far East said on Wednesday.

The statement followed a meeting between DPRK chairman of the state planning mission Ro Tu Chol and a Russian government economic delegation led by Minister for the Development of the Russian Far East Alexander Galushka.

The Russian group arrived in Pyongyang on Tuesday, returning home the following day.

“There are 23 automobile checkpoints between the DPRK and China, and not a single one with Russia,” DPRK minister Ro was quoted as having said in a statement released by the Ministry for the Development of the Russian Far East on Wednesday.

“Currently, when importing goods from the Far East, they do not come across the border with Russia, but through China. This greatly extends the path,” he added.

“It is necessary to consider the possibility of creating an automobile bridge across the Tumen River.”

Suggesting that a pre-existing railway bridge on the DPRK-Russian border could also be upgraded to allow cars to cross, the DPRK minister said the project could improve trade and economic relations.

In response to Ro’s suggestions, Galushka said the Russian government has instructed its Ministry of Transport to review the project and that a working group had already been set up.

“As a first step, we can consider the creation of a pontoon bridge,” said Galushka – referring to a form of semi-permanent floating bridge.

The Russian side reportedly asked Ro to instruct the relevant DPRK ministries to provide the working group with a start date “as soon as possible.”

The DPRK’s state-run Korean Central News Agency (KCNA) on Wednesday reported on the meeting between Ro and Galushka, but did not mention the construction project.

Plans for the two countries to build a new bridge along their shared border have been under discussion for several years, though appeared to have been put on hold.

October 2015 saw the Russian Ministry of Far East Development announce that Moscow and Pyongyang were in the process of reviewing plans to construct a new pontoon bridge on the border, having signed an agreement several months earlier.

The provincial government of Primorsky Krai in September 2016 said the DPRK and Russia would push ahead with plans to construct the pontoon bridge “regardless of sanctions.”

Anthony V. Rinna, an analyst on Russian foreign policy in East Asia for Sino-NK, said the construction of an automobile crossing could “help to alleviate any unforeseen problems, such as logistical or technical glitches that may undermine North Korea’s rail links” and diversify Pyongyang’s trade.

“North Korea and Russia, however, may be holding off on building anything permanent as of yet in the hopes that at some point in the future the whole peninsula will be connected to Russia,” he told NK News.

“Ideally, Russia wants to connect North and South Korea (be it by rail or gas pipeline).”

The Russian economic delegation’s visit also saw the group take part in the 8th meeting of the DPRK-Russia intergovernmental committee for cooperation in trade, economy, science and technology.

Russia’s Ministry for the Development of the Far East reported the two countries “discussed various issues of bilateral cooperation, including bilateral cooperation in the fields of transport, energy, industry, agriculture and fishery, education, science and technology, ecology and sports.”

Minister Galushka, DPRK Minister of External Economic Relations Kim Yong Jae, Russian ambassador to the DPRK Alexandr Matsegora and other officials attended the meeting, the first of its kind in three years.

Moscow and Pyongyang have long sought to boost bilateral cooperation in the field of transport, including in the ongoing Rajin-Khasan logistics project, despite international sanctions.

Moscow has set up a working group to draw up plans for a new bridge across the Tumen River on the DPRK-Russian border, the country's Ministry for the Development of the Russian Far East said on Wednesday.

The statement followed a meeting between DPRK chairman of the state planning mission Ro Tu Chol and a Russian government economic delegation led by Minister for the Development of the Russian Far East Alexander Galushka.