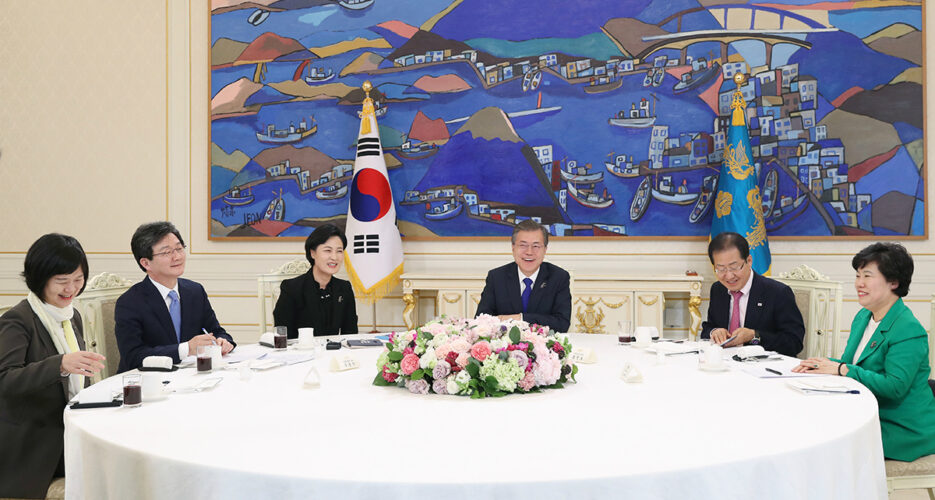 The talks saw the President warn against “hasty optimism” over recent DPRK statements on denuclearization, while stressing that their significance should not be understated.

“Nothing has been settled right now,” President Moon said. “Our view is that [Pyongyang] has met the U.S. conditions at least for selective, preliminary talks according to what we have been discussing with the U.S.”

The meeting with political leaders came a day after Seoul announced that DPRK officials had, during a two-day meeting in Pyongyang with a South Korean delegation, declared their “will to denuclearize” while expressing their “intention to have an open-hearted dialogue” with the U.S.

U.S. President Donald Trump previously said talks could happen “only under the right conditions,” with the State Department arguing Pyongyang would need to express a commitment to denuclearization.

President Moon Jae-in on Wednesday told party leaders that Seoul would not settle for simple nuclear nonproliferation or freeze.

“The ultimate goal that we should achieve is denuclearization,” he said.

Moon made the comments in response to comments by Hong Jun-pyo, chairman of the main opposition Liberty Korea Party (LKP), who expressed his concerns that Seoul would settle for a nuclear freeze and tentative suspension of ballistic missile launches.

The President conceded, however, that it would be hard to force North Korea to discard its nuclear program in a short space of time.

“It could be possible that we can reach a deal to achieve complete nuclear dismantlement through various roadmaps,” he said.

“Even though we suggested inexplicit measures such as ‘the entry of denuclearization is a freeze and the exit is the complete denuclearization,’ what is needed from now on is a more specific consultation.”

South Korean chief of National Security Office (NSO) Chung Eui-yong and Director of the National Intelligence Service (NIS) Suh Hoon are set to depart for the U.S. on Thursday morning to debrief American officials on their special delegation’s recent two-day visit to Pyongyang.

Chung and Suh and three other envoys on Monday evening met with North Korean leader Kim Jong Un and other senior officials including his sister Kim Yo Jong and Kim Yong Chol, who serves as director of the United Front Department of the Central Committee (C.C.) of the Workers’ Party of Korea (WPK).

In response to opposition politician Hong’s criticism on Wednesday that the results of the visit had been too favorable to Pyongyang, Moon said Seoul had judged that the DPRK had offered concessions “beyond expectations.”

“The inter-Korean summit and progress in dialogue between the South and the North must be accompanied by denuclearization,” the President added.

“Talks between the U.S. and North Korea are definitely needed to this end, and should speed up.”

Through the visit to Pyongyang, Moon said the ROK special envoys were able to confirm the position of Kim Jong Un on several key issues, including on upcoming South Korea-U.S. joint military drills.

During Wednesday’s meeting with political leaders, NSO chief Chung Eui-yong said the two Koreas have agreed that they will maintain warming inter-Korean relations during the upcoming drills.

“It has a great meaning that North Korea expressed its stance that they will not make the ROK – U.S. joint military drills a problem,” Chung said.

International sanctions “can’t be weakened” despite the recent inter-Korean rapprochement, the President said.

International sanctions could be eased based on the agreement of the international community after “substantial progress” in talks, the President added, stipulating that Seoul could not relieve them “arbitrarily.”

The talks saw the President warn against “hasty optimism” over recent DPRK statements on denuclearization, while stressing that their significance should not be understated.