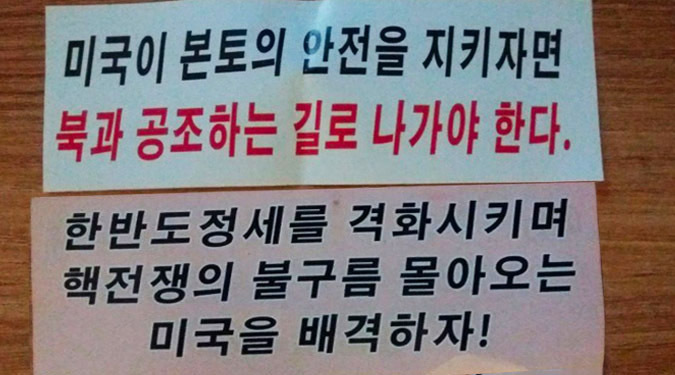 New pro-North Korean leaflets appeared in Seoul on Thursday, attacking the U.S. and praising the DPRK’s nuclear program, the first such material to be seen by NK News  since early February.

The source of the photos, who asked to remain anonymous due to South Korea’s laws regarding the dissemination of pro-Pyongyang material, said the leaflets were found “on the big road from Sangsu to Hapjeong” in east Seoul near the Han River.

“There were loads of them, I just picked up a couple,” the source said.

The leaflets did not feature the bright imagery or striking political cartoons of previous propaganda fliers that appeared in the South Korean capital in recent months.

They did, however, feature anti-American slogans and offered support for the North Korean nuclear program.

“If the U.S. wants to protect the safety of their territory, they must cooperate with the north,” one of the leaflets discovered says. “Bankrupt the U.S. weapon of mass destruction policy… with the north’s completed nuclear weapon!”

“Denounce the U.S. for driving a cloud of fire of nuclear war and intensifying the situation on the Korean peninsula,” another read.

Other designs appeared to make reference to an upcoming inter-Korean summit – set to take place in April – and echoed North Korean state media’s recent warnings that U.S. hardliners could “spoil the atmosphere.”

“South Korean people, let us arouse the public awareness of the U.S. making mischief by attempting to ruin the major event of the Korean peninsula,” the leaflet read.

Notably, the leaflets did not acknowledge the emergence of a U.S.-DPRK summit, echoing the ongoing mute of North Korean state media on the subject.

Meanwhile, Asian Economy on Thursday reported that other leaflets had been found in Yongsan-gu, in southern Seoul, attacking the South Koreans government for having thanked the U.S. President for his support in achieving inter-Korean dialogue.

“The nerve they have to thank Trump, when they cannot even acknowledge the North’s magnanimous generosity!” a leaflet posted by Asian Economy said. “What kind of fatuous nonsense is that?”

“Government, stop saying nonsense about how your family business goes well thanks to the support of others,” another leaflet declared.

Pro-North Korean and anti-American leaflets frequently appear in South Korea’s capital, but some question whether or not they come from the DPRK .

The regular locations they are often found in, however, suggests to experts that they have been sent from the North by balloon.

Pastor Eric Foley, whose Seoul-based NGO Voice of the Martyrs regularly sends balloons to the North, has told NK News that the flight patterns of the leaflets – as well as the seasonal ebb and flow of their appearances in Seoul – suggest they are being sent from the DPRK.

“The discovery of flyers repeatedly in the same locations does not rule out balloon launching, nor does the lack of discovery of balloon remnants,” he said in February. “In fact, both of those things would be consistent with balloon launching and with North Korea’s past launch activities.”

The content of the leaflets, too, has shifted substantially in the past year. The final months of the Park Geun-hye administration in the South saw the pamphlets feature crude cartoons often depicting the ROK President leader as worthy of death.

Tensions with the U.S. and South Korea later in the year saw them continue to take a strident tone – this time against President Trump and ROK President Moon Jae-in.

Another common theme has been to promote North Korean ideology through the celebration of the nation’s political system, anniversaries, and emerging weapons systems.

But as NK News has reported since early January, leaflets coming to South Korea have since drastically changed in tone and design.

New pro-North Korean leaflets appeared in Seoul on Thursday, attacking the U.S. and praising the DPRK's nuclear program, the first such material to be seen by NK News  since early February.

The source of the photos, who asked to remain anonymous due to South Korea's laws regarding the dissemination of pro-Pyongyang material, said the leaflets were found “on the big road from Sangsu to Hapjeong” in east Seoul near the Han River.

Tia Han is an NK News contributor based in Seoul, South Korea.