North Korea expressed “will” to denuclearize if security guaranteed: Seoul 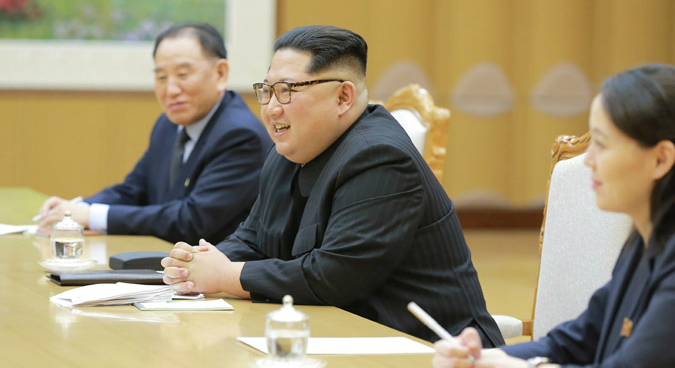 North Korean officials during meetings with South Koreans over the last two days expressed their “will” to denuclearize if the DPRK’s security is guaranteed, Seoul announced on Tuesday.

In a statement following the return of a high-level ROK delegation to Seoul, South Korea’s chief envoy to the talks said Pyongyang would freeze nuclear and missile tests “while dialogue continues,” and has agreed to a third summit at the Peace House in Panmunjom in late April.

The two Koreas will also establish a hotline between their two leaders in the near future, and the two are set to hold a phone call ahead of meeting next month.

The meeting between DPRK leader Kim Jong Un and South Korean President Moon Jae-in will be the first between leaders of the two Koreas since 2007 and the third in history.

“The North clarified its will to denuclearize the Korean peninsula, and made it clear that there is no reason to possess nuclear weapons if the security of the North Korean regime is guaranteed,” South Korea’s chief envoy to the talks Chung Eui-yong said.

“The North expressed their intention to have open-hearted dialogue with the U.S. to discuss the issue of denuclearization and to normalize the North-U.S. relations,” he continued, adding that the DPRK had “made it clear that they will not resume strategic provocations including additional nuclear tests and test-launches of ballistic missiles while dialogue continues.”

“At the same time, the North commits to not use nuclear as well as conventional weapons against the South.”

Pyongyang has also invited South Korean Taekwondo demonstrators and a performing squad to the DPRK capital, to reportedly “continue the atmosphere for dialogue and reconciliation” between the two Koreas.

“Chairman Kim said the denuclearization issue may be discussed as an agenda for the North-U.S. dialogue,” an unnamed South Korean official also told reporters on Tuesday at a closed-door briefing following the delegation’s return.

“What we must especially pay attention to is the fact that (he) has clearly stated that the denuclearization of the Korean Peninsula was an instruction of his predecessor and that there has been no change to such an instruction.”

Responding to the news of the summit, U.S. President Donald Trump tweeted on Tuesday: “We will see what happens!”

The South Korean delegation returned from a two-day visit to the North at 1758 KST.

The envoys were hosted in Pyongyang by Kim Jong Un on Monday evening, in the first such meeting between South Korean officials and the North Korean leader since Kim came to power in 2011.

In a report carried by the North’s state-run Korean Central News Agency (KCNA) on Tuesday morning, Kim Jong Un was reported to have said the two Koreas had come to a “satisfactory agreement” during the meeting.

The KCNA reported that Chung Eui-yong had delivered a personal letter from South Korean President Moon Jae-in to the North Korean leader.

“Hearing the intention of President Moon Jae In for a summit from the special envoy of the South side, he exchanged views and made a satisfactory agreement,” KCNA reported in an English-language dispatch on the meeting.

Also in attendance on Monday night were, among others, Kim Jong Un’s sister and first vice department director of the Central Committee (CC) of the Workers’ Party of Korea (WPK) Kim Yo Jong and Kim Yong Chol, vice-chairman of the WPK CC and director of the United Front Department of the WPK CC.

Both visited the South last month, with Kim Yo Jong’s trip seeing her extend an invitation to Pyongyang to South Korean President Moon Jae-in.

Kim Yong Chol’s visit, too, saw the DPRK official express the North’s desire to hold dialogue with the United States.

In response to Kim’s comments, White House Press Secretary Sarah Huckabee Sanders told press last week that denuclearization would be a deciding factor in approaching any talks with the DPRK.

“They have expressed a desire to hold talks. But let us be completely clear: Denuclearization must be the result of any dialogue with North Korea,” she said.

Officials from the two Koreas held follow-up talks on Tuesday ahead of the ROK delegation’s return to the South on “specific measures to realize the will” of the two Korean leaders.

“Through this, we could confirm that the South and North Korean leaders have a firm will for a peace settlement on the Korean peninsula and the improvement of inter-Korean relations,” Chung said during Tuesday’s news briefing.

Chung and Suh are now scheduled to fly to the U.S. to brief Washington officials on the results of the South Korean special delegation’s visit to Pyongyang, the NSO chief added.

After the debriefing in the U.S., Chung will visit China and Russia while Suh heads to Japan.

“We also continue to strive to develop the inter-Korean relations stably based on international support and cooperation,” Chung said at the news conference.

North Korean officials during meetings with South Koreans over the last two days expressed their “will” to denuclearize if the DPRK's security is guaranteed, Seoul announced on Tuesday.

In a statement following the return of a high-level ROK delegation to Seoul, South Korea's chief envoy to the talks said Pyongyang would freeze nuclear and missile tests “while dialogue continues," and has agreed to a third summit at the Peace House in Panmunjom in late April.