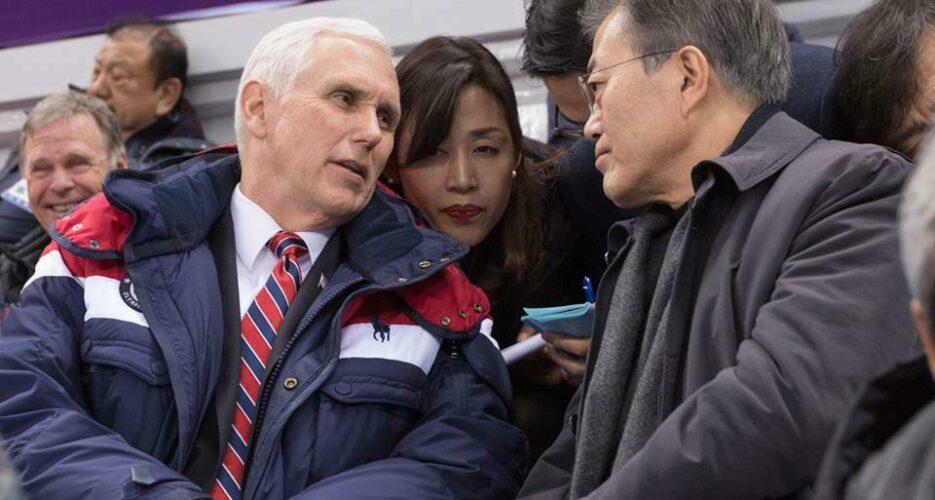 The statement appears to represent a significant shift in the U.S. position on North Korea – which has until now been that Pyongyang would have to agree to talking about complete, verifiable and irreversible denuclearization.

“The point is, no pressure comes off until they are actually doing something that the alliance believes represents a meaningful step toward denuclearization,” Pence told the Washington Post on Air Force Two.

“So the maximum pressure campaign is going to continue and intensify. But if you want to talk, we’ll talk.”

When asked what Pyongyang could do to relieve some of the sanctions, the Vice President said “I don’t know… That’s why you have to have talks.”

Relaying his conversations with South Korean President Moon Jae-in, the Vice President said he has been assured that North Korea would not receive any “economic or diplomatic benefits” in exchange for dialogue.

Any economic concessions to the North would be reliant on steps towards denuclearization – a pledge which, Pence said, meant the U.S. would be prepared to support DPRK-ROK engagement in the future.

One specialist said that while dialogue between Pyongyang and Washington was welcome, it was difficult to see North Korea making any concessions on its nuclear program in the near future.

“We will have to see what happens,” Daniel Pinkston, a North Korea watcher at Troy University, told NK News. “There are reasons and incentives for both sides to talk in order to avoid misperceptions and miscalculations that could trigger conflict that otherwise is avoidable.”

“The long-term objective must be denuclearization, as stated in the Rogin article. Whether that goal is achievable is partially dependent upon North Korea modifying or abandoning the KWP’s ideology and at least part of the DPRK state identity.”

This is not the first time U.S. officials have in recent months suggested that Washington would be open to talks with the North without preconditions, however.

Secretary of State Rex Tillerson in December said the U.S. was willing to talk to North Korea “without precondition,” while stipulating that any dialogue would need to take place following a “period of calm.”

“It’s not realistic to say we are only going to talk if you come to the table ready to give up your program,” Tillerson told the Atlantic Council-Korea Foundation Forum in Washington DC.

The White House later appeared to  distance itself from the Secretary of State’s comments, with a spokesperson insisting “the President’s views on North Korea have not changed.”

But Pence’s comments come just a day after a North Korean delegation in the South delivered a message from DPRK leader Kim Jong Un to President Moon Jae-in inviting him to Pyongyang.

If the talks go ahead, they will be first between DPRK and ROK leaders in over a decade – but may exacerbate fears that North Korea is attempting to drive a wedge between South Korea and the United States.

The Blue House on Saturday said Moon wanted the two Koreas to “create the environment first for that (the visit) to be able to happen.”

Saturday saw Pence – who took great pains to avoid contact with the North Korean delegation while in the South – insist that there was “no daylight” between Seoul and Washington on DPRK policy.

Ahead of the Olympic Opening ceremony last week Pence also promised that the U.S. would soon unveil the “toughest and most aggressive round of economic sanctions on North Korea ever,” though did not offer further details.

The statement appears to represent a significant shift in the U.S. position on North Korea – which has until now been that Pyongyang would have to agree to talking about complete, verifiable and irreversible denuclearization.