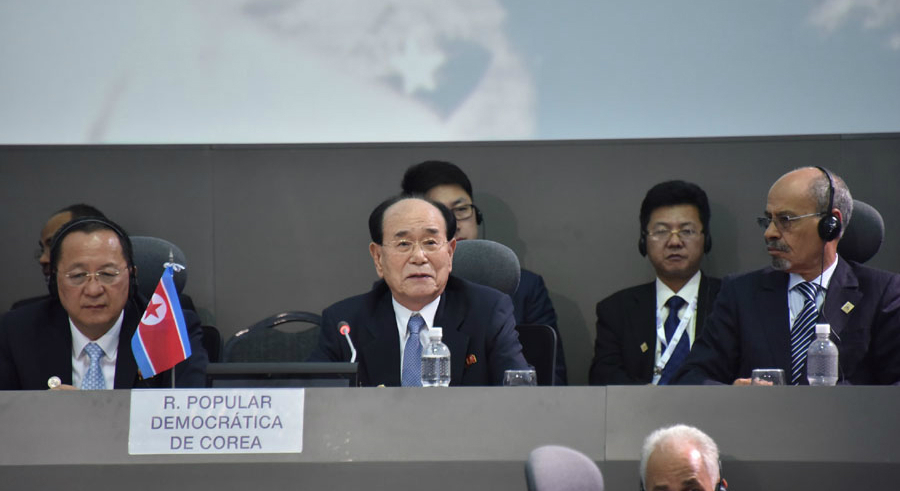 South Korea’s Ministry of Unification confirmed the news, saying in a statement that the North had conveyed the message on Sunday night in a note addressed to Seoul’s chief delegate to inter-Korean talks, unification minister Cho Myoung-gyon.

He will arrive in South Korea for the opening ceremony on Friday accompanied by three “members” and 18 supporting staff. The delegation will leave on Sunday.

A Presidential spokesperson told NK News that “nothing has been confirmed in that regard.”

Most recently he visited Iran in August last year to attend the inauguration ceremony of President Hassan Rouhani and oversee the opening of newly-constructed DPRK embassy in Tehran.

He also attended the last Winter Olympics in Sochi, Russia, in 2014, though he did not attend the 2016 Summer Olympics in Rio de Janiero, Brazil.

Choe Ryong Hae, Member of the Presidium of the Political Bureau of the Central Committee of the Workers’ Party of Korea (WPK), was instead chosen to attend the games – later visiting the South in 2014 for that year’s Asia Games in Incheon.

North Korea’s 2016 constitution instead describes Kim Yong Nam’s role as being responsible for “subpoenas and letters of credence from dignitaries of other nations.”

“The role of the SPA Chairman is actually closer to that of a monarch in most constitutional monarchies – a person responsible for ceremonies who does not have any political power apart from the right to meet the real head of state on a regular basis,” Tertitskiy said.

The two Koreas agreed on January 9 that Pyongyang would send a “high-level” group of officials to the upcoming games in South Korea, though details on the make-up of the delegation have remained sketchy.

His high stature in North Korean politics notwithstanding, Pyongyang’s decision to send Kim may also be driven by a desire to ensure that both international and South Korean sanctions are not violated.

Many high-ranking North Korean officials – including some linked to the country’s sports industry – have been designated and as a result are under travel bans.

“Had North Korea intended to send figures like Choe Ryong Hae, who last visited Seoul for the Asia games in October 2014, it would have put the South Korean government in a difficult position,” Chad O’Carroll, managing director of the Korea Risk Group – which owns and operates NK News – said.

“Choe, like several other senior North Korean officials, has been sanctioned by both the U.S. and ROK via unilateral sanctions, meaning that Seoul would have had to temporarily obtain permission to facilitate any trip.”

South Korea's Ministry of Unification confirmed the news, saying in a statement that the North had conveyed the message on Sunday night in a note addressed to Seoul's chief delegate to inter-Korean talks, unification minister Cho Myoung-gyon.