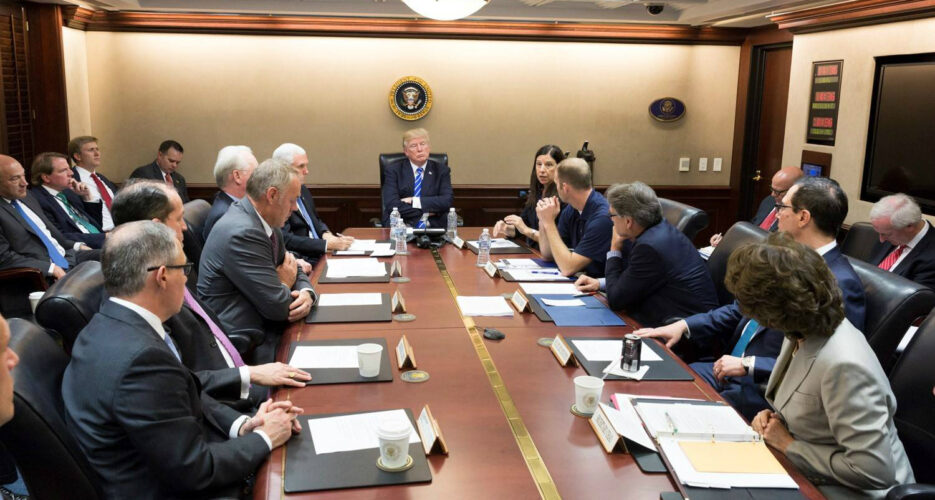 U.S. President Donald Trump on Tuesday warned that he has a nuclear button which is “more powerful” than the one mentioned by North Korea’s leader during his New Year speech.

The comment came around 48 hours after Kim Jong Un sent a nuclear warning to Washington, reminding it that the entire U.S. mainland is within the striking range of North Korea’s nuclear weapons.

Kim also suggested that Pyongyang can attack the U.S. at any time and that the U.S. would never be able to fight a war against him and the DPRK.

“North Korean Leader Kim Jong Un just stated that the “Nuclear Button is on his desk at all times,” Trump said on Twitter at 1950 EST.

“Will someone from his depleted and food starved regime please inform him that I too have a Nuclear Button, but it is a much bigger & more powerful one than his, and my Button works!”

This is not the first response from the U.S. President to Kim’s New Year speech. Trump on Tuesday morning showed a cautious attitude toward Kim’s overture to Seoul.

Kim used the speech to express willingness to send a delegation to the PyeongChang Winter Olympics hosted by South Korea and proposed Seoul hold a meeting between the North and South Korean authorities.

“Sanctions and “other” pressures are beginning to have a big impact on North Korea. Soldiers are dangerously fleeing to South Korea,” Trump said on his Twitter on Tuesday.

“Rocket man now wants to talk to South Korea for first time. Perhaps that is good news, perhaps not – we will see!”

When asked to comment on Kim’s remarks about having a nuclear button, Trump provided a simple answer Sunday night – “we’ll see, we’ll see” – outside a New Year’s Eve celebration at Mar-a-Lago in Florida.

But Trump’s changed position, accompanied by a fresh warning from U.S. ambassador to the United Nations Nikki Haley, follows media reports on Tuesday that the country could test-launch another missile.

Despite Kim offering a rare olive branch to the South, those reports follow his remarks which also called for the nuclear weapons research sector and rocket industry to “mass-produce nuclear warheads” and “deploy them for action.”

“We hear reports that North Korea might be preparing for another missile test,” Haley said. “I hope that does not happen. But if it does, we must bring even tougher measures to bear against the North Korean regime.”

The U.S. ambassador to the UN also said Washington wouldn’t take the option of resuming dialogue seriously unless the North expresses willingness to give up its nuclear weapon, while Seoul made the official proposal for the inter-Korean talks.

One day after Kim delivered his New Year speech, South Korean unification minister Cho Myoung-gyon proposed the North to hold high-level government talks at the Peace House in the South Korean side of Panmunjom on January 9.

“North Korea can talk to anyone they want, but the U.S. is not going to recognize it or acknowledge it until they agree to ban the nuclear weapons that they have,” Haley later told media.

Despite concerns that the DPRK may seek to drive a wedge between the U.S. and the South by suggesting the inter-Korean talks, both countries said Seoul’s decision was based on coordination.

Cho said Seoul has been “closely consulting with concerned countries, including the U.S” during Tuesday’s special news conference.

White House press secretary Sarah Sanders also said Tuesday that Washington and Seoul are “in close contact with those people about a unified response” when asked why Trump said North Korea’s willingness to talk to the South about the Olympics could be “good news.”

“Our policy on North Korea hasn’t changed at all. The United States is committed and will still continue to put maximum pressure on North Korea to change and make sure that it denuclearizes the Peninsula,”  she said during a regular news briefing.

“Our goals are the same, and we share that with South Korea, but our policy and our process has not changed in this.”

Sanders also said the Trump administration hasn’t “made a final determination” on whether they support the North Korean delegation participation in the PyeongChang Winter Olympics.

Seoul attempted to contact Pyongyang twice through communication channels between the two Koreas at a liaison office in Panmunjom twice since Cho made the announcement, the ministry added.

U.S. President Donald Trump on Tuesday warned that he has a nuclear button which is “more powerful” than the one mentioned by North Korea’s leader during his New Year speech.

The comment came around 48 hours after Kim Jong Un sent a nuclear warning to Washington, reminding it that the entire U.S. mainland is within the striking range of North Korea’s nuclear weapons.