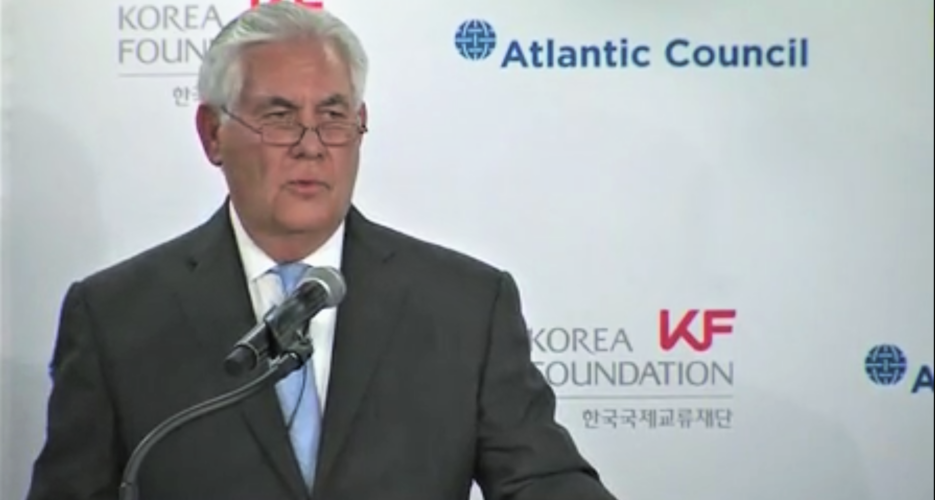 Washington is ready to meet with North Korean officials without preconditions, Secretary of State Rex Tillerson said on Tuesday.

Speaking at the Atlantic Council-Korea Foundation Forum in Washington DC, Tillerson appeared to backtrack from the U.S.’s longstanding position that talks with North Korea would only be possible if Pyongyang commits to denuclearization, though stipulated that any dialogue would have to follow a “period of quiet.”

“We’re ready to have the first meeting without precondition,” he said. “Let’s just meet. And we can talk about the weather if you want. We can talk about whether it’s going to be a square table or a round table if that’s what you’re excited about. But can we at least sit down and see each other face to face.”

“It’s not realistic to say we are only going to talk if you come to the table ready to give up your program.”

The Secretary of State also said, however, that the military option remains open.

“I will continue our diplomatic efforts until the first bomb drops,” Tillerson said, adding that while he was “confident” the U.S. would succeed, Secretary of Defense Mattis “will be successful if it ends up being his turn.”

The Secretary of State added that the U.S. has been engaged in discussions with China over contingency plans in the event of a regime collapse in the DPRK, particular on the securing of Pyongyang’s nuclear arsenal and on U.S. troop presence in the North.

The Secretary of State also said that while he was grateful of Russian support for recent United Nations Security Council (UNSC) resolutions against North Korea, the ongoing presence of DPRK laborers in Russia risked undermining their efficacity.

“They have economic development in the east in particular that they’re undertaking. So I understand why they have an economic stake in this,” he said. “But it is also undermining the effectiveness of the sanctions.”

Tillerson did not expand on how long the “period of quiet” would have to last before dialogue could be initiated. Late November’s launch by North Korea of the Hwasong-15 rocket followed over two months of no testing from the North – though Pyongyang does not typically conduct many missile tests or launches in the fourth quarter of the year.

When asked about the-then 30 day pause in testing, a State Department spokesperson told NK News in October that the “onus is on North Korea to take meaningful actions toward denuclearization and refrain from provocations.”

The Secretary of State’s comments come amid reports that Pyongyang is willing to engage in dialogue with the U.S. Last week Russian foreign minister Sergey Lavrov said that “North Korea wants, first of all, to speak with the United States about its security guarantees.”

But while Tillerson’s comments on dialogue on Tuesday appeared to represent a softening of the U.S.’s approach, the White House insisted on Tuesday that Washington’s position remained the same.

“North Korea is acting in an unsafe way not only toward Japan, China, and South Korea, but the entire world. North Korea’s actions are not good for anyone and certainly not good for North Korea.”

The White House has in the past sought to temper the more diplomatic rhetoric coming from Tillerson in recent months.

In October, in response to claims by the Secretary of State that attempts at dialogue between Washington and North Korea was in the works, President Trump tweeted that Tillerson was “wasting his time.”

Washington is ready to meet with North Korean officials without preconditions, Secretary of State Rex Tillerson said on Tuesday. Speaking at the Atlantic Council-Korea Foundation Forum in Washington DC, Tillerson appeared to backtrack from the U.S.'s longstanding position that talks with North Korea would only be possible if Pyongyang commits to denuclearization, though stipulated that any