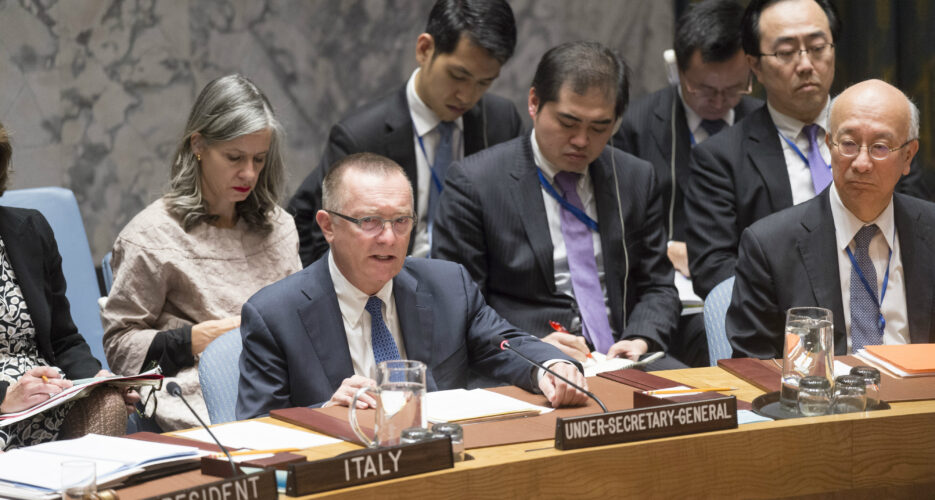 UN Under-Secretary-General for Political Affairs Jeffrey Feltman on Tuesday said that North Korea had not given any signs of a desire to engage in dialogue over its nuclear program during his visit last week to Pyongyang.

United Nations political affairs chief said his delegation had stressed its belief that Pyongyang needed to “signal” its willingness to engage in a dialogue.

“I think they listened seriously to our arguments… they didn’t offer any type of commitment to us at that point,” he said, when asked whether he sensed that Pyongyang was willing to talk to Washington.

“I think again, they have to reflect on what we said with their own leadership and I don’t want to try to suggest that I can read their minds or put words in their mouth.”

Feltman added, however, that his visit to Pyongyang has contributed to opening a door for dialogue, explaining that officials had agreed that it was “important to prevent war” on the Korean peninsula.

“In my professional career, this was certainly the most important mission that I’ve ever taken,” he told assembled media at a news conference after a closed-door briefing to the UN Security Council on his visit to the DPRK. “I felt the sense of responsibility on my shoulders throughout the time that I was there.”

“Time will tell what was the impact of our discussions, but I think we’ve left the door ajar, and I fervently hope that the door to a negotiated solution will now be opened wide.”

“The first in-depth political exchange of views between the UN Secretariat and the officials of Pyongyang in almost eight years” took place through the visit, Feltman said.

Feltman’s comments came soon after comments by U.S. Secretary of State Rex Tillerson suggesting was ready to resume talks with Pyongyang, without preconditions, should there be a “period of quiet.”

He is the highest-ranking UN official to travel to the DPRK since Valerie Amos, then-Under-Secretary-General for Humanitarian Affairs, in October 2011.

Feltman said that officials had “listened carefully” but voiced disagreements with his delegation during the 15 hour-long talks, and said that the country still needed time to review the issue “internally” and with its leadership.

“I emphasized the importance of opening or re-opening technical channels of communications, such as the military-to-military hotline, to reduce risks, signal intentions to prevent misunderstandings, and manage any crisis.”

Feltman said he urged Pyongyang to send a signal that “it was prepared to consider ‘talks about talks’,” suggesting that the UN and others could “facilitate both of those processes.”

But he declined to elaborate whether the DPRK officials signaled a willingness to pause its development of ballistic missiles and nuclear weapons, saying it was “not inappropriate” to characterize everything discussed behind closed doors.

Feltman also said the DPRK and the UN Secretariat shared views on the necessity of a “policy dialogue” given the “urgency” of the issue, but that they were yet to discuss details.

At the news conference, Feltman also said he had held discussions with UN colleagues and the diplomatic community during his visit to Pyongyang, discussing, among other things, the impact international sanctions were having on humanitarian aid.

“I also learned of an anticipated humanitarian funding shortfall that could seriously affect the ordinary citizens of the DPRK, who will need our generosity and help,” he said.

UN Under-Secretary-General for Political Affairs Jeffrey Feltman on Tuesday said that North Korea had not given any signs of a desire to engage in dialogue over its nuclear program during his visit last week to Pyongyang.United Nations political affairs chief said his delegation had stressed its belief that Pyongyang needed to “signal” its willingness to engage in a dialogue.“I think