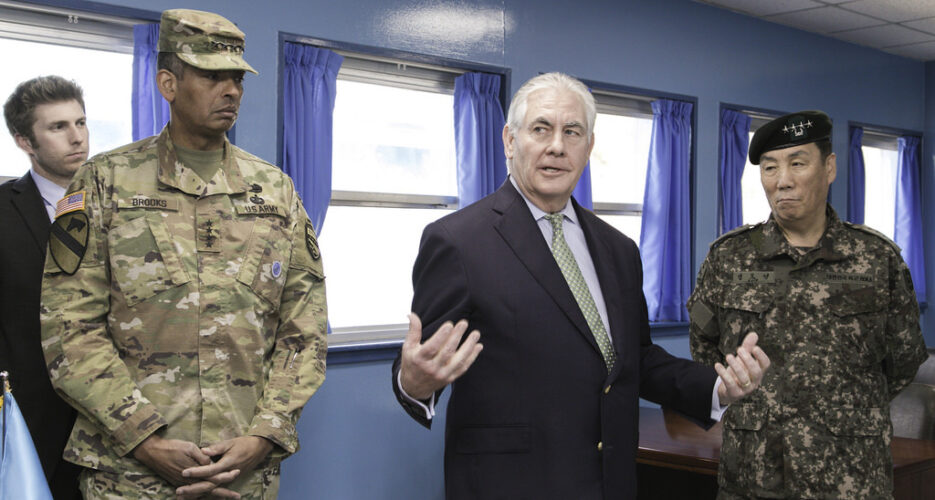 North Korea’s state newspaper said in an editorial Tuesday that the country is not interested in U.S. Secretary of State Rex Tillerson’s suggestion of talks without preconditions.

The Rodong Sinmun said the North rejects the idea on the grounds that the U.S. wants the country to give up its nuclear weapons, regardless of whether talks occur with or without preconditions.

“The question is what the U.S. is aimed at,” the newspaper said, stating that Tillerson’s proposal did nothing to alter the U.S.’s attitude toward North Korea.

The Rodong Sinmun article was in response to comments made by Tillerson on December 12 during an appearance at the Atlantic Council-Korea Foundation Forum in Washington D.C.

“Let’s just meet. And we can talk about the weather if you want. We can talk about whether it’s going to be a square table or a round table if that’s what you’re excited about,” the Secretary of State said.

“But can we at least sit down and see each other face to face. It’s not realistic to say we are only going to talk if you come to the table ready to give up your program.”

Initially, Tillerson’s proposal appeared to represent a softening of the U.S.’s approach to dialogue with North Korea, however the White House insisted that Washington’s position remained the same.

“The President’s views on North Korea have not changed,” White House Press Secretary Sarah Huckabee Sanders said at the time.

U.S. President Donald Trump has stated in the past that dialogue with North Korea “is not the answer.”

Tillerson also appeared to backtrack on his December 12 statements during a meeting of the UN Security Council on December 15.

“As I said earlier this week, a sustained cessation of North Korea’s threatening behavior must occur before talks can begin. North Korea must earn its way back to the table,” he said in his speech to the council.

And the Rodong Sinmun highlighted the conflicting statements between the State Department and White House in its editorial on Tuesday, saying the discrepancy was part of the pressure campaign being waged against the DPRK.

“Saying our nation is to be ‘utterly destroyed’ on the one hand, whilst saying ‘talk without precondition’ on the other hand is the Trump administration’s execution of the maximum pressure and interruption policy aimed at leading the North to the table for denuclearization,” the newspaper said.

The editorial went on to say that North Korea will never negotiate over the country’s nuclear and ballistic missiles unless the U.S. withdraws its anti-North Korea policy and stops threatening the country with nuclear weapons, stating that the solution to problems between the two countries lies in peaceful coexistence.

North Korea's state newspaper said in an editorial Tuesday that the country is not interested in U.S. Secretary of State Rex Tillerson’s suggestion of talks without preconditions.The Rodong Sinmun said the North rejects the idea on the grounds that the U.S. wants the country to give up its nuclear weapons, regardless of whether talks occur with or without preconditions.“The question