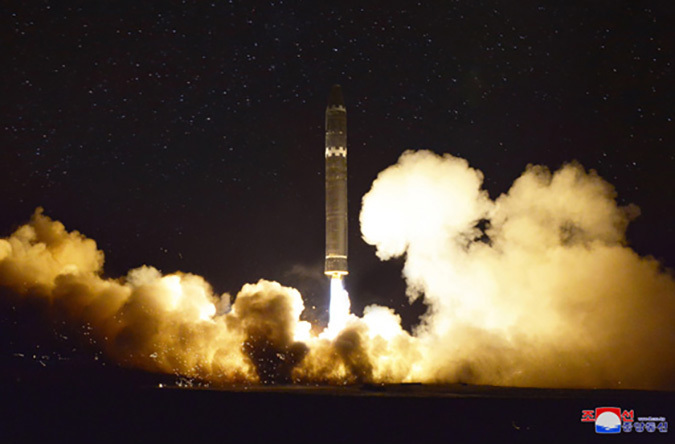 The new images show the successful launch of a large, two-stage ICBM and showcase new engine technology, suggesting North Korea has made rapid progress on its missile development.

“The ICBM has a new engine, but it may be something we have seen before,” Scott LaFoy, an NK Pro analyst and missile and satellite imagery expert said.

“It doesn’t use verniers (for steering) like the Hwasong-12 and -14, but it does appear to have two nozzles, similar to what we saw when Kim Jong Un toured a factory full of KN-08s.”

“However that engine configuration is still very different from this one.”

The images also show a the Hwasong-15 being transported to the launch site, using a truck similar to the those North Korea has used to transport its larger missiles in the past.

“The truck looks like they just extended the WS51200, that’s the same as the Hwasong-14’s one, the Chinese “lumber Truck’,” LaFoy continued.

“They have been modified to include a 9th axle, what KCNA calls a ‘9-axis self-propelled launching vehicle’.”

If the truck used to carry the new ICBM is Chinese-made, it would contrast with recent claims from North Korean state media which said new trucks were manufactured domestically.

LaFoy added the truck was not a transport erector launcher (TEL), but a transporter erector (T/E), a vehicle that moves the missile and lifts it into position. In contrast with the TEL, launch occurs without the truck nearby.

“This means that this vehicle pulls up to a specific piece of infrastructure, erects the missile, detaches from the firing table, and leaves,” he said.

“A T/E takes more time to launch than a TEL. Since the U.S. and ROK are focused on precision, snap responses, this makes a big difference during crises.”

The new ICBM may have a range of up to 13,000km, with North Korea claiming via state media it can the missile can hit “entire region of the U.S. mainland.”

The missile has “much greater advantages in its tactical and technical specifications and technical characteristics,” the DPRK’s Korean Central News Agency (KCNA) reported on Tuesday.

Further images from the test below