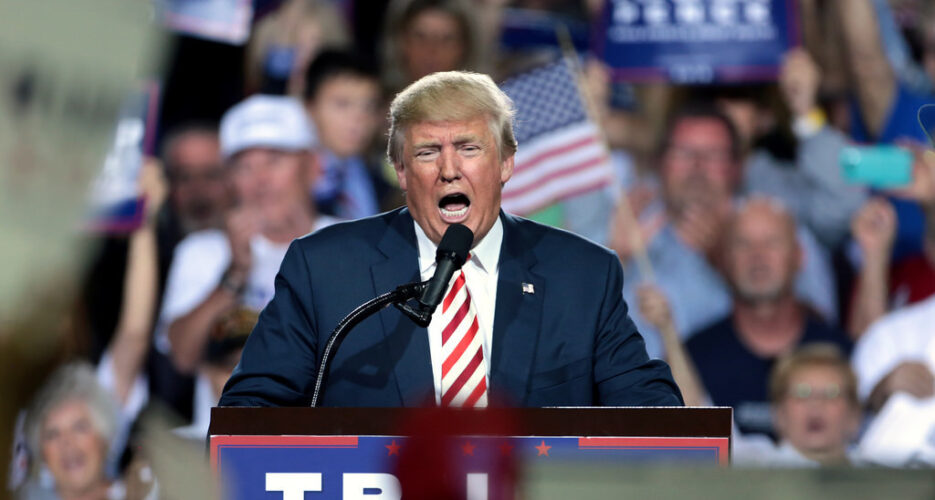 U.S. President Donald Trump announced on social media on Sunday that among possible responses to North Korea’s latest underground nuclear test Washington is considering cutting off trade with any country doing business with the DPRK.

The test, which North Korean state media said was of a successful hydrogen bomb, came after the Korean Central News Agency (KCNA) published images of leader Kim Jong Un inspecting what it claimed was a miniaturized warhead.

“The United States is considering, in addition to other options, stopping all trade with any country doing business with North Korea,” Trump posted on Twitter.

Any such ban would invariably involve China, which is both North Korea’s and the U.S.’s largest single trade partner.

Total trade between the U.S. and China is in the region of USD$570 billion per year, trailing only America’s trade with the entire European Union.

But China is also the biggest buyer of North Korean goods and the country’s main provider of everything from food and energy to machinery and equipment.

Overall Beijing accounts for more than 90 percent of total DPRK trade, with other countries trailing by a significant margin.

While the U.S. President did not define “doing business” on the social media platform, the DPRK also regularly trades with Germany, the U.S.’s fifth largest trade partner, France (the eighth), India (the ninth) and Vietnam (the 16th).

Cutting trade with China would undoubtedly have a sizable economic impact on the U.S., which buys billions in electrical equipment, machinery and raw materials from Asia’s largest economy each year.

But the U.S. President has often talked tough on renegotiating or scrapping agreements with trade partners.

“Trump’s threat to cut off trade with countries doing business with North Korea is simply not credible,” Andrea Berger, a Senior Research Associate at the Middlebury Institute of International Studies, told NK News.

“There are many countries that still have ties to North Korea, including large parts of Asia, the Middle East, and Africa. The U.S. is not going to sever links to all of them because of this issue.”

During his election campaign, Trump said he would hit Chinese imports with high tariffs and label Beijing as a currency manipulator, but despite the threats, he has yet to take action.

But Washington has begun sanctioning foreign entities and individuals for their ties to North Korean activities and trade. This includes Russian and Chinese individuals and businesses, which both countries have denounced.

Trump also used Twitter to announce that he will be meeting with military officials to discuss the latest nuclear test conducted by North Korea at midday Pyongyang time on Sunday.

“I will be meeting General Kelly, General Mattis and other military leaders at the White House to discuss North Korea. Thank you,” Trump’s posting on Twitter read.

Trump has continually said that “all options are on the table” with regard to handling North Korea’s ongoing pursuit of nuclear weapons, which includes possible military responses.

The U.S. President also said North Korea would be met with “fire and fury”, should they continue to threaten the United States. Since taking office, Trump has already used military force in Syria in response to a chemical weapons attack within the country’s borders.

“I believe that his advisers will counsel that any military attack on North Korea will likely lead to a major war, a war that neither the United States nor its allies want,” Bruce Bennett, a senior defense researcher at the Rand Corporation told NK News.

“There is no such thing as a surgical strike against North Korea. North Korea has promised a serious military response against any attack.”

U.S. President Donald Trump announced on social media on Sunday that among possible responses to North Korea's latest underground nuclear test Washington is considering cutting off trade with any country doing business with the DPRK.

The test, which North Korean state media said was of a successful hydrogen bomb, came after the Korean Central News Agency (KCNA) published images of leader Kim Jong Un inspecting what it claimed was a miniaturized warhead.