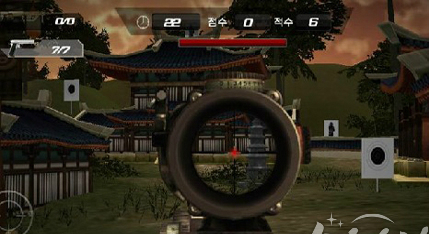 The release of the new title follows a slew of new anti-American and war-focused video games publicized by North Korean state media in recent months.

“The 3D-battle entertaining game program ‘Samurai Hunting’ is a fighting game which [let’s players] sweep the atrocious Samurai jerks …  by aiming them in person with a sniper gun,” the media said.

The North Korean outlet describes Samurai – military nobility of early-modern Japan – as those who “boasted (about) describing themselves as ‘emperors’ of Asia and acted arrogantly, carrying guns and swords in the last century.”

Arirang-Meari said that North Koreans who play the game will strengthen their will to fight against the Japanese.

“Through this war entertainment game, youth and workers are currently bracing up to destroy the nest of the modern version of Samurai gangs who attempts to realize their ambition to re-invade while reviving the specter of militarism,” Arirang-Meari said.

Photos published by Arirang-Meari suggest that players can even purchase in-game items like in other Western first-person shooter (FPS) games like the U.S.-produced “Counter-Strike” (CS) or “Call of Duty” series.

The media also provided details about upgraded functionality compared to other North Korean games such as “Hunting Yankee.”

“Weapons are updated every round and you can utilize various effects when shooting,” Arirang-Meari said, adding the game was so far a hit with players.

Solo Mission is a game in which players can “fight with an enemy solely in the rear and destroy the enemy’s combat and technological equipment.”

“The game is now considered one of the games that users enjoy,” the media said.

The same media reported on August 11 that the North Korean Advanced Technology Research Institute had developed three games: “Confrontation War,” “Guardian,” and “Goguryeo battlefield” – all of which can be played on mobile phones.

“Goguryeo battlefield” is a historical game, which “vividly displays the battlefields” of Ancient Korea.

A North Korean company has rolled out a 3D shooting game called “Samurai Hunting,” the state-run outlet Arirang-Meari reported on Friday. The release of the new title follows a slew of new anti-American and war-focused video games publicized by North Korean state media in recent months. “The 3D-battle entertaining game program ‘Samurai Hunting’ is a fighting game which [let's