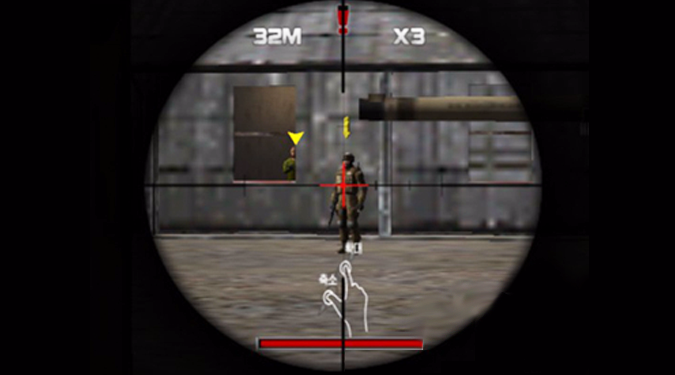 “The 3D-amusement entertainment program ‘Hunting Yankee’ is a fighting game of shooting and knocking down Yankees with a sniper gun… behind enemy lines,” Arirang-Meari reported.

At first glance the game appears to be similar to Western first-person shooter (FPS) games like the U.S.-produced “Counter-Strike” (CS) or “Call of Duty” series.

A photo released by Arirang-Meari showed what appears to be a U.S. soldier being shot and killed by the player, with another photo depicting a soldier in the gun’s crosshairs.

“Users can perform a variety of special actions in a virtual world reminded of a cliff-hanger battle scene,” the article added.

Arirang-Meari reported the game has “become very popular among people in recent times,” but did not name the developer or say whether it can be played on a computer or mobile phone.

Arirang-Meari reported on August 11 that the North Korean Advanced Technology Research Institute had developed three games: “Confrontation war,” “Guardian,” and “Goguryeo battlefield” – all of which can be played on mobile phones.

“Goguryeo battlefield” is a historical game, which “vividly displays the battlefields” of Ancient Korea.

Other types of games have recently also recently appeared in state media.

On August 2 it was reported that a North Korean company had launched a new 3D soccer simulation game, which appears to be similar to the U.S.-produced FIFA and the Japanese-made “Pro Evolution Soccer” series.

The game is called “Soccer Fierce Battle,” and is a “virtual reality (VR)” game.

The Rodong Sinmun, an organ of the ruling Workers’ Party of Korea (WPK), reported on July 2 on the release of the 3D educational and entertainment game “Chosun’s Taekwondo 1.0.”

Arirang-Meari also reported in January that the Intelligent Information Institute under the State Academy of Sciences had produced three other 3D games: “Martial Arts Competition”,“Cheerful Cook,” and “Matching Word.”