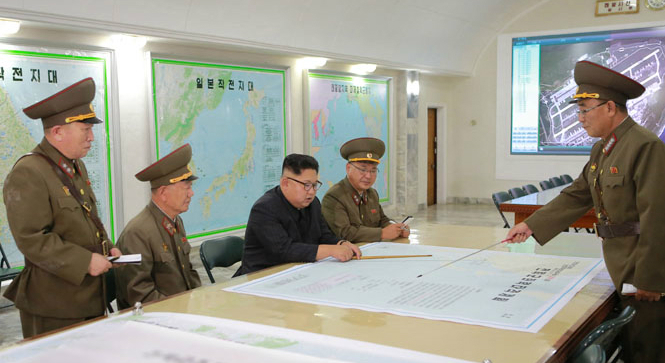 Kim Jong Un was briefed on Monday on the Strategic Force of the Korean People’s Army (KPA)’s plan to attack the U.S. territory of Guam, the state-run Korean Central News Agency (KCNA) reported on Tuesday.

The report comes on Korea’s Liberation Day, which marks the anniversary of the surrender of the Japanese Empire to the Allied powers in 1945.

Kim Jong Un visited the Command of the KPA Strategic Force on Monday and discussed the military operation, saying his armed forces were “always ready” to implement the plan at “anytime.”

“He listened to General Kim Rak Gyom’s decision on the Strategic Force’s plan for an enveloping fire at Guam at the command post,” KCNA reported in an English version.

“He examined the plan for a long time and discussed it with the commanding officers in real earnest.”

Kim said, however, that he would “watch a little more the foolish and stupid conduct of the Yankees spending a hard time of every minute of their miserable lot,” before launching the plan.

The KPA Strategic Force announced last week that the military was “carefully examining the operational plan for making an enveloping fire at the areas around Guam.”

General Kim Rak Gyom, commander of the Strategic Force of KPA, released a statement the same day saying the KPA Strategic Force will “finally complete the plan until mid-August and report it to the commander-in-chief of the DPRK nuclear force and wait for his order.”

Kim Jong Un on Monday “praised the KPA Strategic Force for drawing up a close and careful plan as planned and intended by the Party and examined the firing preparations for power demonstration.”

The DPRK leader threatened to carry out the operational plan against Guam and warned the U.S. that it should “think reasonably and judge properly.”

“He said that if the Yankees persist in their extremely dangerous reckless actions on the Korean peninsula and in its vicinity, testing the self-restraint of the DPRK, the latter will make an important decision as it already declared,” according to the KCNA.

“If the planned fire of power demonstration is carried out as the U.S. is going more reckless, it will be the most delightful historic moment when the Hwasong artillerymen will wring the windpipes of the Yankees and point daggers at their necks,” KCNA reported Kim as saying.

“He said that the U.S. imperialists caught the noose around their necks due to their reckless military confrontation racket,” KCNA added.

The North Korean leader also blamed the U.S. for “driving the situation on the Korean peninsula into the touch-and-go situation” and “running helter-skelter.”

Tensions on the Korean peninsula have been notably high since Tuesday, after U.S. President Donald Trump declared that North Korea would face “fire and fury” if it did not stop threatening the U.S.

Trump doubled down on the rhetoric on Friday, saying that the U.S. military was “locked and loaded” for military action against North Korea and that Kim Jong Un would “regret” any move against the U.S.

While U.S. officials have sought to temper Trump’s more bellicose language, they have also been clear that a military option remains on the table.

Secretary of Defense James Mattis said on Monday that the U.S. would be able to “take out” any DPRK missiles headed towards its territory, and that if any military action was taken by North Korea “it’s game on.”

“It could escalate into war very quickly… yes, that’s called war, if they shoot at us.”

Chairman of the U.S. Joint Chiefs of Staff (JCS), General Joseph Dunford, also said on Monday that the situation on the Korean peninsula should be resolved “without a war,” while stressing that a military option was prepared in case Washington’s economic and diplomatic efforts failed.

Meanwhile, South Korea’s President Moon Jae-in on Monday said he was “confident” that the U.S. will respond “calmly and responsibly” to the ongoing situation on the Korean peninsula.

Kim Jong Un was briefed on Monday on the Strategic Force of the Korean People's Army (KPA)'s plan to attack the U.S. territory of Guam, the state-run Korean Central News Agency (KCNA) reported on Tuesday. The report comes on Korea's Liberation Day, which marks the anniversary of the surrender of the Japanese Empire to the Allied powers in 1945. Kim Jong Un visited the Command of the KPA