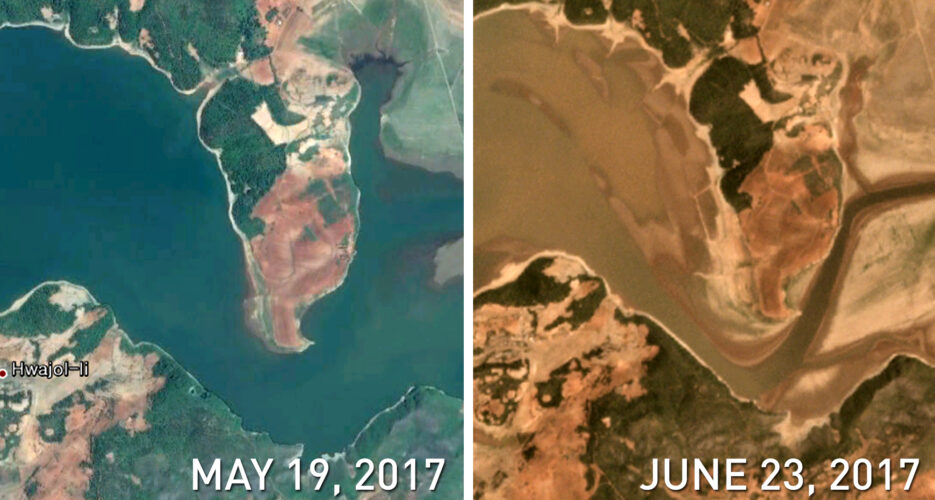 Last Friday the Rodong Sinmun, North Korea’s most widely read newspaper and the main organ of the ruling Korean Workers’ Party, reported that the country had been struck by an “abysmal” drought.

The DPRK, Rodong reported, was engaged in “prevention battles” against the disaster, which had “dried up the water level of reservoirs, rivers, and streams.”

Officials reportedly dispatched “1,300 sprinklers…thousand of small water pumps, around 2,100 portable motor water pumps,” to South Hwanghae Province – the region that has been hit the hardest.

But how widespread is the damage?

Since last Friday, the Rodong Sinmun has posted multiple photos of drought prevention work, but appears to be avoiding showing the full nature of the drought.

“The damage is most severe in South Hwanghae Province and along the farming villages of the West Sea (the Yellow Sea),” said Rodong on Friday. What was once a rich reservoir appears to have dried up considerably.

Even suburban areas of Pyongyang could not avoid the heat. Located only a few kilometers away from the Pyongyang International Airport, this reservoir lost all of its water in less than two months.

Another reservoir, located west of the Pyongyang International Airport, also appears to have completely dried up.

Farmlands surrounding the northern airstrip of the Pyongyang International Airport are now arid.

Gyodong Island in South Korea is only about 2.4 kilometers from the North. While in the same region and equally affected by the hot weather, the island has remained green due to better irrigation facilities.

“After 2016, North Korea engaged in the modernization of its irrigation facilities,” Na Sang-il, a researcher from South Korea’s Rural Development Administration, told NK News. “It is still in its early phase, and the improvement will likely not bring about meaningful change in the short term.”

Baengnyeong Island and Daecheong Island, South Korea on the left. The South’s irrigation systems and crisis management skills are much more advanced than those of North Korea, Na said, and it shows in this snapshot.

A reservoir near Taetan County, South Hwanghae Province, which appears to have halved in size since last year.

This entire region near Taetan appeared covered in green in an image taken about two months ago. The lake’s right bottom side, once dark and blue, now looks shallow and muddy.

The depleting water levels of the Pogu Reservoir, located southwest of Sariwon, DPRK.

Kwail County, meaning “Fruit County” in Korean, is known as one of North Korea’s best fruit-producing areas, but it now appears to have turned arid due to low rainfall.

The eastern side of Ongjin County, South Hwanghae Province.

Overview of the southern side of Changyon County, South Hwanghae Province.

All photos credit to Planet Labs and Google Earth

Last Friday the Rodong Sinmun, North Korea's most widely read newspaper and the main organ of the ruling Korean Workers' Party, reported that the country had been struck by an “abysmal” drought.

The DPRK, Rodong reported, was engaged in “prevention battles” against the disaster, which had "dried up the water level of reservoirs, rivers, and streams." 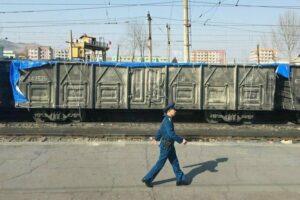