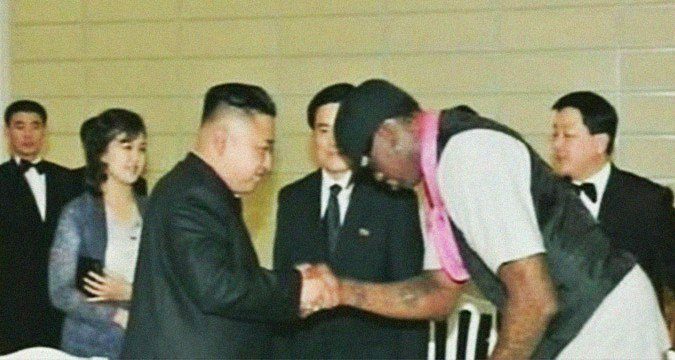 Dennis Rodman is currently in Beijing and will take Tuesday’s 13.00 Air Koryo flight to Pyongyang, a source confirmed to NK News, though no details about the purpose of his trip have yet been revealed.

The news, which was originally broken by U.S. network CNN after he was spotted at Beijing airport, means the basketballer will be making what is, at least, his fifth trip to the DPRK.

When spotted at Beijing airport, CNN said that Rodman declined to comment to its journalist, but that “a member of his entourage mouthed the words ‘See you Thursday.'”

It is not clear whether Rodman will be meeting with North Korean leader Kim Jong Un during the trip, who he met on a number of previous visits conducted between 2013-2014.

One observer who was also involved with some of Rodman’s visits with the Paddy Power betting agency in 2013 shared further context about the trip.

“I do know that the DPRK foreign ministry has wanted to reduce tensions with the U.S., and that Dennis Rodman has had a long standing invitation to return,” said Daniel Pinkston, a lecturer at Troy University.

“I also know that Dennis is sensitive and aware of the timing and conditions of a visit,” he said.

Notably, Rodman is personally connected to President Donald J. Trump, with the pair having appeared together on the Celebrity Apprentice TV show in 2013.

And in April 2013 Trump called Rodman “smart” for his trip to North Korea.

“It’s not an act. But he’s a much different guy and this year on the Apprentice — it’s amazing how sharp and smart. Dennis is not a stupid guy. He’s smart in many ways; he’s very street-wise,” Trump said in comments republished by Politico at the time.

Rodman’s latest trip comes also less than four months after he appeared at the prestigious West Point military academy in the U.S. to talk about his personal interactions with the North Korean leader.

“I know Dennis would do anything for President Trump, he knows him personally so we would go back in a second if it meant helping everyone in uniform, helping our president, helping our nation,” Chris Volo, Rodman’s minder, said at the Westpoint event.

Rodman reiterated this sentiment during the event as well, recounting a personal conversation with the President.

“I was telling Trump – I see Trump and I was in his office – I said Trump I’m going to North Korea and he said  ‘I wanna go’, that was the first thing he said: ‘I wanna go’,” Rodman told the West Point crowd.

“Alright Mr. President of the United States, you can go now!” Rodman said.

But Trump later said he had never told Rodman he wanted to visit the North.

“Dennis Rodman was either drunk or on drugs (delusional) when he said I wanted to go to North Korea with him,” he tweeted in 2014.

Rodman also said that Kim Jong Un had expressed a desire to visit the U.S. and watch a New York Knicks game.

The moderator followed up with a question, asking Rodman whether or not he would return in an official capacity if Trump asked him to.

“I’d be there in a heartbeat,” he answered.

Looking back, Rodman admitted at the talk that he first went to the country “blind, green behind the ears and all that”. For him, he said, it was all about sports and not about politics.

And at that initial meeting Rodman said he could bring a basketball team over to play in front of the North Korean people. Kim agreed on the spot, Rodman said, and the trip resulted in the Harlem Globetrotters making a trip to Pyongyang.

“You are the only American that has ever kept his word and I thank you,” Kim said to Rodman according to his West Point account.

“And I think Kenneth Bae was on a boat that day but something happened so I think that was an agreement right there that he was going to release Kenneth Bae on the boat to me and bring him back to America,” he recalled.

Chris Volo said that upon their return from the trip, the entourage wrote a letter asking for Bae’s release, which happened a few months later.

Pinkston, who worked with Rodman on previous trips, said: “In general, I think Dennis is generous and kind-hearted, and he only means well. Unfortunately, I think a lot of people miss that because they get distracted by his flamboyant personality.”

Dennis Rodman is currently in Beijing and will take Tuesday's 13.00 Air Koryo flight to Pyongyang, a source confirmed to NK News, though no details about the purpose of his trip have yet been revealed.

The news, which was originally broken by U.S. network CNN after he was spotted at Beijing airport, means the basketballer will be making what is, at least, his fifth trip to the DPRK.