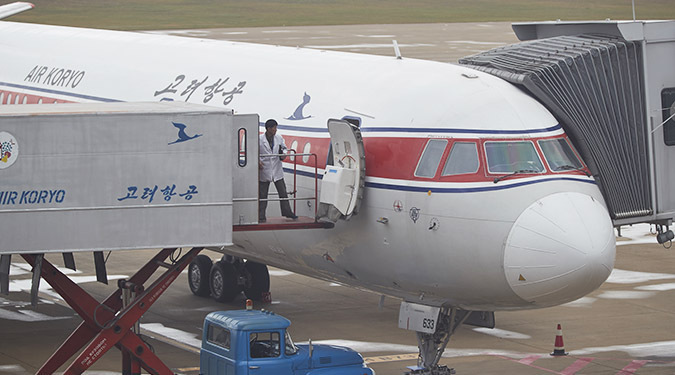 A North Korean Air Koryo airliner was forced to make an emergency landing in Pyongyang in May after a flap on the plane’s wing fell off mid-air, multiple sources confirmed to NK News on Tuesday.

The incident, which took place on Thursday May 25 onboard a flight from Pyongyang to Beijing, happened after the aircraft crossed into Chinese airspace, one source familiar with the incident told NK News.

“The whole plane started vibrating and people noticed the flap coming loose,” the source said on condition of anonymity.

“I heard it fell off in the end (and then) they returned to Pyongyang one hour later on another plane,” the source continued. “Some people were pretty shaken.”

Another informed source confirmed on Tuesday that “shortly after flight the plane got very shaky, and so they had to come back for a return to Pyongyang.”

“Then they landed and everything was okay, and they were put on another aircraft to go back to Beijing.”

A third source confirmed knowledge of the incident and said that the plane “lost its landing flap.”

Air Koryo’s official timetable for May 25 shows that a Tupolev 204-300 aircraft (tail number P632) was scheduled to leave Pyongyang at 10.05am that morning to arrive at 11.35am Beijing time.

That plane, delivered to the North in 2007, is the same one that experienced an engine fire and forced landing in Shenyang in July last year, an incident one passenger said caused him to think he was “going to die.”

Yet flight tracker data at Flight Radar 24 for May 25 shows that a 2010-delivered Tupolev 204-100 (tail number P633) arrived at Beijing instead that day, just over 90 minutes later than the flight is usually scheduled to arrive.

Such a delay could be enough to accommodate a rapid plane change in Pyongyang after the older Tu-204-300 returned to its base, and tracking data shows that aircraft appears not to have been used on international flights since May 23.

Air Koryo informed passengers aboard the shaking plane that the return to Pyongyang was being caused due to “bad weather in Beijing,” the first source said, and did not acknowledgment the incident.

The airliner’s offices in Pyongyang did not respond to phone calls on Tuesday, potentially because of a national holiday in North Korea.

A representative at its Shanghai office denied knowledge of an incident when contacted by NK News, saying that had one taken place, it “would have been in the news.”

Air Koryo has a spotty safety record and is sanctioned unilaterally by the United States and South Korea.

A May 16 update to the European Union’s list of air carriers banned from operating within EU airspace included Air Koryo for the seventh consecutive year.

The list bans all Air Koryo planes, with the exception of the airline’s two Tupolevs, from its airspace, meaning the Tu204-300 involved in two reported incidents would still be able to fly to the EU.

Earlier in May, North Korea’s Pyongyang – Dandong service was abruptly shut down just over a month following the route’s inauguration.

A North Korean Air Koryo airliner was forced to make an emergency landing in Pyongyang in May after a flap on the plane's wing fell off mid-air, multiple sources confirmed to NK News on Tuesday.The incident, which took place on Thursday May 25 onboard a flight from Pyongyang to Beijing, happened after the aircraft crossed into Chinese airspace, one source familiar with the incident told