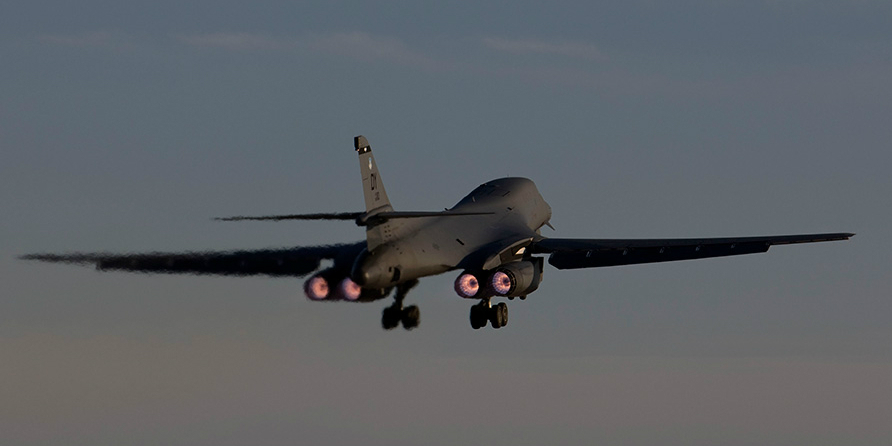 “On May 1, the U.S. imperialists committed one more military provocation of conducting a nuclear bomb dropping drill against the major objects of the DPRK in the sky over South Korea,” KCNA said in an English dispatch.

The North said “such military provocation” is happening as President Trump and “other U.S. warmongers are crying out for making a preemptive nuclear strike” against the DPRK.

Despite the North Korean statement, the B-1B strategic bombers were converted to only deliver conventional weapons in 2011 under the New Strategic Arms Reduction Treaty (START).

Supersonic B-1B Lancers are able to “carry the largest conventional payload of both guided and unguided weapons” and “can rapidly deliver massive quantities of precision and non-precision weapons,” according to the U.S. Air Force.

Dr. Daniel Pinkston, a professor at Troy University, said that flying B-1s, instead of the B-52 Stratofortress, was an “appropriate response” to the North’s large-scale joint live-fire exercise on April 25.

The B-52 Stratofortress and B-2 Spirit can still carry out nuclear-related missions.

“Everyone expected North Korea to conduct a nuclear test or ICBM (intercontinental ballistic missile) test over the last month,” Pinkston told NK News. “However, they signaled the KPA’s ability to respond conventionally to any contingency before escalating to nuclear use.”

“By flying the B-1s, United States Pacific Command (USPACOM), Combined Forces Command (CFC), and USFK signaled that there is a robust conventional response that is available to the allies as well.”

A few hours after the KCNA report, the South Korean military and USFK announces that two U.S. Air Force B-1B Lancers had been deployed over the Korean Peninsula and had conducted joint military drills with the Republic of Korea Air Force (ROKAF) on Monday.

The military operation came a day after the end of the annual U.S.-South Korea Foal Eagle joint military exercise, and comes amid growing tension on the Peninsula.

President Trump, in an interview with CBS on Sunday, would not rule out military action against North Korea were the country to continue its missile and nuclear tests.

On Monday North Korea said it would speed up “measures for bolstering its nuclear deterrence” in response to the Trump’s administration’s “maximum pressure,” quoting a statement from a spokesman for the Foreign Ministry of the DPRK.

The spokesperson said the Korean Peninsula had so far avoided crisis “due to the North’s strong deterrence” but added that “black clouds of war haven’t completely gone.”