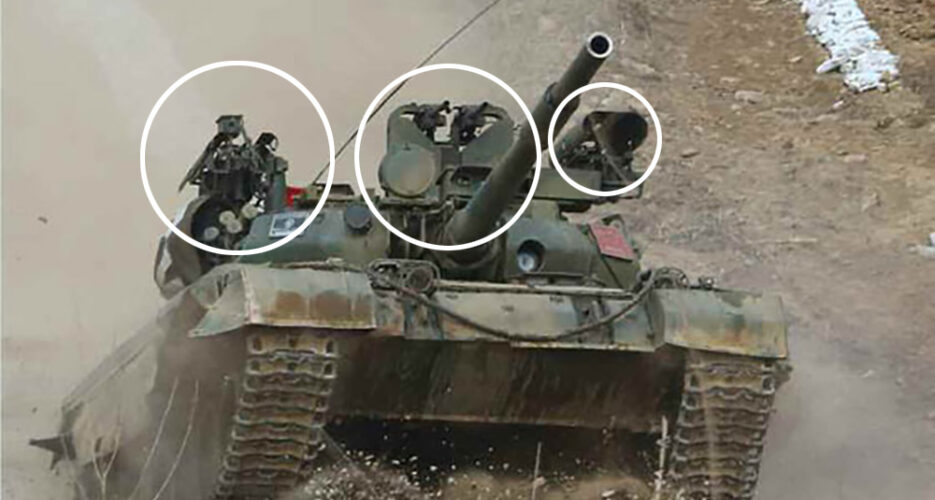 The modifications are most likely aimed at enhancing its counter ROK-U.S. capabilities, but it remains to be seen if these new designs could actually help overcome the KPA’s long-term weaknesses against the alliance, experts said, or whether they are simply for show.

“It looks like they are trying to enhance the tank’s anti-aircraft and anti-tank capabilities with these modifications,” Kim Min-seok, a senior researcher at the Korea Defense and Security Forum, told NK News.

Pointing at three parts of an image (see above) released on April 1 by ruling party mouthpiece Rodong Sinmun, Kim said he had not seen this degree of modification by North Korea in the past.

“The one in the left circle is an anti-air missile system called SA-16 Gimlet, more commonly known as Hwaseong-Chong (a matchlock gun) by North Korea,” Kim continued.

“The one in the middle is a twin-barreled machinegun that I have not seen before, and the one on the right is the anti-tank missile called Bulsae (firebird).”

During the observation, Kim Jong Un observed the “invincible iron horses” with a smile, the original article released on KCNA said.

No mention of the new modifications appeared in the articles, and despite Kim Jong Un’s praise of the tank units, the two experts cast doubt on whether the tanks – even after the experimental modifications – would be a match for the ROK and U.S. forces.

“That attachment, the AT-4 anti-tank missile, known as Bulsae in North Korea, has a range of around four kilometers,” Choi Hyun-ho, director of Milidom.net, a South Korean military-focused website, told NK News.

“North Korea recently upgraded their AT-4 anti-tank missile to a laser-guided system; it is possible that they could have combined that system with these tanks.”

DPRK tanks armed with this system would be able to engage armored enemy units far beyond their previous reach, but only theoretically, Choi said.

“The weapon fire control system of the current North Korean tanks is falling behind the technology, so to secure enough range for that system, they would have to fire the missile only in vast open terrain.”

The AT-4 anti-tank missile systems are also archaic, Choi added, not posing much of a threat to the ROK-U.S. forces unless fired in massive quantities.

Kim said the North Korean modifications are most likely intended for “showing off” and would have little practical application in the event of war.

“Only North Korea would make such a modification,” Kim said, saying that the DPRK tanks are more than three decades behind the ROK-U.S. forces.

This unusual modification would be incapable of penetrating South Korean tanks, Kim said.

“The DPRK’s tank guns are not advanced enough to penetrate the ROK tanks.”

South Korea tanks are armed with counter-missile systems, and projectiles fired from AT-4 systems would be far too slow, taking five to ten seconds before reaching the target, he added.

“The tanks’ anti-air capability is also questionable; the gunner will have to operate the system outside of the tank, leaving him vulnerable to the attack.”

Pictures of North Korean tanks released during a recent training exercise show that the Korean Peoples' Army (KPA) has fitted them with some experimental modifications, long-time DPRK military observers told NK News on Monday.The modifications are most likely aimed at enhancing its counter ROK-U.S. capabilities, but it remains to be seen if these new designs could actually help overcome the