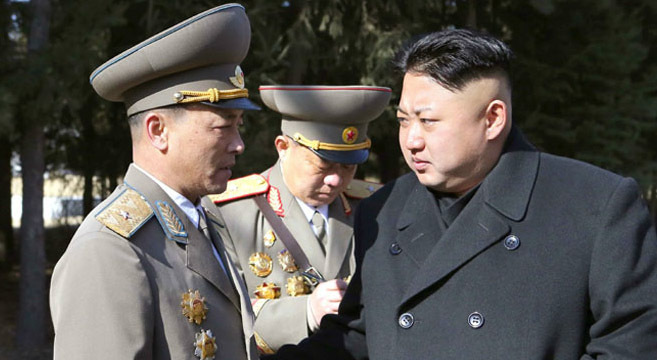 President Donald Trump again praised Kim Jong Un for his rise to power on Sunday, describing him as a “pretty smart cookie” who had taken power from “some very tough people.”

In comments made to CBS’s Face the Nation on Sunday evening, Trump said he had “no idea” whether Kim Jong Un was sane, and said he was “not going to be very happy” if North Korea continued missile and nuclear tests. When asked if that meant military action was on the table, he replied: “we’ll see.”

“He was a young man of 26 or 27… when his father died,” he said. “He’s dealing with obviously very tough people, in particular the generals and others.”

“And at a very young age, he was able to assume power. A lot of people, I’m sure, tried to take that power away, whether it was his uncle or anybody else. And he was able to do it.”

North Korea attempted another missile launch on Saturday, but reports indicated that the test failed, with a U.S. Pacific Command’s (PACOM) press release saying “the missile did not leave North Korean territory.”

The test, which took place on Donald Trump’s 100th day in office, was the third by North Korea this month. The DPRK attempted to launch a missile two weeks ago, following a national holiday known as the Day of the Sun, but failed.

Earlier in the month, North Korea successfully launched an unidentified projectile into the Sea of Japan from Sinpo, one of its key submarine bases.

Trump declined to comment on why North Korea’s missile tests kept failing, saying “I’d rather not discuss it.”

“We shouldn’t be announcing all our moves,” he said. “It is a chess game. I just don’t want people to know what my thinking is.”

Sunday’s interview saw the President echo comments he’s made in the past: in a Thursday interview with Reuters he said Kim Jong Un’s rise to power had been “a very hard thing” while stipulating that “I’m not giving him credit”.

While on the campaign trail in January last year, he said “gotta give him credit” for taking power at a young age – comments that proved controversial.

Trump’s interview with Reuters on Thursday also saw the President apparently reverse a year-long U.S. policy towards South Korea, when he argued that South Korea would pay the estimated $1 billion cost of the deployment of the Terminal High-Altitude Area Defense (THAAD) missile defense system’s deployment in the South – costs the U.S. has long said it would cover.

“I informed South Korea it would be appropriate if they paid. It’s a billion dollar system,” Trump said. “It’s phenomenal, shoots missiles right out of the sky.”

But South Korean officials were quick to insist that the U.S. would pay for the controversial missile defense system, of which key components were deployed in the South last week.

South Korea’s Blue House now says it has received assurances from the Trump administration that the U.S. will shoulder the costs.

“National security adviser H.R. McMaster explained that the recent statements by President Trump were made in a general context, in line with the U.S. public expectations on defense cost burden-sharing with allies,” the Blue House said in a statement.

President Donald Trump again praised Kim Jong Un for his rise to power on Sunday, describing him as a "pretty smart cookie" who had taken power from "some very tough people."In comments made to CBS's Face the Nation on Sunday evening, Trump said he had "no idea" whether Kim Jong Un was sane, and said he was "not going to be very happy" if North Korea continued missile and nuclear tests. When