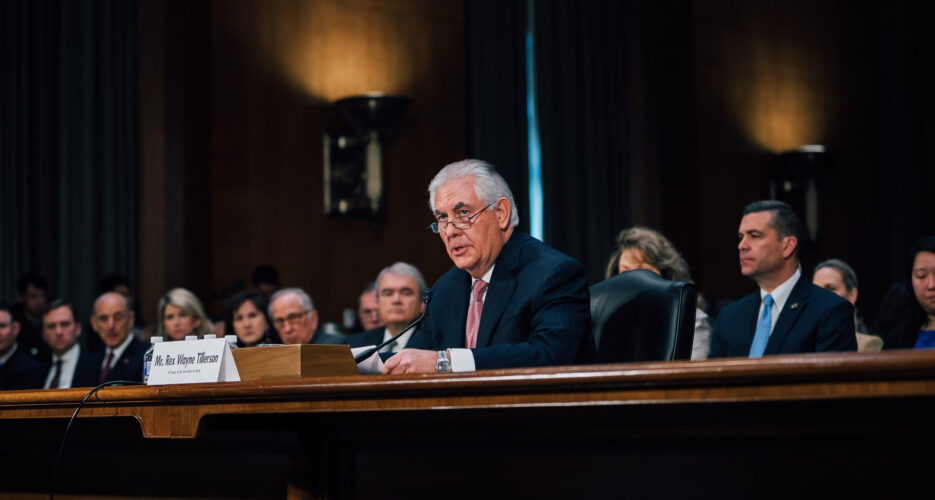 Rex Tillerson on Wednesday denounced China’s “empty promises” on North Korea and said he would consider action to “compel” China to comply with the United Nations sanctions in case of violations.

Tillerson, U.S. President-elect Donald Trump’s nominee for Secretary of State, pointed to North Korea as an adversary which posed “grave threats to the world because of their refusal to conform to international norms.”

Speaking at a nine-hour confirmation hearing at the U.S. Senate Foreign Affairs Committee, Tillerson attacked China’s attitude toward the DPRK and said the U.S. wouldn’t ignore “violation of international accords”.

“We cannot continue to accept empty promises like the ones China has made to pressure North Korea to reform, only to shy away from enforcement,” Tillerson, former chairman and former chief executive officer (CEO) of Exxon Mobile, told committee members in an opening statement.

“Looking the other way when trust is broken only encourages more bad behavior. And it must end.”

The U.S. Secretary of State nominee said China “hasn’t been a reliable partner in using its full influence to curb North Korea.”

When asked by Senator Cory Gardner whether he would be “willing to exert additional pressure on North Korea through China,” including enforcement of UN Security Council resolutions, Tillerson suggested China should enhance its role in North Korean issues.

“I think we have to be clear-eyed as to how far China will go and not get overly optimistic,” Tillerson said. “That’s why ultimately it’s going to require a new approach to China in order for China to understand our expectations of them, going beyond certainly what they have in the past, which has fallen short.”

With respect to the possibility of imposing secondary sanctions, Tillerson also pointed out that “90 percent” of the North’s trade was with China and that it was “solely dependent on Chinese trade.”

“To the extent there are specific violations of the sanctions, such as the purchase of coal, which is specifically mentioned in the UN sanctions most recently, if there are gaps of enforcement, they have to be enforced,” Tillerson said.

“If China is not going to comply with those UN sanctions, then it’s appropriate for the United States to consider actions to compel them to comply.”

The nominee reiterated that the U.S. should “hold China accountable to comporting with the sanctions.”

“They really do have complete control over what sustains the government of North Korea. A big part of that is the sale of anthracite coal across the border and sanctions did speak to that sale,” he said.

Tillerson called for “closing gaps” caused by insufficient enforcement of the UN sanctions as a way to lead multilateral efforts to peacefully disarm Pyongyang, describing it as “a long-term plan.”

“…There are gaps in those sanctions today that are undermining their effectiveness. It is a question of closing those gaps where it’s appropriate to seek further steps against those who are not fully complying with those sanctions.”

The Secretary of State nominee reinstated that the U.S. would “put additional pressure” on the North so as to prevent it from continuing to “advance not just their development but the delivery systems, which is where the greatest threat exists today.”

Meanwhile, Tillerson refuted Trump’s claim that Japan, South Korea, and Saudi Arabia might need to develop their own nuclear weapons in the future, saying “I do not agree.”

“I don’t think anyone advocates for more nuclear weapons on the planet.”

Rex Tillerson on Wednesday denounced China’s “empty promises” on North Korea and said he would consider action to “compel” China to comply with the United Nations sanctions in case of violations.

Tillerson, U.S. President-elect Donald Trump's nominee for Secretary of State, pointed to North Korea as an adversary which posed “grave threats to the world because of their refusal to conform to international norms.”