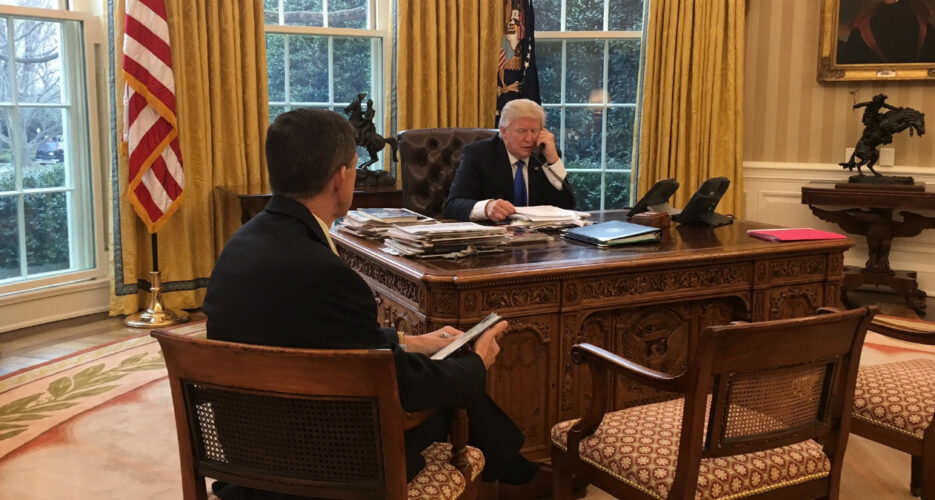 During the Monday morning call, Trump said “the U.S. will always be with South Korea, 100%” and that Washington’s alliance with Seoul is “better than ever before”, Hwang’s office said in a written statement.

Trump said he expected the two countries would have “close discussions to strengthen the combined defense capabilities of the bilateral alliance” and find ways to “cooperate on the North Korean nuclear program, ” during U.S. Secretary of Defense James Mattis’s visit to Seoul this week, the Prime Minister’s office said.

Trump’s remarks and reported support for the alliance are notable due to statements made during the campaign trail in which he questioned the value of providing sustained U.S. military support to South Korea.

But discussion of difficult issues such as defense cost-sharing and controversial free trade agreements between the U.S. and South Korea did not come up in the call, the Prime Minister’s office added, describing their omission as part of a desire to “start and develop the U.S – South Korea relations ‘in a friendly way’.”

For its part, the White House’s report of the call echoed Seoul’s, saying the thirty-minute conversation contained a pledge by both countries to “advance mutual security and prosperity” with an emphasis on “the importance of the U.S.-ROK alliance.”

“Trump reiterated our ironclad commitment to defend the ROK, including through the provision of extended deterrence, using the full range of military capabilities,” the White House said in its own written statement of the call.

“The two leaders agreed to take steps to strengthen joint defense capabilities to defend against the North Korean threat.”

Hwang also told Trump that the two countries could “change North Korea’s method of calculation by taking firm measures” in close cooperation with the international community. He said the U.S. and South should take “strong measures based on bilateral cooperation” if the North continues to make “provocations”.

“President Trump expressed sympathy [with Hwang’s request] and reaffirmed (his) firm commitment to defend the Republic of Korea by saying the U.S will be with South Korea 100% even on the North Korean issues,” the South Prime Minister’s office said.

“[Both] will continue to be in close consultation with relevant authorities, including cabinet members of both countries, over strategies to confront North Korea’s nuclear program and missiles,” the Prime Minister’s office added, quoting Trump as saying.

Trump also “strongly agreed with” South Korea’s stance on the deployment of the U.S. Terminal High Altitude Area Defense (THAAD) system and said both should “work closely together”, using the forthcoming visit of the U.S. Secretary of Defense as an opportunity to reaffirm ties.

The U.S. Pentagon announced last Wednesday that Mattis would “embark on his first trip as Secretary of Defense” to meet counterparts from “two critical U.S. allies, Japan and the Republic of Korea (ROK).”

The bilateral talks between the U.S. and the South will represent the first meeting between the defense chiefs and the “first overseas trip” since Mattis entered the Pentagon, the MND said.

“This reflects the importance of the Korean peninsula and the Asia-Pacific region within the assessment of the new U.S. administration,” the South’s MND added in a written statement.

Trump and Japanese Prime Minister Shinzo Abe also agreed on Saturday to meet early next month to “consult and cooperate on the threat posed by North Korea,” the White House added.

Trump also had a telephone conversation with Russian President Vladimir Putin and had a “detailed discussion” about the Korean issue, strategic stability, non-proliferation, and Iran’s nuclear status, the Kremlin said on Saturday.

On November 10, the-now-disgraced South Korean President Park Geun-hye and Trump had a 10-minute phone call right after Trump was elected as President of the U.S.

“We are going to be with you 100%,” South Korean presidential office reported quoting Trump as saying. “We will be steadfast and strong with respect to working with you to protect against the instability in North Korea.”

During the Monday morning call, Trump said “the U.S. will always be with South Korea, 100%” and that Washington's alliance with Seoul is “better than ever before”, Hwang's office said in a written statement.