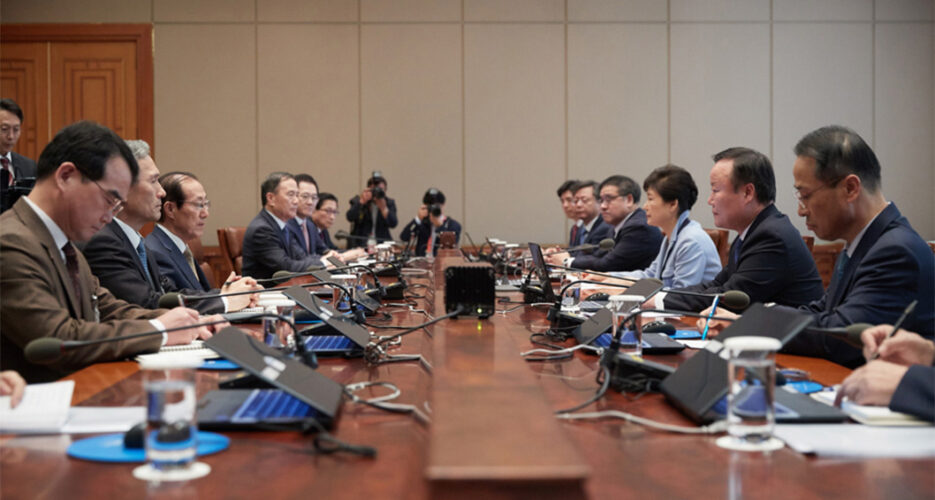 South Korea announced on Friday it would unilaterally impose extended sanctions against North Korean entities and individuals relevant to its weapons programs, while also banning all vessels from its waters that entered North Korean ports during the past twelve months.

The new round of sanctions includes measures against 36 individuals and 35 entities which are suspected to play a pivotal role in “developing weapons of mass destruction (WMD) and securing major funds of the North Korean regime.”

The South previously imposed sanctions against 40 individuals and 30 entities on March 8, in the wake of Pyongyang’s fourth nuclear test on January 6.

The new set of sanctions includes the blacklisting of key North Korean figures including Hwang Pyong So, Choe Ryong Hae, Kim Won Hong and Kim Ki Nam, as well as principal organizations such as the Workers’ Party of Korea (WPK) and the State Affairs Commission and the Central Military Commission of the WPK.

Hwang Pyong So, Director of the General Political Bureau of the Korean People’s Army (KPA) and Choe Ryong Hae, Vice-chairman of the Central Committee of the WPK, are known to be Kim Jong Un’s top aides, both having notably visited Seoul in October 2014 with the late Kim Yang Gon for talks with the South.

The sanctions also target Air Koryo, North Korea’s state airline, which has previously been used to fly officials for talks in the South. Seoul justified the measure by saying the airline was involved in transporting North Korean workers, cash, and “embargoed supplies.”

“I am repeating once again individuals and entities targeted by the sanctions are prohibited from making a foreign exchange and financial transactions with our people and are subject to asset freezes in the country,” said Minister of South Korea’s Office for Government Policy Coordination, Lee Suk-joon, at a news conference.

In a move to further block the North’s inflows of funds, Seoul said it would also seek to tighten its control of imports and exports possibly linkage to the North’s weapons programs, though without specifying how.

South Korean companies would also be under tougher surveillance as the government considers the North’s second largest source of foreign exchange as coming from the field of textile manufacturing, which possibly has a linkage to the North’s weapons program.

The South also said it plans to share a submarine-focused “watch-list” with the international community, though without providing specifics about the plan.

And in an attempt to prevent North Korean items and products entering the South via third countries, 11 types of North Korean “minerals” were designated to become an area of intense monitoring. March’s previous measures only contained 22 agricultural and marine products.

“We’ve decided to entirely disapprove foreign vessel which called at North Korean ports in the past year to enter the country’s ports,” Lee told reporters, noting the government doubled the previous prohibition period.

According to the South’s unilateral sanctions on March 8, vessels which have visited North Korea in the last 180 days would not be allowed to enter South Korean ports.

Under the fresh legislation, the South said it would also strengthen immigration restrictions related to the North.

“[The South Korean government] will ban third country nationals designated as the target of our sanctions,” Lee said.

Re-entry of foreign missile experts staying in the South – including those working for local universities – will be prohibited if they are judged to visit the North and do something can damage the national interest.

South Korea announced on Friday it would unilaterally impose extended sanctions against North Korean entities and individuals relevant to its weapons programs, while also banning all vessels from its waters that entered North Korean ports during the past twelve months.