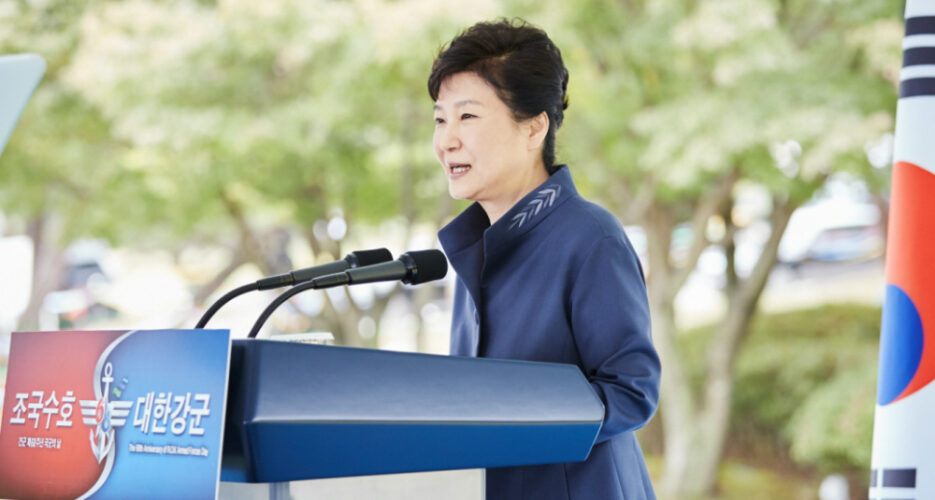 “It’s ridiculous and foolish that Park Geun-hye flutters her feet to smear our dignified leader’s reputation with infamy by persisting hallucinations in her head as an established fact and mentioning a reign of terror as well as starvation and repression,” Rodong reported on Monday.

“Park Geun-hye has the gall to ignore the reality within her grasp and to doggishly and overtly utter ravings as saying the land of freedom and encouraging defection,” the article continued. “There is no such a barefaced and impudent bitch elsewhere.”

South Korean President Park Geun-Hye on Saturday expressed concern over human rights abuses and the “horrendous reality” of life in the DPRK during a speech commemorating the 68th Armed Forces Day.

Park appealed to North Korean people and soldiers to flee to the South.

“We (Republic of Korea) will put our all-out efforts into ensuring all of you to pursue happiness in life, and your human dignity will be respected,” Park added. “We will open the path for North Korean citizens to find their hope and life. Come to the Republic of Korea – a land of the freedom –at any time.”

South Korea’s media outlets, including Yonhap News Agency  and JoongAng Ilbo, reported it was the first time President Park had encouraged North Koreans to defect to the South in such a direct way.

“I look forward to your participation in ushering in a new era of a unified Korean Peninsula, free from the terror of nuclear weapons and war, and where human dignity is respected,” Park said during Independence Day speech in mid-August.

But neither South Korea’s Ministry of Foreign Affairs (MOFA) or Ministry of Unification (MoU), when contacted by NK News for comment on Monday, were able to suggest concrete measures to back up Park’s stated intention to receive such a large number of defectors.

Park Jie-won, who heads the minority People’s Party, on Sunday cast doubts on whether President Park’s speech was the appropriate move, arguing that she should consider the North as a partner for unification.

“I couldn’t sleep at all…The chief of state should have used diplomatic rhetorics,” Park Jie-won said on Facebook. “Is it appropriate to deliver the direct and offensive speech? I believe this is not an oppression on Chairman Kim Jong Un but a proclamation of war in the end given that she directly mentioned the collapsed of the North and a defection.”

“President Park seems to be on the warpath. However, the contradiction on the Korean peninsula can’t be resolved in this way,” Yonhap reported quoting, Ki Dong-min, a party spokesperson, as saying.

According to the MoU, there are 894 (provisional) defectors from January to August this year – an increase of 15 percent from last year.

In 2016, North Korean Minister-level diplomat, Thae Yong-ho, defected from the North’s embassy in London, and 13 North Korean workers at an overseas restaurant in China reportedly fled to Seoul.

South Korea’s Joint Chiefs of Staff (JCS) announced on Thursday that a North Korean soldier defected to the South across the heavily fortified military border.