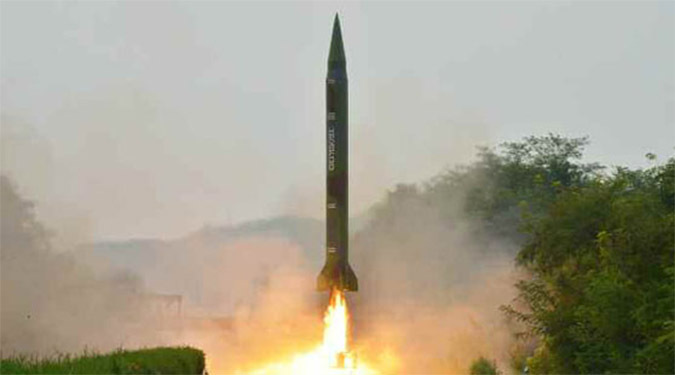 As is customary, state media didn’t specify the date the missiles were launched, though the reports likely refer to North Korea’s Monday launch of three ballistic missiles into the Sea of Japan (known in Korea as the East Sea).

Pictures issued by state-run newspaper the Rodong Sinmun show that at least two of the missiles appear to have been fired at the same time.

“It looks like the Shahab-3, but we have never seen the Rodong on a 4 axle TEL before,” said Scott LaFoy, an NK Pro missile analyst. TEL is a Transporter Erector Launcher, which is the vehicle that carries, sets up, and launches the missile. 4 axle TEL means vehicle features 8 wheels.

The Shahab-3 is an Iranian medium-range ballistic missile based on the design of North Korea’s Rodong-type, which can travel up to just under 2,000km. It is the most sophisticated evolution of the Shahab-series of missiles.

Tal Inbar, a long-time missile analyst at the Fisher Institute in Israel, agreed there appeared to be a likeness in the missiles pictured and the “Iranian model…the Shahab-3,” something that “proves close ties between Iran and the North”.

But South Korea’s Joint Chief of Staff (JCS) said the North Korean missiles launched yesterday were the Rodong type. “We judge that based upon (the) debris and the trajectory of the flight,” Jeon Ha-gyu, South Korea’s JCS Chief of Public Affairs said during a regular news briefing on Tuesday.

“The Rodong missile has various types of warhead,” Jeon continued, responding to suggestions the missile may have been a Scud-type.

KCNA said Kim Jong Un expressed satisfaction with “the successful successive firing drill,” likely a reference to the three individual launches taking place on Monday, something which underscored the significance of nuclear armament at a time “when the North succeeded in the H-bomb test.”

The state media outlet reported remarks from Kim which also suggested the possibility for ongoing ballistic missile tests throughout the year, in line with what analysts view as a major push from Pyongyang to develop a credible nuclear deterrent as rapidly as possible.

The purpose of the latest missile drill was “to reexamine the reliability such as the flight security and guided accuracy of the improved ballistic rockets deployed for action,” the KCNA report reads.

The test-firing was conducted by the “Hwasong artillery units of the KPA Strategic Force”, which was described as being tasked with striking “the bases of the U.S. imperialist aggressor forces in the Pacific operational theatre in a contingency.”

U.S. bases within the Pacific theater include locations in Japan, South Korea, Guam and Hawaii.

Monday’s barrage of missile launches was notable, coming only a few hours after South Korea’s President Park Geun-hye and Chinese President Xi Jinping wrapped up a bilateral meeting on the sidelines of the G20 summit in Hangzhou, China.

“North Korea again engaged in a provocation in the midst of the G20 Summit, where the leaders of the participating countries were expressing a deep concern over North Korea’s nuclear and missile threats,” an unnamed foreign ministry spokesperson said on Monday in a statement.

“There is nothing that North Korea can gain from such a provocation,” the spokesperson added.

North Korea is banned by various UN sanctions from conducting ballistic missile tests, due to it defying multiple Security Council resolutions designed to discourage its controversial investment in nuclear-related programs.