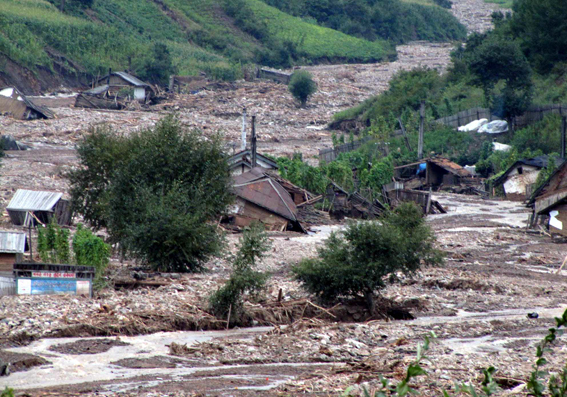 “The flood damage caused by Typhoon [Lionrock] sweeping the North Hamgyong Province from August 29 to September 2 is the ‘biggest cataclysm’ since [1945’s] Liberation,” KCNA said.

“A total of over 29,800 dwelling houses were damaged including more than the complete collapse of 11,600 houses. 900 production and public buildings were destroyed or damaged.”

A UN officer stationed in the North said the number of dead and missing exceeded 500 people.

“As of 15 September, the government has confirmed that 138 people have been killed and another 400 people remain missing as a result of the floods,” Marina Throne-Holst, an officer at Office of the United Nations Resident Coordinator in the Democratic People’s Republic of Korea (DPRK), told NK News.

“Based on official figures and assessment findings, at least 140,000 people are in urgent need of assistance. Of those, over 68,000 people remain displaced.”

Throne-Holst added 30,000 houses and 16,000 buildings, including school and public buildings were damaged. 62 percent of damaged houses have been completed destroyed. However, the officer declined to comment on how the devastating flood could affect the North’s domestic economy.

On September 11, the UN Office for the Coordination of Humanitarian Affairs (OCHA) published figures that put the death toll at 133, reporting that 107,000 had been displaced so far.

The North’s Naenara news portal on Wednesday showed images of the damaged village, and destruction of railways and roads without specifying the region.

“The flood damage in the North Hamgyong Province brings a big catastrophe to the economic development of the province and people’s lives,” Naenara reported.

The destruction of critical infrastructure, including power stations, is severe, which could be an obstacle for the North to recover from the flood damages.

The collapse of 60 bridges and 180 roadway segments in the regions leads to traffic blockades, and trains have been discontinued in 100 places since railway embankment was smashed and buried under silt, and railway roadbeds were damaged by washing.

Power stations, especially in Musan and Yonsa counties, were submerged or buried under silt which has knocked down power lines and cut off electricity.

KCNA reported that Hoeryong, Musan, Yonsa, Onsong, Kyongwon, Kyonghung County and part of Rason City were harshly hit by the typhoon due to inundation of the River Tuman. The precipitation in the region of River Tuman was the record high in the history of North’s meteorological survey.

The UNICEF (United Nations International Children’s Emergency Fund) Deputy Representative, Murat Sahin, in a district outside Hoeryong City, said the scale of the flood disaster was “beyond anything experienced by local officials.”

“This is the worst flood seen by people in North Hamgyong province in the past 60 years or more. I spoke with many affected people. As with disasters elsewhere in the world, for families, the top priorities are food and shelter,” UNICEF reported quoting Sahin as saying on Tuesday.

The photos released by the organization showed the devastated village in the North Hamyong province.

However, the authorities seem to focus on the restoration of railways in Musan County, according to the North’s state broadcast Korean Central Television (KCTV). In the case of Musan, KCTV on Wednesday and Thursday aired the video of the residents manually restoring railroads and putting a telegraph pole.

The UN World Food Programme (WFP) has provided food assistance to over 140,000 North Koreans affected by recent flooding in the northeast of the country, according to a press release on Tuesday.

The North on Wednesday also held meetings with foreign diplomats stationed in the DPRK, according to KCNA. The North provided the details of the flood damage and requested disaster aid to Mongolia, Vietnam, Laos, Indonesia, India, Cambodia, Malaysia, Iran, and Pakistan.

Nine countries were described as those who have long-term friendly relations in the Asia. However, China was not present at the diplomatic meeting.

North Korea also announced earlier this week that it would be diverting resources and manpower to the region from the projects prioritized in the current 200-day labor campaign underway since June.

“The flood damage caused by Typhoon [Lionrock] sweeping the North Hamgyong Province from August 29 to September 2 is the 'biggest cataclysm' since [1945's] Liberation,” KCNA said.