Experts suggest appearance could be mistake or 'prelude' to his re-emergence
JH Ahn August 10, 2016 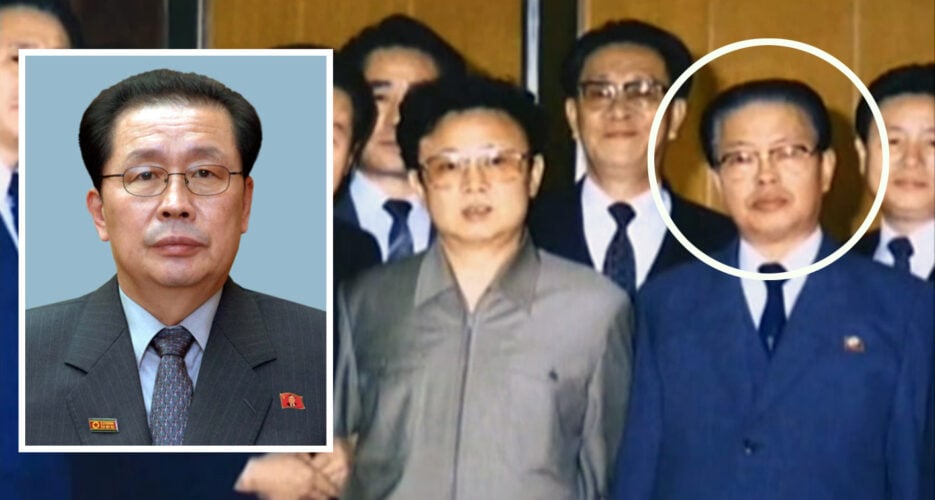 The emergence of Jang in a 1990s photo adjacent to the late leader Kim Jong Il is notable because of an extensive effort by North Korean propagandists to whitewash his image out of all media output following his execution in December 2013.

Appearing for about nine seconds during a segment about Kim Yang Gon, a former inter-Korean point-man who died reportedly in a car crash late last year, the narrator did not remark about Jang’s presence while he appeared on screen.

Jang was labelled as a ‘traitor’ during a special military tribunal held prior to his execution in December 2013, having been widely disgraced in state media at the time.

Some North Korea experts on Wednesday consequently suggested the cause of his reappearance could have been down to error.

“This kind of error – such as televising the ‘enemy of the state’ – was considered one of the most terrible ones that publishers or reporters could make during the Soviet-era,” said Dr Andrei Lankov of Kookmin University after viewing the picture.

“It is possible the editors did not recognize the younger Jang,” he continued, adding “the editor can be imprisoned, or spend the rest of his life as the restroom cleaner.”

North Korean propagandists rushed to scrub all non-negative references of Jang from state media following his execution, a development which led to the deletion of thousands of news articles and his pictures being airbrushed out of scores of TV productions.

As a result, Ph.D. Candidate Chris Green of Leiden University said that maintaining “a complex, multi-generation web of propaganda leaves open the possibility of human error.”

“I saw an enormous, framed image of Jang Song Taek still hanging prominently in a Pyongyang location in the spring of 2016,” he said.

“This may have been deliberate, it may even have been seditious, or it could simply have been an accident. The same applies here.”

Throughout his lifetime, Jang disappeared from the public eye a total of three times, though he was reinstated twice during the Kim Il Sung and Kim Jong Il eras.

However, the last disappearance under Kim Jong Un was formally described as a purge, the corresponding court case leading to his death.

Consequently, one South Korea based expert suggested it was possible that Jang’s reappearance on state-run media could be the prelude to his third reinstatement in North Korean history.

“It is hard for me to believe that the North ‘mistakenly’ televised the picture of Jang Song Thaek standing next to Kim Jong Il,” Professor Cheong Seong-chang of the Sejong Institute told NK News.

“If the North Korean leadership have purposefully broadcast his photo, then it is possible that Jang could be reinstated.”

However, a former top South Korean spy said the reinstatement of Jang was the least likely possibility.

“There is an old saying, ‘Under a totalitarian government, history is not excavated, but created.'” Ra Jong-yil, the former first deputy chief of the National Intelligence Service told NK News.

“Just because Kim Jong Un’s power has been stabilized over the years since Jang’s death, there is no chance that Jang – who was executed as a traitor – would be reinstated in any form.”

Jang’s appearance was at 57m:24s of the video when the newsreader was describing the younger days of Kim Yang Gon and how he got to work with the former leadership.

The emergence of Jang in a 1990s photo adjacent to the late leader Kim Jong Il is notable because of an extensive effort by North Korean propagandists to whitewash his image out of all media output following his execution in December 2013.