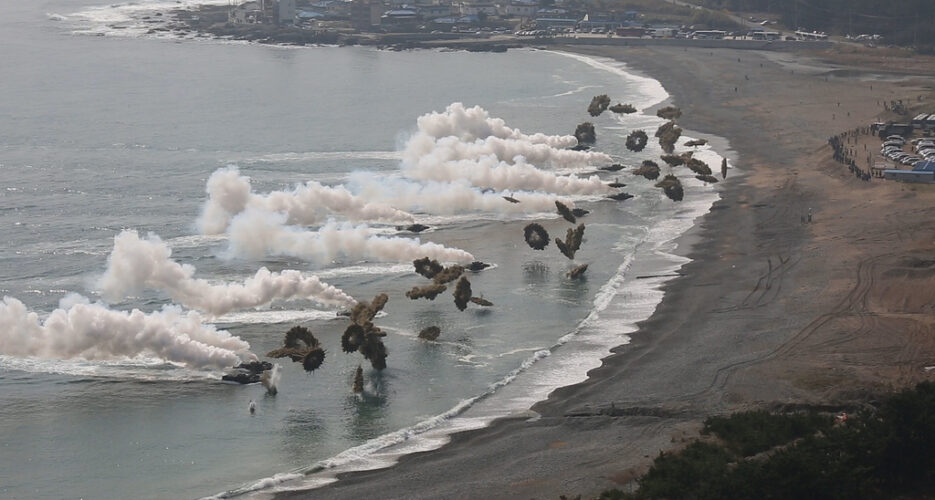 According to the KCNA article, the Korean People’s Army (KPA) mission at Panmunjeom – the location of Joint Security Area in the inter-Korean Demilitarized Zone (DMZ) – released an open letter disclosing “the gravity of military provocations and confrontation acts being made by the warmongers in the area along the Military Demarcation Line (MDL) to ignite the second Korean war.”

The North Korean news agency described the alleged acts as “heinous moves of the U.S. imperialists and the south Korean puppet forces to reduce the demilitarized zone into an outpost for invading the north.”

North Korea typically does not capitalize the S in “south” in referring to South Korea, reflecting their stance that Korea is a single country and the Republic of (South) Korea is not a legitimate government.

The letter’s contents as reported by KCNA detailed some of the alleged provocations.

South Korea’s Ministry of National Defense was willing to confirm that the military is conducting such broadcasts, but would not reveal specific details such as duration.

“I can’t confirm how long it is being broadcasted, but we are doing it intermittently,” MND spokesperson Kwon Ki-hyun told NK News.

The MND would neither confirm nor deny other claims made by the North regarding South Korea’s military operations in the vicinity of the MDL.

North Korea also referred more vaguely to “anti-DPRK war games” and military drills conducted by South Korea and the U.S. and criticized the Military Armistice Commission of the United Nations Command – which is led by the commanding general of United States Forces Korea, currently Vincent K. Brooks – as defunct. It also called it the patron of the joint South Korea-U.S. military exercises.

Pyongyang also criticized what it called a “weird act” of the United Nations Command last month. The remarks was a referring to using loudspeakers to alert the North prior to a joint operation by United Nations Command and South Korea to address the illegal presence of Chinese fishing boats in the Han River estuary.

The KCNA article also made numerous comparisons to the situation in Korea at the start of the Korean War in 1950, accusing the South of escalating tensions and preparing for a “single-handed north expedition,” referring to alleged preparations for a South Korean attack on the North.

Pyongyang maintains to the present day the Korean War was started by South Korea and that the Korean People’s Army crossed the 38th parallel as a counterattack against South Korean and U.S. forces.

Public criticism against South Korea and the U.S. and accusations of military provocations and invasion plans are particularly useful for Pyongyang as domestic propaganda.

North Korea has long used the U.S. military presence in South Korea, joint military drills, and other military operations and developments in the South as the rationale for the country’s military buildup and tight state control of the people.

According to the KCNA article, the Korean People’s Army (KPA) mission at Panmunjeom – the location of Joint Security Area in the inter-Korean Demilitarized Zone (DMZ) – released an open letter disclosing “the gravity of military provocations and confrontation acts being made by the warmongers in the area along the Military Demarcation Line (MDL) to ignite the second Korean war.”