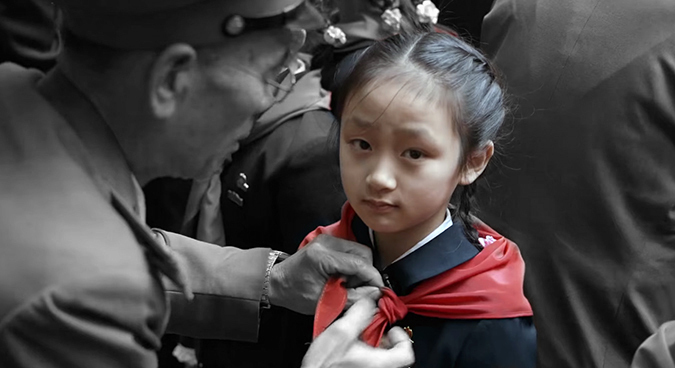 The North Korean mouthpiece Arirang-Meari on Thursday criticized the Russian movie Under the Sun, which reveals how Pyongyang manipulates its people through its media, saying that the movie “deeply hurt” the good will of North Koreans.

The article also warned the South Korean President Park Geun-hye not to use Rhee Jin Mi, the main child actress in the film, as South Korean propaganda material.

“My jaw is agape with astonishment. Is (the director) Vitaly Mansky even a human being?” Rhee Jin Mi’s mother told Arirang-Meari.

“We thought he was just filming a documentary for the sake of cultural exchange between Chosun (North Korea) and Russia. I never dreamt of him making the film – using my daughter as the main character – that portrays an anti-republic (North Korea) message …”

UK’s Guardian newspaper wrote in a previous piece that the film reveals “how government representatives seek to construct an image of an ‘ideal’ family, capturing the hectoring of officials as they tell the Koreans what to say, how to sit and when to smile.”

In the article, Jin Mi’s mother explained that it is true that such directions were given, but said it was necessary as her daughter is not a professional actress.

“Unless my daughter Rhee is a professional actress, she may or may not be able to act as the director wishes (all the time). So sometimes we had to shoot the scene repeatedly, even the adult or professional actors would do the same.” said Rhee’s mother.

“While this was documentary film, some repeated filming was still inevitable. I did not know that the black-hearted Vitaly Mansky would intentionally edit the scenes to make a such movie.”

Toward the end of the article, mother lost her composure and called the film director a “woman-beater,” “miser,” “hypocrite” and “filth of humankind.”

“Simply put, Vitaly Mansky is hypocrite, corrupt miser and the filth of humankind … Jin Mi even told me that the director used to recklessly beat a Russian called Sasha in front of her, because the finished product did not meet his standards.”

About two weeks ago, South Korean President Park Geun-hye on Children’s Day watched the movie in a theater located in Seoul.

After watching the movie, the president said that she “felt the need to take care of North Korean children, who are living without a dream in destitute conditions on Children’s Day,” Dajeon Today reported.

“I hope this (movie) becomes an opportunity to lead the denuclearization of North Korea and to look after North Koreans and their children’s lives,” the president said.

But Jin Mi’s mother had a message to deliver to the South Korean president.

“I want to tell the South Korean leader, ‘Don’t fool around with our young Jin Mi’ … Our Jin Mi was graced with highest honor by giving a flower bouquet to our dear leader Kim Jong Un during the mass rally held in Pyongyang after the Seventh Congress of Korean Worker’s Party (WPK) was concluded,” said Jin Mi’s mother.

“I watched the movie as well, and unlike what North Korea is claiming about the director’s ‘crooked intentions,’ the movie portrays the true picture of the North Korean life without exaggeration,” Kang Dong-wan of Dong-a University, who is also working as the chief of Busan Hana Center, the institute that helps the North Korean defectors in Busan.


“What North Korea is saying in the article is more or less of the efforts to rebut their poor state of human rights situation in the country,” Kang told NK News.

Jin Mi’s mother ended her interview praising North Korea as the best country in the world.

“Our Jin Mi’s life, embraced with the happiness and glory, is prospering with her hope and talent along with the rest of the state’s children. What greater happiness, and greater glory can there be?”


The North Korean mouthpiece Arirang-Meari on Thursday criticized the Russian movie Under the Sun, which reveals how Pyongyang manipulates its people through its media, saying that the movie “deeply hurt” the good will of North Koreans.

The article also warned the South Korean President Park Geun-hye not to use Rhee Jin Mi, the main child actress in the film, as South Korean propaganda material.