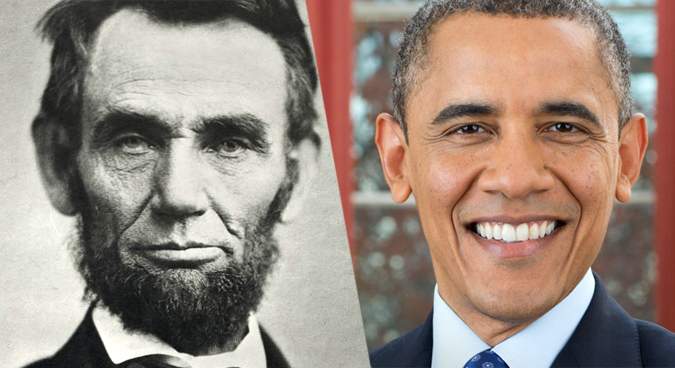 The letter uses the voice of Abraham Lincoln, regarded by many historians as the greatest U.S. president in history, to endorse North Korea and criticized Washington’s policy towards Pyongyang. The letter even paraphrases Lincoln’s Gettysburg Address, from 1863, to call North Korea “the government of the people, by the people, for the people.”

“And shall not perish from the earth … my past speech (at Gettysburg) applies as if I were describing the People’s Republic (North Korea), the country that is contesting against the U.S. politicians.”

The letter of a few hundred words criticizes President Obama’s approach to North Korea, from the recently imposed UN sanctions to claims that Pyongyang has violated the human rights of its citizens.

“Listen, Obama,” says “Lincoln” in the letter. “I know you are having a hard time these days, but I think you, as the U.S. President, should formulate policy a bit better.”

The letter criticizes President’s Obama’s failure to denuclearize the world, an objective Obama announced early in his first term.

“Obama, isn’t it the right procedure for the U.S. to begin by starting the denuclearization of itself, as it has countless numbers of nuclear weapons all around the world?” the letter wrote.

The letter also criticizes the economic sanctions against North Koreans as “shameful.”

“Look, Obama, the U.S. has been threatening the stability and peace of that small country in the East for more than 70 years, and such an act is so shameful that I can’t bear to see the U.S. obstructing the people’s development,” it reads.

“It stifles my chest to hear the news of the punishing UN sanctions imposed against that country … that country will never fall from the effect of sanctions or economic blockades.”

The letter also compares the sanctions to Lincoln’s announcement of the Emancipation Proclamation, calling both tactics to dismantle a rival state.

“The U.S.’s old tactic of manipulation and deception through the guarantee of ‘human rights’ and ‘equality’ will not work against North Korea (as it did against the Confederacy),” Lincoln said.

“Americans lionize me as an emancipator of black slaves … but only few know of my true intentions behind the announcement of Emancipation Proclamation,” Lincoln said. “To bring the victory for the Union, I felt the dire necessity to announce the emancipation of black slaves … and I suitably took advantage of it (to win the war).”

A South Korean researcher called this letter part of Pyongyang’s desperate attempt to appeal to American readers, so that the country may view North Korea more favorably.

“This letter shows that Pyongyang is trying to eases tension with the U.S. even by imitating America’s most well-known figure to make themselves as ‘American’ as they can be,” said Suh Dong-gu, the visiting researcher at the Korea Institute for National Unification (KINU).

Suh added that North Korea’s lack of understanding of American society made this propaganda letter to only look “comical” to American readers.

“Obama, it is the 21st century now. The old manipulation tactics (using human rights as the leverage) are no longer valid in today’s world. No one in the world will trust the word of the U.S., which has failed to keep it in the past,” the North Korean “Lincoln” said.

It is not unheard of for North Korea to appropriate famous individuals from other countries to bolster its own case. In 2015, the state-run Rodong Sinmun wrote that North Korean national founder Kim Il Sung is greater than George Washington, Thomas Jefferson and Abraham Lincoln combined.

Image: The White House photos of Lincoln and Obama

The letter uses the voice of Abraham Lincoln, regarded by many historians as the greatest U.S. president in history, to endorse North Korea and criticized Washington's policy towards Pyongyang. The letter even paraphrases Lincoln’s Gettysburg Address, from 1863, to call North Korea "the government of the people, by the people, for the people.”