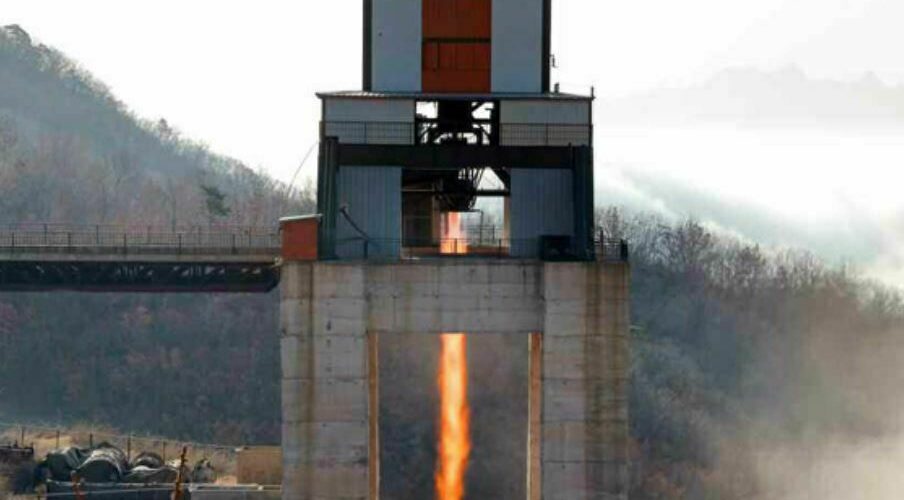 According to the KCNA, North Korea conducted a successful “ground jet test of a new type high-power engine of inter-continental ballistic rocket” under the guidance of North Korean Supreme Leader Kim Jong Un at Sohae Space Center in North Phyongan Province, on the country’s west coast.

The state media reported said the test “satisfied all scientific and technological indexes.”

North Korean leader Kim Jong Un boasted of the test’s success and claimed North Korea has the ability to conduct a nuclear strike against the United States.

The KCNA quoted Kim Jong Un as saying the test “provided a firm guarantee for mounting another form of nuclear attack upon the U.S. imperialists and other hostile forces.”

“Now the DPRK can tip new type inter-continental ballistic rockets with more powerful nuclear warheads and keep any cesspool of evils in the earth including the U.S. mainland within our striking range and reduce them to ashes,” Kim reportedly said. Kim stressed “the need to diversify nuclear attack means at a higher level to cope with the ever-more increasing nuclear threats and arbitrariness of the U.S. imperialists and thus decisively counter nukes in kind.”

If Pyongyang has succeeded in developing a working ICBM engine, it will bolster the North’s efforts to develop an ability to conduct strikes against targets such as the U.S. and strengthen the credibility of North Korea’s nuclear deterrent.

It is not yet known if the engine tested is that of the Hwasong-13 (known outside North Korea as KN-08) ballistic missile or for some other type of missile. Photographs of the test did not fully show the rocket itself.

North Korea conducted another ground test of a solid-fuel rocket engine late last month. The KCNA did not specify if this ICBM engine test utilized solid fuel or liquid fuel. According to experts, solid-fuel rockets provide a military advantage because they can be fueled in advance and stay fueled for a long time, allowing them to be launched relatively quickly and with little warning.

On Wednesday, South Korea’s government revealed that it assessed North Korea may now be able to mount a miniaturized nuclear warhead on a medium-range ballistic missile, such as the North’s Rodong-1 missile.

North Korea announced through its state media on March 9 that it had successfully “standardized” a miniaturized nuclear device, becoming able to mount it onto a ballistic missile. The North’s state media published photographs of leader Kim Jong Un with a spherical nuclear device – presumably a mockup – as well as Hwasong-13 (KN-08) and Rodong ballistic missiles and a diagram of a nuclear warhead within a re-entry vehicle.

North Korea conducted its fourth nuclear test on January 6, which Pyongyang promptly reported as a successful test of a hydrogen bomb. Following these tests, North Korea has conducted a series of publicized weapons tests in an apparent effort to demonstrate a diverse military capability and credible nuclear deterrent.

According to the KCNA, North Korea conducted a successful “ground jet test of a new type high-power engine of inter-continental ballistic rocket” under the guidance of North Korean Supreme Leader Kim Jong Un at Sohae Space Center in North Phyongan Province, on the country’s west coast.