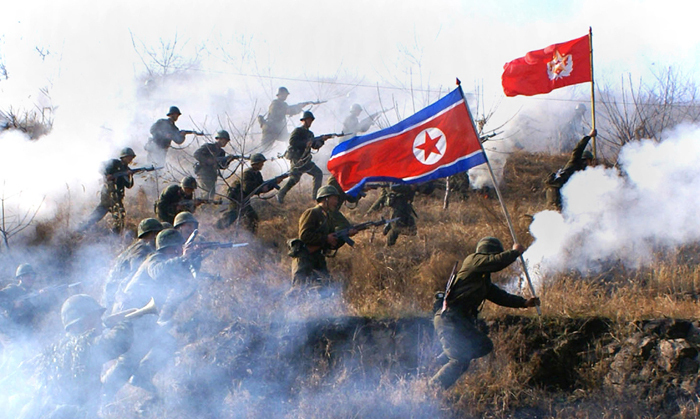 Just as they did a few days ago, North Korea reacted furiously toward a theoretical “beheading operation” by its enemies to terminate Supreme Leader Kim Jong Un should Pyongyang show any signs of using weapons of mass destruction.

“The army and people of the DPRK will launch an all-out offensive to decisively counter the U.S. and its followers’ hysterical nuclear war moves to plunge our republic,” wrote the Korean Central News Agency (KCNA) on Monday, when the annual ROK-U.S. joint training was announced.

The statement claimed that North Korea has its own military plan to “liberate” South Korea and strike the U.S. mainland.

“We declare without hesitation that our half-century long prepared ‘unification holy war’ will occur in a speedy way that none of the world has ever heard or seen,” it said.

North Korea has also stated that the U.S. military bases in Pacific region will suddenly turn into the sea of fire and heap of ashes “as soon as North Korea presses the button.”

“No matter where the U.S.’s nuclear assets are, whether they are in the air, on the ocean or on the land, we will turn them in to the unrenewable scraps of metal.”

It also took aim at the recent U.S.-led sanctions against Pyongyang.

“It is Yankees’ ultimate double standard that the world’s most hideous ‘nuclear criminal,’ the U.S., is talking of nuclear deterrence to maintain ‘peace,’ while claiming our peaceful rocket launch is a long-range missile and manipulating the recent UN sanctions (to pressure North Korea).”

A few hours after North Korea released the statement, the South Korean defense spokesperson said that there were no early signs of North Korean provocations.

“This ROK-U.S. training is the biggest of its kind, with 300,000 South Korean troops and 17,000 U.S. troops participating,” said Moon Sang-kyun, the Defense Ministry’s spokesperson, who emphasized that the exercise is solely for defensive purposes.

“There have been no early signs of North Korean provocations so far … we warn the North Koreans to stop the recklessness provocation that will only lead to self-destruction,” the Newsis agency reported.

Yang Uk, the senior research fellow from the Korea Defense and Security Forum (KODEF) told NK News that North Korea’s sensitive reaction during the ROK-U.S. joint training is nothing surprising.

“The chance of outbreak of war is close to none, unless North Korea miscalculates the situation,” Yang said. “North Korea’s reaction, to mention the nuclear strike even during the joint training and the ongoing sanctioons reflects that the country is feeling immensely pressured.”

North Korean’s nuclear threats resumed last Friday, the week before the beginning of the ROK-U.S. joint training, when the government’s spokesperson said North Korean actions against their enemies “will include the number of kinds of powerful and merciless methods including physical actions.”

Just as they did a few days ago, North Korea reacted furiously toward a theoretical "beheading operation" by its enemies to terminate Supreme Leader Kim Jong Un should Pyongyang show any signs of using weapons of mass destruction.