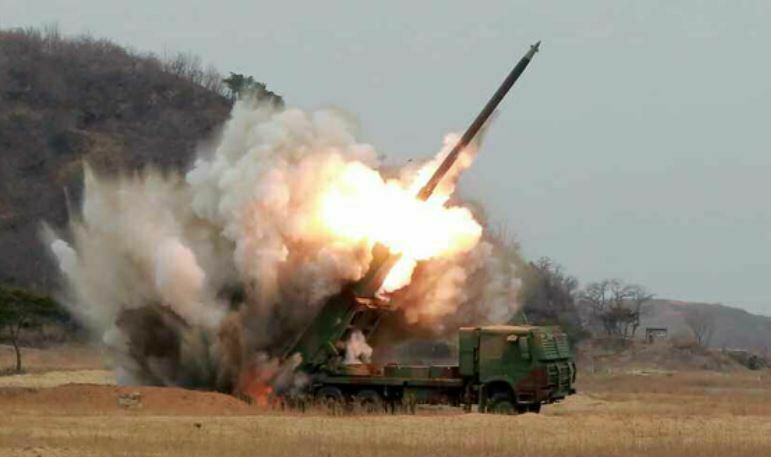 North Korea’s state media described the country’s new 300mm rocket artillery system for the first time on Friday. The article and photographs published by state media – combined with the data reported by the South Korean military Thursday – revealed details of the weapon, including that it may be among the longest ranging of such weapons and may take design cues from American-made weapons.

The 300mm multiple rocket launcher (MRL) has been suspected to exist since at least 2014 and was first shown in a parade in Pyongyang on October 10, 2015, but Friday’s report is the first time Pyongyang’s media has clearly described the system in conjunction with photographs.

The Korean Central News Agency (KCNA) and Rodong Sinmun reported North Korean leader Kim Jong Un’s attendance at a test firing of the system on Thursday, which was detected by the South Korean military. Among those accompanying Kim was Hong Yong Chil, deputy director of the WPK Machine-Building Industry Department and a key arms industry official who is usually present when the DPRK is testing new weapons systems.

Friday’s state media report reinforced assessments that North Korea timed the launch to serve as a response to Resolution 2270 being passed unanimously by the United Nations Security Council (UNSC) and updated sanctions by the United States Treasury Department’s Office of Foreign Assets Control (OFAC), both on Wednesday.

Pyongyang’s state media article opened by stating that “The U.S. imperialists and their followers’ flagrant moves for political and economic pressure and military aggression on the DPRK have gone to a grave phase that can no longer be overlooked.”

After some elaboration and criticism of South Korean President Park Geun-hye, the article segued into Thursday’s launch.

“Under such situation, there took place a test-fire for estimating the might of controlled ordnance rocket warhead for large-caliber multiple launch rocket system of new type to be deployed in the reserve artillery units of the Korean People’s Army.”

The existence of a North Korean 300mm MRL has been suspected since at least 2014. Chosun Ilbo reported in March 2014 that South Korean military authorities assessed tests from the month prior to be a 300mm MRL. That same month, NK News and Arms Control Wonk analyzed the then-available information on the system and assessed possible origins and consequences. Jeffrey Lewis at Arms Control Wonk also noted North Korea was known to be developing a clone of the Russian BM-30 300mm MRL (or one of the Chinese derivatives thereof).

The first visual confirmation of the weapon system’s existence appeared on October 10, 2015, in footage and photographs of the parade held in Pyongyang for the 70th anniversary of the foundation fo the Workers’ Party of Korea. As Joost Oliemans and Stijn Mitzer noted in October, the vehicle for the launcher appears to be the ZZ2257N5857A HOWO 6×6 All-wheel Drive Cargo Truck, made by China’s state-owned China National Heavy Duty Truck Group (a.k.a. Sinotruk). The launchers shown by state media on Friday appear to be the same type, albeit a slightly improved version.

In addition to a new paint job, the cab of the vehicle now features armored louvers to protect the windshield from the rocket blast during launches. More importantly, there are still eight launch tubes, but they now appear to be contained in two pods of four tubes each. The usage of pods on missile and rocket systems is advantageous in combat scenarios. Multiple pods can be preloaded with missiles and swapped out on the launcher, instead of having to reload the individual tubes after firing the rockets or missiles in them.

Choi Hyun-ho, director of Mildom.net, a South Korean military-focused website, noted the similarities with U.S. and South Korean rockets, but believes the guidance system is likely either Chinese or Russian.

“I can see two fins on the head of the rocket, and such fins can be found on GMLRS. South Korean Chunmoo MLR has two fins as well,” Choi told NK News.

“There is not much chance that North Korea would have used the U.S. made GPS system on their GMLRS as the country often carries out the GPS jamming attack on South Korean troops,” said Choi. “I suspect China’s Baidu system or the Russian GLONASS system are two strong candidates.”

Kim Min-seok, senior researcher at Korea Defense and Security Forum, agreed that the North Korean system may have borrowed from U.S. designs for accuracy. He also believes the weapon to have a range at least equal to that of the of South Korea’s Chunmoo.

The exact capabilities of the North Korean MRL are still unconfirmed. However, the ranges reported by the South Korean military for Thursday morning’s launch were in excess of 100 kilometers. If accurate, this means that North Korea’s MRL is among the longest ranging in the world of such weapon systems, comparable to the 120 kilometer-range of the American GMLRS.

JH Ahn contributed to this report.

North Korea’s state media described the country’s new 300mm rocket artillery system for the first time on Friday. The article and photographs published by state media – combined with the data reported by the South Korean military Thursday – revealed details of the weapon, including that it may be among the longest ranging of such weapons and may take design cues from American-made weapons.