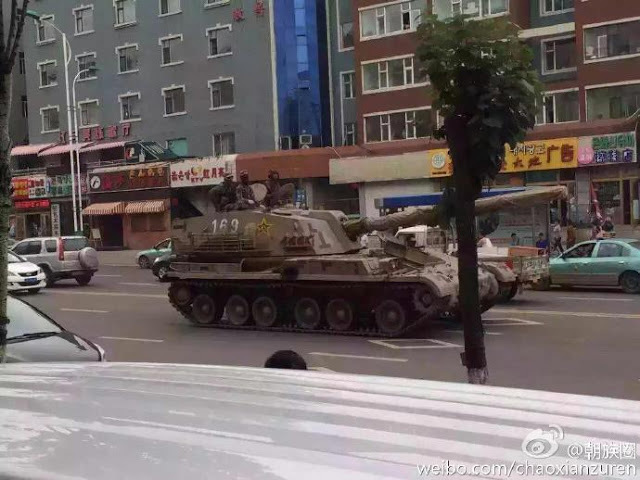 The movements of a mechanical unit at least the size of a brigade were spotted in the city of Yanji, China, in the autonomous region of Yanbian bordering North Korea.

According to pictures released on Chinese blogs, the mechanical units of the People’s Liberation Army were composed of PTZ-89 tank destroyers (Type 89), a PGZ-95 self-propelled anti-aircraft guns (Type 95 SPAAA) and 155 mm self-propelled guns.

Pictures were first uploaded on the China-based microblogging service Weibo around Saturday. Despite the sudden and irregular movement of troops, the Chinese government has not confirmed or officially reported on the incident yet.

“The Chinese authorities appear to be censoring posts on the topic of the Yanji deployment by Weibo users and independent bloggers, as well as preventing media coverage of the troop movements,” said NK News China specialist Jennifer Dodgson. “Nevertheless, posts on Chinese internet forums citing overseas Chinese media reports on the matter continue to surface, including on state-owned platforms.”

“From what I know, it is not the first time they have sent units as big as this near the China–North Korea border,” said Kim Min-seok, researcher at the Korea Defense and Security Forum. “During the bombardment of Yeonpyeong in 2010 and after the purge of Jang Song Thaek in 2013, Chinese units were quickly sent to the area to prevent any unexpected surprises from the China-North Korea border.”

Kim also said that these mechanized units have one purpose, which is “to quickly resolve the inflamed situation by marching in North Korea, if necessary.”

“The composition of these units is aimed to achieve high mobility, high fire power and light weight compared to common mechanized units around the world. The PTZ-89 tank destroyer, despite its name, is not considered a conventional heavy tank in the terms of military equipment. They are considered light tanks and are meant to have equally high fire power as heavy tanks, with lighter armor to maximize the mobility of units.

“China’s message is simple: Their units are focused on quickly invading North Korea as fast as they can, suppressing all opponents with the maximum fire power that Chinese mechanized units can provide,” Kim said. “Also, these light-weight mechanized units will survive North Korea’s poor road conditions, which conventional heavy tanks can’t.”

He also noted that China’s PLA has repeatedly trained for crossing the Yalu River many times before, meaning that the Chinese Army would not find it hard to cross the river into North Korea should such an action become necessary.

“That mechanical brigade alone is powerful enough to obliterate the border defenses of North Korea, even before they realize it is coming. But they are certainly not strong enough to stand against the ROK-U.S. joint forces.”

‘China is sending a very simple message to North Korea’

The message, one expert said, is a reply to one the North previously sent China’s way.

“This is no joke, China is sending a very simple message to North Korea,” said Cha Du-hyeogn, the former secretary to President Lee Myung-bak for crisis information. “Back on (Friday), North Korea publicly stated that ‘no country in the world can stop’ North Korea from further escalating the current situation, and that message was directly aimed to tackle China, for them possibly trying to interfere and disrupt the goal that North Korea was trying to achieve from these recent provocations.”

Cha said that this movement is for demonstration purposes only, not for an actual invasion of North Korea.

“These movements are certainly not just for enhancing the border defenses between China and North Korea. Armed police forces are responsible for the China-North Korea border, but these units have nothing to do with border defenses, nor do they belong to the armed police.”

“But China won’t invade North Korea as it would only increase international tension. If there is one thing that China and the U.S. have in common, is that they neither one want to see North Korea become the center of an international incident,” he said. “China’s message is strong and simple: ‘Yes, we can stop you, if necessary.’”

He said, however, that this demonstration was not aimed against the U.S. or South Korea.

“If China really wanted to send a message against South Korea and the U.S., they would have used the navy or air force as weapon of choice, as none of the countries mentioned above share a land border with China. But why would they want to agitate South Korea and the U.S. when North Korea is clearly causing mayhem for the world?”

John Grisafi contributed to his article.

The movements of a mechanical unit at least the size of a brigade were spotted in the city of Yanji, China, in the autonomous region of Yanbian bordering North Korea.

According to pictures released on Chinese blogs, the mechanical units of the People’s Liberation Army were composed of PTZ-89 tank destroyers (Type 89), a PGZ-95 self-propelled anti-aircraft guns (Type 95 SPAAA) and 155 mm self-propelled guns.