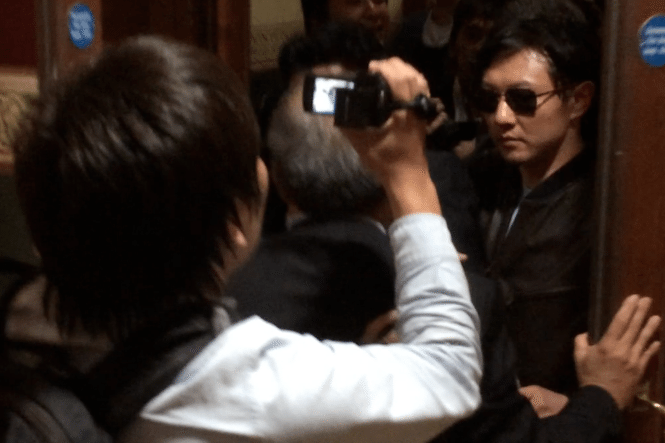 Kim Jong Chul on the second evening was sitting in an area next to the stage and surrounded by what Paterson believed to be officials from North Korea’s Embassy in the United Kingdom.

“But the obviously older guy next to him was clearly neither a typical Clapton fan or dressed for a gig.”

While the alleged embassy officials did not share the same enthusiasm for Clapton’s songs as Kim Jong Chul, known to be a major fan of the guitarist, they managed to enthusiastically clap, Paterson added.

Japanese and South Korean media were also at the venue May 21, after having caught wind of Kim Jong Chul’s attendance the previous evening.

“At the end, Japanese media, especially Tokyo Broadcasting System, had his area of the venue staked out and he walked right into it,” Paterson said.

“Japanese media, as they often do on North Korea stories, went all-in, and his minders did everything they could to fend them off, until eventually he escaped the venue.”

Kim Jong Chul is the second of three sons by the late Kim Jong Il; the oldest is Kim Jong Nam, whom Japanese authorities detained at Tokyo’s Nartia International Airport in 2001 for attempting to enter their country on a forged Dominican Republic passport.

Kim Jong Il passed over those two brothers in the last decade for succession to head of the Worker’s Party of Korea, which would have thus made either of them North Korea’s de facto leader, in favor of his youngest son Kim Jong Un.

Christopher is a freelance NK News contributor based in London