“Remember that the DPRK has massive uranium deposits,” instructed a North Korean official during a recent visit to Pyongyang. The subject of natural uranium subsequently arose again during discussions. This was the first time in three years that it was raised in our security-focused conversations.

Partly as a result of the subject’s previous obscurity, uranium-mining activities had indeed escaped my curiosity. A brief examination of open-source literature on North Korea suggests that the country’s uranium mining has evaded the attention of most other analysts as well. So how “massive” are the DPRK’s deposits, where do they fit into the nuclear complex, and why does the subject appear to be resurfacing in propaganda?

Natural uranium is the starting point for North Korea’s weapons-usable plutonium-production efforts, as well as its uranium-enrichment program. In 2013, North Korea announced that it would resume operations of its 5MWe gas-graphite reactor at Yongbyon. The reactor had been a critical component of the North’s plutonium-based nuclear weapons program, but was shuttered in 2008 as a show of good will in the Six-Party Talks. To create fuel for such a reactor, natural uranium is first milled into uranium oxide (“yellowcake”), subsequently converted into uranium metal and then fabricated into fuel.

Domestically available uranium is similarly useful for uranium enrichment – the DPRK’s second potential road to a bomb. Uranium ore is milled into yellowcake and converted into uranium hexafluoride (UF6), which is then enriched in centrifuges, or by other means.

With the 5MWe reactor up and running again, the enrichment facility at Yongbyon expanded, and construction continuing on the Experimental Light Water Reactor, there will be renewed demand for uranium ore to feed into these processes.

Interest in the DPRK’s wealth of recoverable uranium pre-dates the Korean War. As Jonathan Pollack notes in No Exit: North Korea, Nuclear Weapons and International Security, during World War II Japan was “exploring for uranium and various rare earth metals in the northern half of the peninsula.” Moscow followed suit, and undertook uranium mining north of the 38th parallel as early as 1946. North Korea’s 1959 nuclear cooperation agreement with the Soviet Union allegedly led to further geological surveying, and uncovered new deposits of uranium ore.

Estimates of the size of these deposits vary widely. In 2012 the South Korean Ministry of Unification assessed that “North Korea is…known to have about 4 million tons of uranium in recoverable deposits.” Edward Yoon’s report for the Nautilus Institute cited private business contacts in the DPRK and China when quoting a higher number. “The DPRK’s deposits of uranium ore amount to approximately 26 million tons,” it said.

One of the challenges in comparing these numbers is it is unclear whether they refer to the uranium ore contained in the deposits, or the deposits themselves. Uranium in North Korea is commonly found in monazite, a phosphate mineral that also contains thorium.

The precise number and location of the DPRK’s uranium mines are also difficult to pinpoint, though some are relatively well-known. The uranium mine at Pyongsan County in North Hwanghae Province is amongst the largest and most renowned. It has allegedly been operating for over three decades, and was declared by the DPRK to the International Atomic Energy Agency (IAEA) in 1992. Some suggest that it has an annual production capability of approximately 10,000 tons of uranium. The mined ore is sent onwards to nearby milling facilities in the same complex, where the uranium is extracted or leached from the ore to produce yellowcake.

Michael Madden has documented a second uranium mining and milling complex in North Pyongan province, which he believes includes approximately four mines: at Pakchon, Cholsan, Kujang and Sunchon. The former was mentioned in a declassified Russian foreign intelligence document from 1993 as being a primary national uranium mine. Its matching milling facility – or “Uranium Concentrate Pilot Plant” – was disclosed to the IAEA and visited by inspectors in 1992.

Yet others mines have been discussed in open sources. The DPRK disclosed a site at Wolbisan to the IAEA, though inspectors do not appear to have visited it. Drawing upon his conversations with private sources, Edward Yoon refers to a mine at Woong-gi, in “Hamkyung Province” (north or south is not specified). The Nuclear Threat Initiative also published a map pinpointing various uranium mines, though in some cases their existence or active status cannot be verified.

The DPRK’s uranium mining activity appears to have recently garnered renewed attention from the country’s leadership. The Minju Joson reported the details of a DPRK Cabinet meeting, held on April 21, 2013, in which it was decided that “the atomic industrial sector should actively carry out the uranium ore prospecting and should increase production.” Furthermore the DPRK “should qualitatively produce and supply with top priority the…raw materials and supplies necessary for reinstating the operation of major production processes such as the graphite-moderated reactor of atomic power plant.”

Recent propaganda similarly hints that resources are being channelled towards this directive. Though not necessarily an indicator of direct oversight of uranium mining or milling activity, since the April 2013 Cabinet meeting, Premier Pak Pong Ju has been making frequent visits to industrial complexes near known uranium sites.

In addition, on July 1, 2014, the KCNA boasted of recent scientific successes by Kim Chaek University of Technology, believed to be one of the main educational institutes involved in uranium deposit surveying. The university has apparently developed “high-tech prospecting apparatuses,” which have been put to use in surveying North Pyongan province – the location of one of the country’s main uranium mining complexes. Two weeks later, KCNA again praised the university for developing “direct current electro prospecting apparatus for underground resources, which is now popular among collieries and mines of the country.”

This apparent prioritization complements the impression received from our direct instructions to bear North Korea’s “massive uranium deposits” in mind. Our interlocutors in Pyongyang implied that, seen together with the country’s growing nuclear infrastructure and capabilities, those uranium deposits are further proof that the DPRK’s nuclear program is not hampered by externally-imposed restrictions. Similarly, the reserves should be seen as a strategic asset. The size of domestic uranium deposits was mentioned in the same breath as the country’s allegedly expanding nuclear arsenal. The message therefore appears to be that the availability of material enables the unfettered growth of the national deterrent, and at the moment, all signs are pointing to Pyongyang’s determined nuclear advancement.

“Remember that the DPRK has massive uranium deposits,” instructed a North Korean official during a recent visit to Pyongyang. The subject of natural uranium subsequently arose again during discussions. This was the first time in three years that it was raised in our security-focused conversations.

Partly as a result of the subject’s previous obscurity, uranium-mining activities had indeed escaped my curiosity. A brief examination of open-source literature on North Korea suggests that the country’s uranium mining has evaded the attention of most other analysts as well. So how “massive” are the DPRK’s deposits, where do they fit into the nuclear complex, and why does the subject appear to be resurfacing in propaganda? 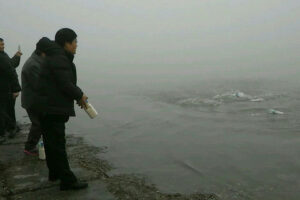 Andrea Berger is a Senior Research Associate and a Senior Program Manager at the James Martin Center for Nonproliferation Studies.