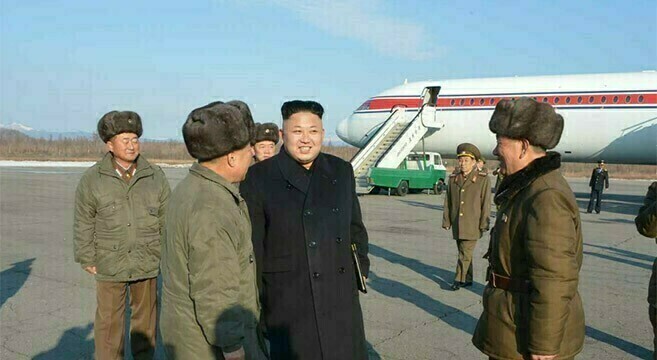 The photographs, which indicate that Kim Jong Un does not share the same fear of flying that reportedly afflicted the late Kim Jong Il, appear to show a North Korea leader using a state owned aircraft for domestic travel for the first time in decades.

Kim Jong Un was shown appearing to disembark from one of North Korea’s only four working Ilyushin-62 aircraft, Soviet-era airliners that were banned from making commercial flights through Chinese airspace in 2013.

Although Chinese authorities never issued an official reason for the restriction, North Korean IL-62s were banned from landing in Europe in 2006 due to concerns that the jets did not have adequate security systems installed.

But while the IL-62 is banned from making passenger services in Chinese airspace, it is still allowed to enter for state and strictly diplomatic purposes. Of the four IL-62s in service, two are for passenger services and two, including the aircraft pictured, are for VIP’s and diplomats.

North Korean aviation expert David Thompson, who runs a travel company specializing in aviation themed trips to the DPRK, told NK News that the two “VIP”  IL-62s are rarely seen in use.

“They are very rarely seen either inside or outside of the DPRK and a recent rumor was that they had been scrapped for parts.

“However, our aviation tours were lucky enough to spot both aircraft last year… and both aircraft looked absolutely immaculate and in full working order,” Thompson said.

Despite being painted in the livery of state airline Air Koryo, North Korea’s two VIP IL-62s lack any airline branding on the fuselage exterior, making it difficult to determine whether they are airline or air force owned.

The IL-62 is also used by Cuban flag carrier Air Cubana, which transferred an old model – since dismantled for parts – to North Korea in 2013.

The IL-62 model has been involved in 12 fatal incidents since its creation in 1963 and in 1982 a North Korean IL-62M jet, departing from Pyongyang, crashed into the Fouta Djall Mountains in Guinea – killing all 23 people onboard.

The jet, which had been bound for the Conakry International Airport in Guinea, was being operated by the Civil Aviation Administration of Korea (CAAK), which was the former name of Air Koryo.

Despite being the only major incident involving an Air Koryo plane, former leader Kim Jong Il was widely reported to travel only by land, due to a fear of flying stemming from a helicopter accident in 1976.

Kim Jong Il was only captured travelling by plane once, during a broadcast by Korea Central TV as he was scouting locations for film sets.

Kim Jong Un was in the Mt. Paekdu area on Wednesday to deliver a speech to commanding officers of the Korean People’s Army and to observe an “oath making meeting” at the base of a statue of grandfather Kim Il Sung at the Samjiyon Grand Monument.

The photographs, which indicate that Kim Jong Un does not share the same fear of flying that reportedly afflicted the late Kim Jong Il, appear to show a North Korea leader using a state owned aircraft for domestic travel for the first time in decades.