The protest, which started on Sunday at 2:30 pm in front of the Hong Kong Immigration Tower, was aimed at urging the North Korean government to improve its human rights record and to immediately abolish political prison camps.

The organizers got help in drawing attention to their cause from a recently famous Kim Jong Un lookalike.

The lookalike, known only as ‘Howard’, was invited to assist the human rights group in drawing attention to problems in North Korea just a few days ahead of the anniversary of former leader Kim Jong Il’s death.

“This situation(China’s repatriation of North Korean defectors) is unacceptable and extremely unethical,” said Howard, a Hong-Kong born musician that has never revealed his full name.

“Do we need to be sending these people back to their death? China has no reason to this. China should be taking care of these defectors,” Howard added.

Howard, who is the world’s first Kim Jong Un impersonator, rose to international notoriety after a video of him wowing onlookers in Hong Kong went viral in summer.

“Actually, I was hired by this group, and I’m getting paid. It took six hours to finish this haircut and makeup” Howard pointed out.

“But I’m not doing this just for money. I was already aware of the defector issue. It’s worthy to promote. That’s why I’m here. By having me here, they got all the media here, and that’s how to make people pay attention,” he added. 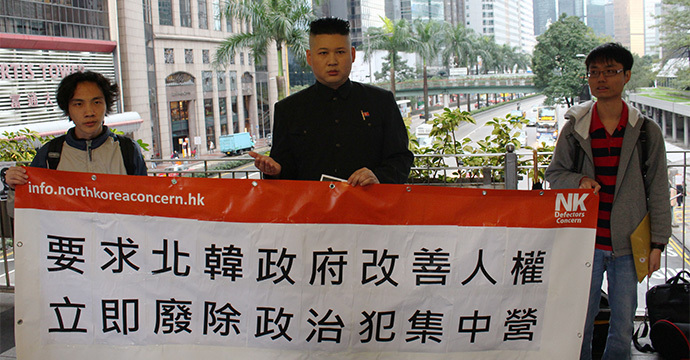 NK Defector Concerns is the first North Korean human rights organization in Hong Kong, which was established in 2012 by Owen Lau and three more co-founders.

The organization has been holding various events, such as street protests, online campaigns, and exhibitions, to call China to stop sending North Korean defectors back to the DPRK.

The Hong Kong-based human rights group North Korea Defector Concerns received unprecedented media attention on Sunday when it held a protest to draw attention to North Korea human rights abuses, thanks to a local Kim Jong Un impersonator.The protest, which started on Sunday at 2:30 pm in front of the Hong Kong Immigration Tower, was aimed at urging the North Korean government to improve its

Tae-jun Kang is the NK News East Asia Correspondent and is based in Hong Kong. Prior to writing, he worked as a riot police officer in South Korea for two years. He can be reached at [email protected] or @taejun_kang on twitter.