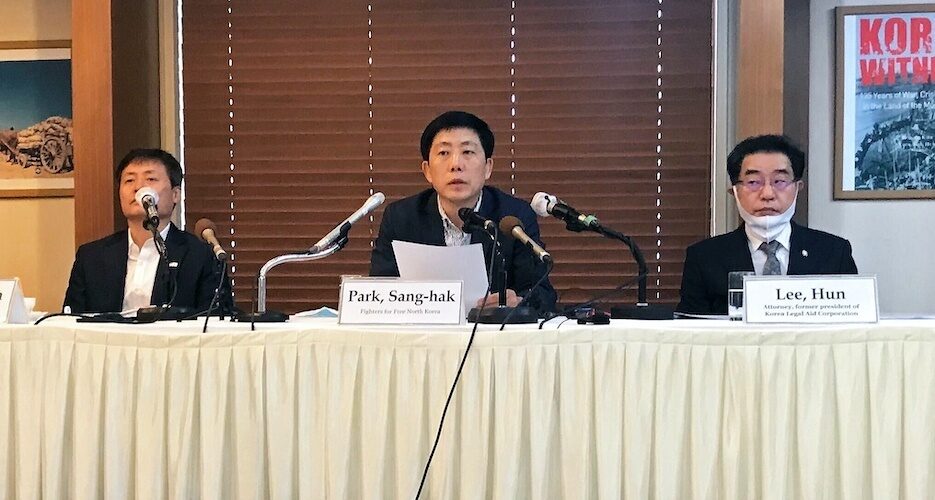 Defector-activist Park Sang-hak on Monday promised to continue a controversial campaign to send leaflets into North Korea, promising to defy a recent order by the South Korean government to stop all propaganda send-overs.

Speaking to foreign media at the Seoul Foreign Correspondents’ Club, Park — who heads the Fighters for a Free North Korea (FFNK) group — defended his organization’s use of propaganda leaflets against the North.

“As long as he continues to pressure the 20 million of our fellow North Korean residents in detention camps, we will continue to send the leaflets,” Park stated, promising to defy what he called the “pro-Juche” South Korean government’s efforts to stop his activist work.

Those leaflets were sent by an NGO called the “Blue Union” more than seven years ago, he said.

“I don’t know anything about Ri Sol Ju, or whether she had her clothes on or off,” Park stated. “We have never sent leaflets that contain that type of information.”

NK News also asked Park to respond to Seoul’s previous claims that some of the FFNK leaflets sent on June 22 failed to reach North Korea. Park acknowledged that some leaflets landed in the South Korean countryside because of an organizational “mistake.”

“We could not find the other 18 balloons — so, what does that mean? I believe they reached North Korea,” Park said,  further claiming that previous leaflet launches had successfully made ground deep inside North Korean territory.

“The ones that we sent on April 30 landed near Pyongyang city, in fact near Kim Il Sung University,” he added, citing “rumors” that leaflets sent on May 31 had landed in Yangdok, the site of a hot springs resort built by the DPRK last year.

“Kim Jong Un built a summerhouse in Yangdok,” Park said. “The rumors were that Kim Jong Un was at this summerhouse, but because of the leaflets that landed, his overall mood was bad and that’s why he returned home.”

“He was enjoying his time there,” Park continued, claiming that “the oversized pig” Kim Jong Un “found one of these leaflets.”

Monday’s press conference came just hours after the South Korean government released a statement arguing that leafleting activist groups are both impeding peace efforts between the two Koreas and disrupting the lives of residents in border areas.

“Guaranteeing the right to know, including providing information to North Koreans, should be done in a way that does not cause tension between the South and the North and does not take a toll on residents in the border area,” the Ministry of Unification wrote in a statement to reporters.

“Providing North Koreans access to outside information through dialogue and exchange and cooperation is a good example of improving North Korean human rights in harmony with settling peace on the Korean Peninsula and developing inter-Korean relations,” the statement continued.

Ever since North Korea first condemned the launches in June, the South Korean government took legal against activist groups by moving to revoke the corporate permits of both FFNK and Keunsaem, an organization run by Park Sang-hak’s brother, Park Jung-oh, who also attended Monday’s press conference.

Lee Hun, a representative for the two groups, rejected the South Korean government’s claims against FFNK and Keunsaem as “nonsense.” He stated that ruling party lawmakers’ efforts to ban leafleting shows that the defector-activists did not break any existing laws.

“It has been 15 years that defectors have been sending leaflets to North Korea,” he said. “We have a case legally, as well as in terms of common sense, and we can fight for our rights.”

Defector-activist Park Sang-hak on Monday promised to continue a controversial campaign to send leaflets into North Korea, promising to defy a recent order by the South Korean government to stop all propaganda send-overs.

Speaking to foreign media at the Seoul Foreign Correspondents' Club, Park — who heads the Fighters for a Free North Korea (FFNK) group — defended his organization's use of propaganda leaflets against the North.