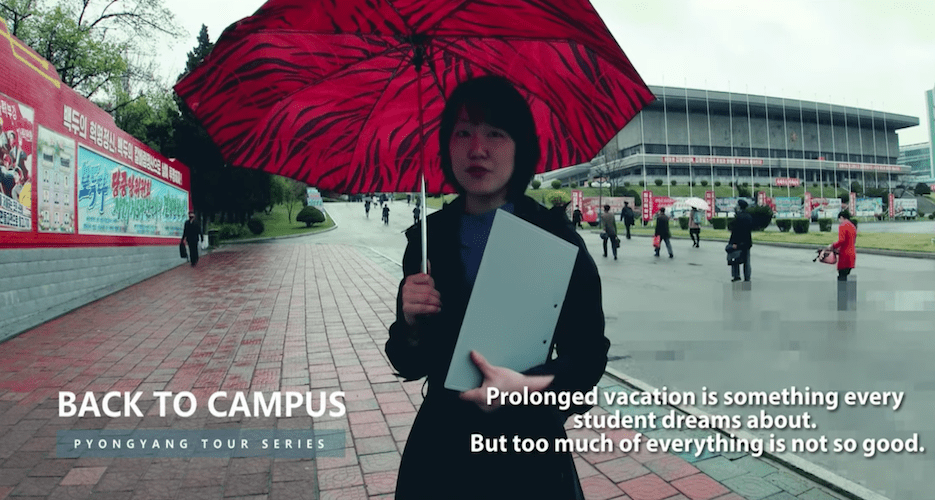 Speaking during an off-the-record background-briefing to local press, the comments came in response to a question about how the South Korean government plans to respond to marked increase in North Korean propaganda on social media and YouTube.

NK News has reported extensively on Pyongyang’s efforts to modernize its media for a more tech-savvy audience, through the use of likely sockpuppet Twitter accounts and increasingly-slick production styles.

But perhaps most notable is the emergence of North Korean YouTubers, with a new series called “What’s up Pyongyang” seeking to debunk so-called “fake news” about life in the DPRK.

“North Korea-related videos on YouTube are not subject to restriction by the South-North Exchange and Cooperation Act,” the South Korean official said Tuesday, a reference to a 1990 law which governs inter-Korean economic relations.

That law is currently in the process of being amended, in a bid by South Korea’s government to facilitate North-South exchanges and restart long-stalled economic cooperation between the two.

And while South Korea has admitted that exemptions to international sanctions would be required before substantial economic cooperation could go ahead, Tuesday’s remarks come amid a broader effort by Seoul to play down perceived obstacles to North-South exchanges.

Officials last month insisted that the country’s so-called “May 24” measures should no longer be viewed as a barrier to inter-Korean cooperation, referring to a body of unilateral sanctions Seoul imposed against North Korea in 2010.

But while the South-North Exchange and Cooperation Act may not prohibit South Koreans from accessing North Korean media on YouTube, the country’s 1948 National Security Law and other related regulations do limit access to media perceived as spreading pro-Pyongyang messages.

Laws remain in force, too: January this year saw four teachers in the city of Incheon sentenced to prison for possession of illegal North Korean texts.

But a new spate of North Korean propaganda on social media may be posing challenges for South Korean authorities, given the difficulties associated with restricting local access to online giants like YouTube or Twitter.

Speaking Tuesday, the MOU official said Seoul was planning to discuss the issue “with relevant authorities” — likely a reference to the country’s National Intelligence Service (NIS).

South Korea, they added, still needed to determine “how to respond to such North Korean videos that appear on YouTube, which is a new phenomenon which recently appeared.”

One expert told NK News that while South Korea was likely able to crack down on the content, the current administration may choose to look the other way to preserve their plans for engagement.

“I am pretty sure the South Korean state, being as tech savvy as it is and as skilled as it is at blocking banned content in other contexts, would not struggle to figure out a way to block pro-North Korean YouTube content,” said Peter Ward, a contributing analyst with NK News’s sister site NK Pro.

“It would send a message that is not in keeping with the current government’s desire to promote a peace process on the Korean peninsula and advance North-South cooperation,” he continued.

“So that seems to be the major reason why they are not interested in potentially testing through the court system whether the law is applicable while also trying to block such content.”

Martin Weiser, a researcher focusing on North Korean media, said that Cold War-era restrictions on accessing pro-DPRK propaganda were, for the most part, unenforced.

“The most recent I heard was that it is okay to watch [North Korean media], although very few South Koreans openly want to believe that,” he told NK News.

“Sharing, tweeting, liking can lead to problems but I believe courts will not sentence anyone for that.”

YouTube has also frequently taken it upon itself to purge content shared by accounts tied to Pyongyang. As recently as January, the website, citing legal complaints, removed at least six channels posting North Korean state-produced content.

Speaking during an off-the-record background-briefing to local press, the comments came in response to a question about how the South Korean government plans to respond to marked increase in North Korean propaganda on social media and YouTube.