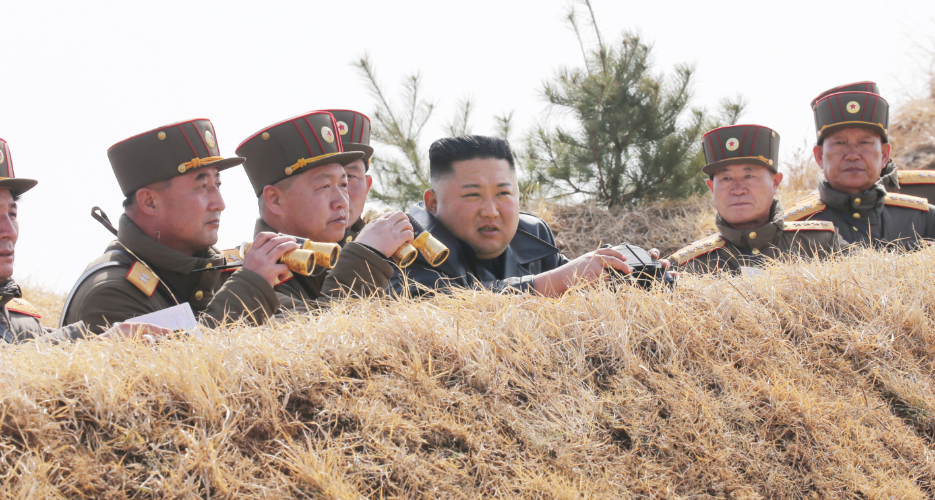 Reporting that the men of the KPA’s 3rd, 4th, and 8th corps artillery units were “greatly excited” for a chance to show off their combat readiness to the DPRK leader, the Korean Central News Agency (KCNA) said the exercise represented Kim’s “ceaseless guidance for strengthening the combat capability” of the country.

“The competition was aimed at making an inspection and evaluation of the artillery forces on the western front without notice to see how they are implementing the Party’s policy on building up the artillery force,” the report said.

It was also, it continued, intended to “awaken[] all the units and fundamentally improving all the forms, programs and methods of artillery drills and also at definitely turning ordinary drills into practicable ones for an actual war.”

The location of the drill was not stated, though state media said it took place “on the western front” and that Kim Jong Un had guided the exercise from a “seaside position.”

The North Korean leader, state media said, received a report from chief of the General Staff of the KPA Pak Jong Chon — one of several top military officials present at Friday’s drill — before giving the go-ahead to the exercise.

“As the corps commanders gave orders to fire, all the artillery pieces opened fire, showering a hail of shells on the islet,” KCNA reported.

“In the competition the artillery units on the western front showed amazing results with marksmanship which they trained in their ordinary drills and fully displayed their combat capabilities fully ready to go into action,” it continued.

“He spoke highly of them, noting that it was just like hitting the target with sniper rifle,” KCNA reported, saying the division had won an “overwhelming victory over” the other participating corps.

The North Korean leader then issued orders to the present divisions, as well as hinting that more artillery drill exercises may take place in the near future.

“The Supreme Leader gave important instructions on the direction of the military and political work, including the issue of intensifying the drills of all the KPA units, as required by the prevailing situation,” state media said.

Friday’s exercise came amid a string of reported military exercises by North Korea this month, with Kim Jong Un having last Friday attended a similar “artillery fire competition” by the KPA’s 7th and 9th corps.

The other drills led by Kim Jong Un were all held on the east coast, beginning on February 28 and followed by tests of the KN25 multiple launch rocket system (MLRS) on March 2 and March 9 held alongside other artillery fire, presented as routine, mixed “strike drills.”

But news of Friday’s drill on the west coast also came as South Korea’s military reported on Saturday morning that the country had launched what is believed to be two short-range ballistic missiles from North Phyongan Province, also on the west coast.

Pyongyang has often sought to defend such exercises as routine, lashing out at South Korean claims that the drills violate the spirit of a September 2018 military agreement between the two Koreas.

Saturday’s readout of the exercise continued that trend, framing the drills as part of broader ruling party plans to strengthen the country’s artillery forces, and refraining from references to the United States or South Korea.

State media images of the exercise also showed that, despite continued concerns about the spread of the coronavirus, the North Korean leader and military officials did not wear protective medical masks during the drill — a break from all of the last month’s drills where those around Kim were wearing masks.

North Korean leader Kim Jong Un on Friday oversaw an artillery fire competition between units of the country's Korean People's Army (KPA), state media reported, in what represents the second such contest this month.Reporting that the men of the KPA's 3rd, 4th, and 8th corps artillery units were "greatly excited" for a chance to show off their combat readiness to the DPRK leader, the Korean