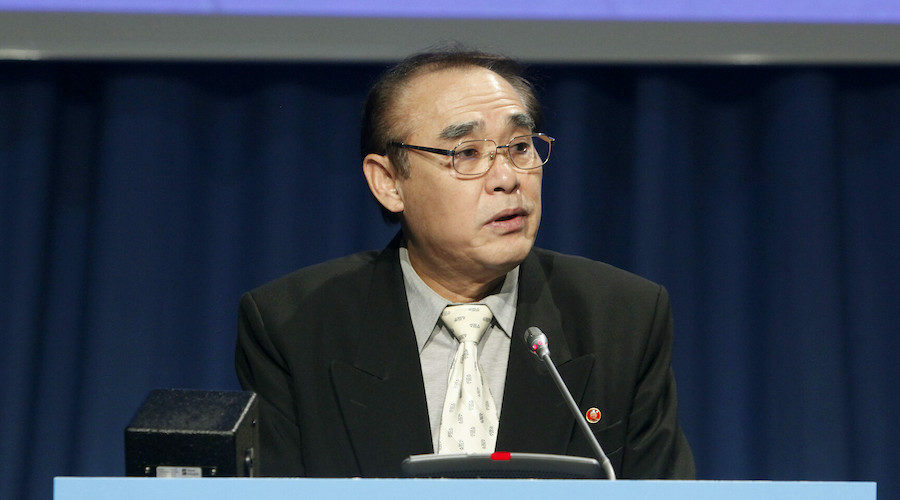 Kim Kwang Sop, the son-in-law of the late North Korean leader Kim Il Sung and long-time DPRK ambassador to Austria, is leaving his post, a statement by a UN agency this week revealed, following reports by South Korean intelligence last month that he had been recalled home.

Kim, who also served as the DPRK’s permanent representative to the United Nations Industrial Development Organization (UNIDO) in Vienna, met with that agency’s director general on Tuesday for a “farewell” meeting, a statement by the organization said.

Kim had served since 1993 as North Korea’s ambassador to Austria, and was known as an active and, by DPRK standards, convivial member of the diplomatic community in Vienna, serving as dean of the city’s diplomatic corps for several years.

A longtime acquaintance, however, told NK News in November that ambassador Kim has been suffering from health issues “over the past ten years.”

“I’ve known him for over 17 years,” Eduard Knapp, the President of the Austria-DPRK friendship association, said in an interview last month. “He has been wanting to retire for quite some time.”

“He has had problems with his back for many years,” he added. “He’s had incredible pain when sitting down.”

This week’s statement by UNIDO, which mistakenly referred to Kim as permanent representative for the Republic of Korea, follows a briefing by South Korea’s National Intelligence Service (NIS) last month in which it was reported that he had been recalled by DPRK leader Kim Jong Un for unknown reasons.

While NK News was initially unable to verify those claims, they suggested that Kim had become the second high-profile North Korean diplomat with close ties to the country’s ruling family to be recalled this year.

Kim Pyong Il, a long-time DPRK diplomat in Europe and the brother of Kim Kyong Chin, was last month confirmed to have been recalled back to Pyongyang and is now set to be replaced as the country’s ambassador to the Czech Republic.

Kim, the son of Kim Il Sung and his third wife Kim Song Ae and uncle of current leader Kim Jong Un, is believed to have fallen out of favor at home following a dispute with the-then ascendent Kim Jong Il in the 1970s.

He will be replaced as North Korea’s top envoy to the Czech Republic by Ju Won Chol, formerly a Director General of the North Korean Ministry of Foreign Affairs (MFA) Second European Department.

It’s unclear who precisely will replace ambassador Kim Kwang Sop, and no official mention of his recall has appeared in North Korean state media.

But he leaves behind a not-insubstantial team in Vienna, however, with publicly-available documents from Austria’s foreign ministry revealing seven DPRK staff in his employ at the embassy and at the country’s permanent mission to the city’s international organizations.

Some of these staff, however, could be forced to return in the near future: an implementation report to the UN’s 1718 committee by the Austrian government earlier this month reported that “fewer than 25” DPRK citizens were residing in the country.

And while the Austrian government this week said that some of its DPRK residents were “not entitled to work for remuneration,” it also added it was investigating others currently in the country.

“Austria is in the process of reviewing all relevant individual cases of nationals of the Democratic People’s Republic of Korea registered in Austria in order to ascertain whether they should be repatriated in accordance with applicable national and international law,” the report says.

One of these North Koreans may be Pak Kwang Ryong, one of the DPRK’s top footballers currently playing as a striker for SKN St. Pölten, who under UNSC resolutions will need to be repatriated by the end of the year.

But Vienna has also long been known as a hub for illicit North Korean activity in Western Europe, and served as the location for the DPRK’s only bank in Europe, Gold Star, from 1984 to 2004.

At the time of its closure, the bank — owned by the now-sanctioned Taesong Bank — was reported to be involved in money laundering and illegal arms sales and as a “base for North Korean secret service operatives,” though no charges were formally levied about the company.

Kim Kwang Sop, the son-in-law of the late North Korean leader Kim Il Sung and long-time DPRK ambassador to Austria, is leaving his post, a statement by a UN agency this week revealed, following reports by South Korean intelligence last month that he had been recalled home.

Kim, who also served as the DPRK's permanent representative to the United Nations Industrial Development Organization (UNIDO) in Vienna, met with that agency's director general on Tuesday for a "farewell" meeting, a statement by the organization said.