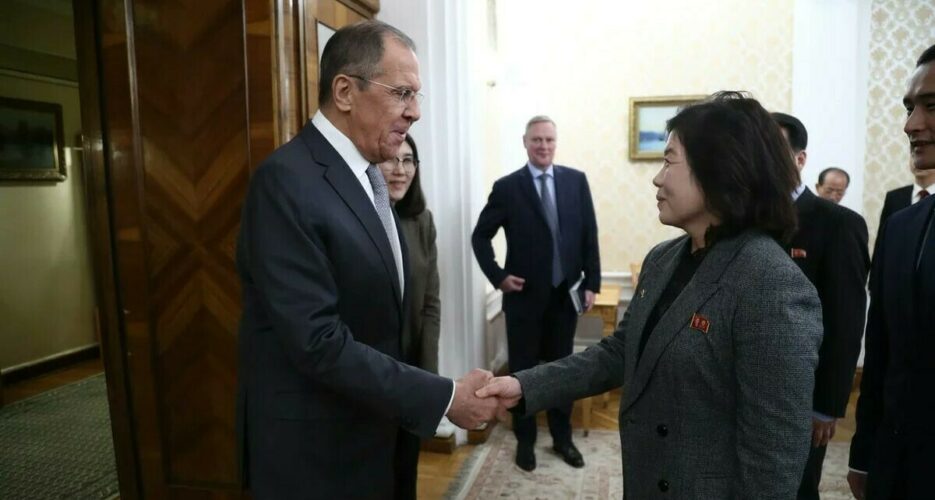 Reporting on a series of talks in the Russian capital between Choe and her Russian counterpart Vladimir Titov, as well as with foreign minister Sergei Lavrov, the Korean Central News Agency (KCNA) said the two sides had sought to build on agreements made during a historic DPRK-Russian summit in April.

“Both sides discussed the issues of further developing the friendly and cooperative relations between the two countries by thoroughly implementing the agreements reached at the historic DPRK-Russia summit meeting,” the KCNA reported it its read-out of the meeting with Titov.

“[They] had an in-depth exchange of views on regional and international issues of mutual concern and agreed to strengthen strategic cooperation,” it added.

A meeting with Lavrov, in turn, was reported to have seen “the issue of comprehensively developing, from a strategic viewpoint, the DPRK-Russia relations facing a new golden age amid the interest of the top leaders of the two countries” discussed.

In coverage of what is expected to be the first day of several rounds of talks between Choe and Russian counterparts, Russia’s MFA on Wednesday also reported the two sides had held a “strategic” dialogue and discussed the “development of bilateral relations in the context of agreements reached at the highest level.”

Neither side elaborated, however, on a purported new Chinese-Russian proposal for “a settlement of the nuclear and other problems of the Korean peninsula,” reportedly set to be presented to the North Koreans in Moscow this week.

This proposal, Russian deputy foreign minister Igor Morgulov said Tuesday, builds on previous plans of action by Beijing and Moscow for the resolution of tensions in Korea, though he did not go into greater detail about its contents.

“This proposal likely calls for mutual concessions by North Korea and the U.S.,” Artyom Lukin, an International Relations scholar at the Far Eastern Federal University in Vladivostok, told NK News on Wednesday. “It is difficult to come up with anything particularly new and original here.”

“What matters more is whether Moscow and Beijing will use their leverage over the DPRK to make it accept this plan,” he continued.

Choe’s visit to Moscow this week comes amid growing doubts that the U.S. and North Korea will be able to reach a deal in the next few weeks, with Pyongyang having set the end of the year as its deadline for diplomacy with Washington to bear fruit.

Tuesday saw foreign ministry official and key DPRK-U.S. interlocutor Kim Myong Gil stress that the country was not interested in talks without concrete steps from Washington to drop its “hostile policy” towards the North.

First vice minister Choe was on Wednesday reported to have reiterated that sentiment, suggesting that recent U.S. actions meant that Pyongyang was reluctant to discuss its nuclear program before receiving assurances of security from Washington.

“In my opinion, the discussions related to the nuclear issue might have been taken off the negotiating table,” she told reporters, in comments carried by South Korea’s Yonhap News Agency.  “I think the nuclear issue can be discussed again when the U.S. abolishes all hostile policies toward North Korea.”

Reporting on a series of talks in the Russian capital between Choe and her Russian counterpart Vladimir Titov, as well as with foreign minister Sergei Lavrov, the Korean Central News Agency (KCNA) said the two sides had sought to build on agreements made during a historic DPRK-Russian summit in April.