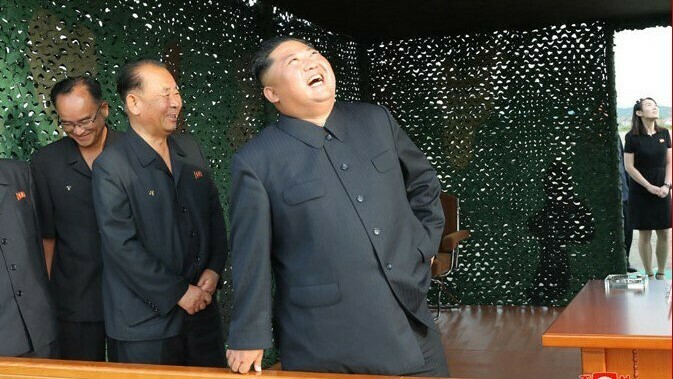 The U.S. is “disappointed” with North Korea’s continued testing of short-range ballistic missiles (SRBMs), U.S. Secretary of State Mike Pompeo said in an interview Sunday, but remains optimistic that talks between the two countries can begin in the coming days or weeks.

Speaking in an interview Sunday morning with ABC News’s George Stephanopoulos, the U.S.’s top diplomat was asked to address concerns about a now months-long impasse in diplomacy between the U.S. and North Korea.

“We know Chairman Kim has continued to make the commitment to denuclearize,” Pompeo said. “We are hopeful that in the coming days or perhaps weeks we’ll be back at the negotiating table with them.”

The Secretary of State was then asked to address a recent spate of missile tests by North Korea — most recently on August 24 — and asked whether Pyongyang had violated UN Security Council resolutions.

“Chairman Kim’s commitment to President Trump was pretty clear.  He has not yet violated that,” Pompeo responded. “It’s not that we don’t all wish – we’re disappointed that he is continuing to conduct these short-range tests. We wish that he would stop that.”

“Our mission set at the State Department is very clear: to get back to the table, to present a mechanism by which we can deliver… a full, completely denuclearized and verified denuclearized North Korea. That’s the goal.  It’s what we continue to work on.”

North Korea has consistently defended what it sees as its sovereign right to conduct missile tests, with the country’s foreign ministry in the wake of its most recent launch describing them as “defensive measures for arms modernization.”

The Secretary of State’s remarks on Sunday echo recent comments by the U.S.’s top envoy to North Korea Stephen Biegun, in a speech in which he urged Pyongyang to return to dialogue and work with the U.S. to build trust.

“To achieve further progress, the most important step we can take is for the United States and North Korea to work together to overcome the policies and demonstrations of hostility that compromise the simple ability of our diplomats to talk, and to sustain the rhythm of negotiations,” he told an audience at the University of Michigan on Friday.

Pyongyang has sought to cast a less optimistic tone on prospects for renewed working-level talks between the U.S. and North Korea, agreed to following a surprise meeting between the two countries’ leaders in late June.

And special representative Biegun in his speech Friday appeared to suggest that little-to-no contact had been made between the two sides.

“If we are to succeed, North Korea must set aside its search for obstacles to negotiations and instead seek opportunities for engagement while that opportunity lasts,” he said.

“We have made clear to North Korea: we are prepared to engage as soon as we hear from them. We are ready. But we cannot do this by ourselves.”

The U.S. is "disappointed" with North Korea's continued testing of short-range ballistic missiles (SRBMs), U.S. Secretary of State Mike Pompeo said in an interview Sunday, but remains optimistic that talks between the two countries can begin in the coming days or weeks.Speaking in an interview Sunday morning with ABC News's George Stephanopoulos, the U.S.'s top diplomat was asked to address