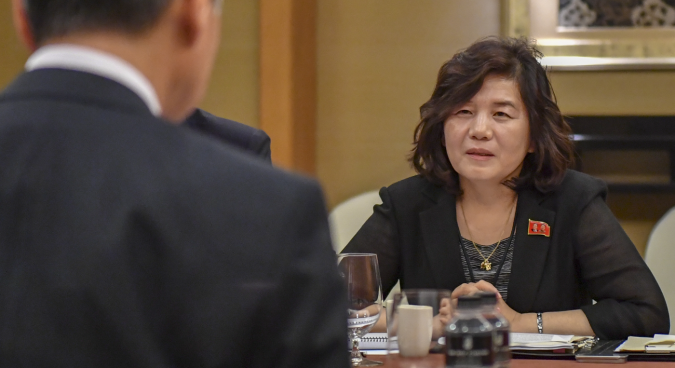 In a statement carried by the North’s state-run Korean Central News Agency (KCNA), the DPRK official indicated Pyongyang was aware of the U.S.’ recent calls for talks.

“We have willingness to sit with the U.S. side for comprehensive discussions of the issues we have so far taken up at the time and place to be agreed late in September,” Choe said.

“Kim Jong Un … clarified his stand at the historic Policy Speech in April that it is essential for the U.S. to quit its current calculation method and approach us with new one and we will wait for a bold decision from the U.S. with patience till the end of this year.”

“I think the U.S. has since had enough time to find the calculation method that it can share with us.”

But the North Korean statement also ended with a warning, saying that if Washington offered no new “calculation,” then “DPRK-U.S. dealings may come to an end.”

Choe’s statement follows remarks from U.S. Secretary of State Mike Pompeo over the weekend, who said he remained hopeful working levels would resume in the not too distant future.

“We know Chairman Kim has continued to make the commitment to denuclearize,” Pompeo said. “We are hopeful that in the coming days or perhaps weeks we’ll be back at the negotiating table with them,” Pompeo told ABC News.

Numerous high-level staffers in Washington have urged Pyongyang to return to talks, which U.S. President Donald Trump and North Korean leader Kim Jong Un agreed to during their third face-to-face meeting at the end of June.

Speaking on Friday, U.S. point man on North Korea also urged the DPRK to return to negotiations during a speech at the University of Michigan.

“To achieve further progress, the most important step we can take is for the United States and North Korea to work together to overcome the policies and demonstrations of hostility that compromise the simple ability of our diplomats to talk, and to sustain the rhythm of negotiations,” Biegun said.

But one expert urged caution in hoping for too much from the development.

“Biegun’s plea seems to have piqued Pyongyang’s interest,  but I wouldn’t get too excited,” Ken Gause, a North Korea leadership expert at CNA told NK News.

“North Korea is going to come in receive mode to see whether there has been a change in the U.S. position.”

At the time of writing, the U.S. Department of State had not replied to request for comment on the DPRK’s statement and whether there had been a change in Washington’s stance.

Choe’s statement contrasts with her last public statement on August 31, when she said that hopes for talks with Washington were “fading” after Pompeo referred to North Korea behavior as “rogue.”

“Perhaps it was also tied to recent North Korea-China engagement and the belief that waiting further would make the North Koreans look like they’re acting in bad faith and invite added pressure from the Chinese and the international community. We also have to consider the bureaucratic and political possibilities.”

But Oba also welcomed the North’s statement, though cautioned that Washington and Pyongyang had yet to resolve any of the fundamental problems that led to the current impasse.

North Korea is willing to return to denuclearization talks with the U.S. in late September, vice foreign minister Choe Son Hui said on Monday.In a statement carried by the North's state-run Korean Central News Agency (KCNA), the DPRK official indicated Pyongyang was aware of the U.S.' recent calls for talks."We have willingness to sit with the U.S. side for comprehensive discussions of